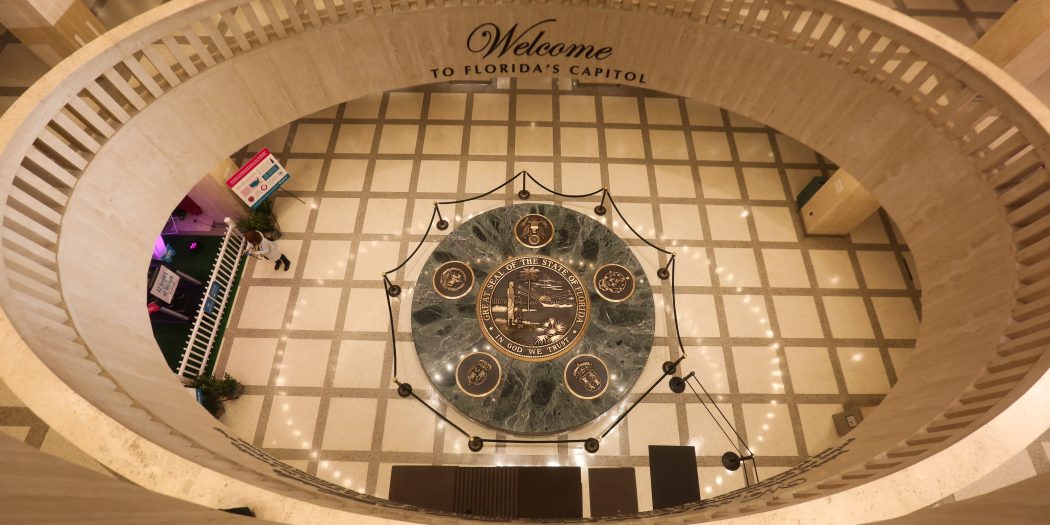 Florida prohibits even people with weapon permits from carrying their guns inside legislative or committee meetings, but they can carry in the building itself. (Fresh Take Florida file photo)

Ahead of warnings about possible armed protests at Florida’s Capitol in Tallahassee so dire that legislative leaders urged employees to stay away, a surprising oddity emerged: It’s lawful for some citizens to carry guns inside the Capitol.

House Speaker Chris Sprowls also urged staff to stay away Sunday. Tallahassee’s mayor said he was aware of reports of potential violence at capitols, but there was no specific threat intelligence related to Florida’s Legislature.

But even in such a politically charged environment, Florida law allows citizens with concealed weapons permits – more than 2.2 million people – to carry guns inside the Capitol. They can walk armed under the Rotunda, roam the corridors, visit lawmakers’ offices or scan the city below from the 22nd-floor observation deck. During the spring legislative sessions, as many as 5,000 people may be inside the Capitol.

Gov. Ron DeSantis, Florida’s lieutenant governor, attorney general and others also have offices in the Capitol. DeSantis said this week Florida will be ready: “I don’t care why you are doing it. You are not doing it here,” he said. “If there’s any type of disorder we will have the reinforcements there.”

Florida does prohibit people with or without a weapon permit from carrying guns inside legislative or committee meetings. Public attendance in committee meeting rooms is also limited right now due to the coronavirus.

Still, an armed citizen with a permit will be allowed with a loaded gun inside the Capitol after passing through the building’s metal detector and security checkpoint, said Gretl Plessinger, a spokeswoman for the Florida Department of Law Enforcement, which oversees the Capitol Police.

The House sergeant at arms, Russell Hosford, reminded newly elected lawmakers just last month that guns may be among them: “You can carry at the Capitol complex with an approved concealed weapons permit,” he said during a training panel on defending lawmakers from shootings in the building. At the same panel, Capitol Police director Mark Glass called it a “blessing” that most Floridians don’t realize they can legally carry loaded guns inside the Capitol, so many don’t even try.

In the wake of the deadly assault on the Capitol in Washington, some lawmakers want changes in Florida, too.

Another Democrat, Rep. Carlos Guillermo Smith of Winter Park, also endorsed tightening restrictions on guns inside the Capitol, although he acknowledged changes were unlikely. “The fact that people can just walk into my office armed, and that be OK, concerns me,” he said.

Rep. Anna Eskamani, D-Orlando, said restrictions due to the pandemic have limited public access to the Capitol to those with appointments, and said new security measures being added may include more cameras around the building.

Rep. Anthony Sabatini, R-Clermont, one of the Legislature’s staunchest gun rights advocates, said he and other state lawmakers carry their own concealed guns in the Capitol. He said he supports openly carrying guns in the Capitol and other government buildings. This year Sabatini has again proposed allowing people to carry guns on college campuses.

Sabatini, who missed some committee meetings this week because he was in quarantine from a COVID-19 exposure, said he sometimes carries his gun inside legislative meetings – even though that would be explicitly prohibited under state law. A reporter called him back to be sure there was no misunderstanding.

“I carry everywhere I go,” Sabatini said. He said he has no special dispensation to carry a gun during legislative meetings.

Hosford, the sergeant at arms, declined to discuss whether or how lawmakers might be exempt from Florida’s laws prohibiting guns inside legislative or committee meetings.

Christopher is a reporter for WUFT News who can be reached by calling 352-392-6397 or emailing news@wuft.org.
Previous Untold Florida: How Do School And District Grades Align In Those Statewide Reports?
Next The Point, Jan. 15, 2021: Florida Law Allows Guns Inside Certain Parts Of Its State Capitol