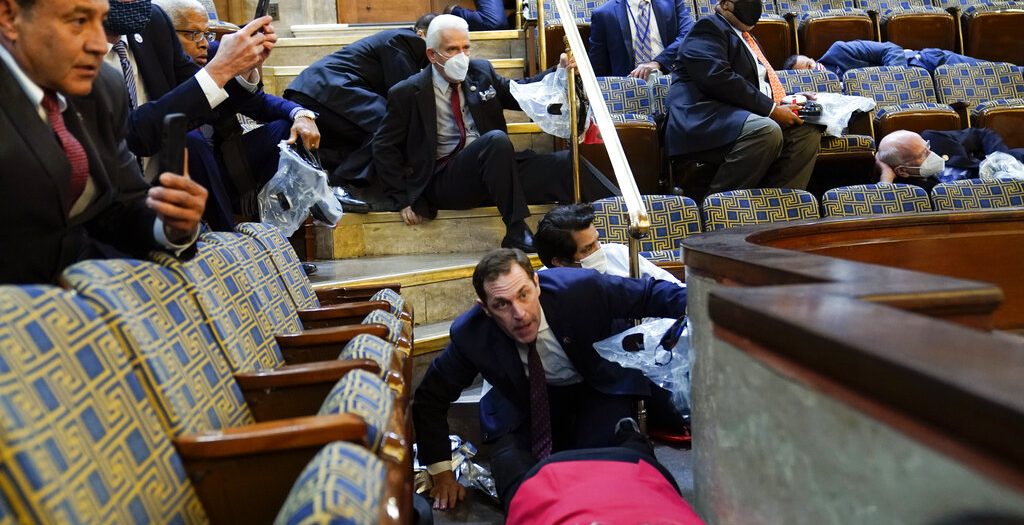 People shelter in the House gallery as protesters try to break into the House Chamber at the U.S. Capitol on Wednesday, Jan. 6, 2021, in Washington. (AP Photo/Andrew Harnik)

By Associated Press and WUFT News

WASHINGTON — Angry supporters of President Donald Trump have stormed the U.S. Capitol in a chaotic protest aimed at thwarting a peaceful transfer of power.

They have forced lawmakers to be rushed from the building and interrupted challenges to Joe Biden’s Electoral College victory. Trump issued a restrained call for peace but did not call on his supporters to leave. Earlier, in a huge rally near the White House, the president had egged his supporters on to march to Capitol Hill.

U.S. Rep. Kat Cammack, R-Gainesville, posted updates on social media Wednesday afternoon, first describing her plans to object to the results of the November election, and then asking for peace.

On the House floor, getting reports of buildings being locked down and evacuated. No matter what, peace must prevail. As we fight for our Constitutional Republic on the House floor, I am asking everyone to please remain peaceful and respect the Capitol police doing their job.

We are locked in the House Chamber. They have suspended debate. We have just been briefed the Capitol has been breached. They are asking us to put on masks for tear gas. Violence has no place in our politics. This needs to stop now!

My staff and I are now safe, away from the Capitol. Please pray for our law enforcement and for peace.

At 6:43 p.m., as lawmakers were preparing to return to their chambers to finish their work, Cammack issued this statement. Hours later, she voted with 137 of her Republican House colleagues to object to the certification.

“As of this writing, my staff and I are safe and in a secure location after evacuation by Capitol Police.

“Today, while objecting to the electoral college certification of states with explicit election irregularities, the Capitol was breached by protesters. The situation escalated quickly with members being notified that nearby buildings were being breached. Midway through debate on the objection of the Arizona certification, protesters began attempting to breach the House Floor. In response, Capitol police barricaded the doors and Members were instructed to prepare their evacuation hoods in anticipation of tear gas being deployed. As attempts to gain entry into the chamber grew in intensity, I witnessed fellow Members joining with Capitol Police to further barricade doors by piling furniture. They also began breaking furniture to provide themselves with any means of defense they could find. Within minutes, the sounds of shots began coming through the door. We then began evacuating quickly out of the chamber to a safe location.

“I am currently with my staff and colleagues and will share with you what I have shared with them.

“What has transpired here today is unacceptable. Anything less than a full condemnation of this violence is unacceptable. My constituents sent me to Washington to fight for their rights and to be their voice.

“In the midst of fighting a legitimate and most serious objection to the certification of the states with egregious election violations, we were stopped. We were stopped by people not intent on fighting for our Constitutional Republic and our constitution; instead they wanted to tear it down.

“We as a nation have lost too many in the name of service to our Republic. My own family has given much in service to our country from my grandfather who served and was a POW in Nazi Germany to my own brother who served overseas in Iraq. As I write this statement, my husband, who is a first responder, is by my side.

“Anyone who believes that the violence our country has seen as of late is okay, is wrong. Any groups promoting hate or the overthrow of our Republic is, in fact, trampling the flag and Constitution we hold so dear. It is also a slap in the face to every serviceman and woman who has given so much to our nation. Any violence, past or present, I have condemned and will continue to condemn.

“My message is simple. Violence will not be tolerated. If you attack the Capitol, you attack this country. I will fight endlessly to protect our Constitution and the Republic from tyranny. I condemn in the strongest of terms any violence perpetrated by any group.”