Since Gainesville Chinese School moved to online learning due to the pandemic, Chien Wang’s two children have missed not only their in-person lessons, but also the snack breaks in between.

“Those 10-minute breaks are where the kids are able to hang out with each other, where they know other kids who look like them, and whose parents look like their parents,” Wang said.

Her children, Moka, 6, and Mika, 8, have attended the school for two and three years, respectively, learning Mandarin, Chinese culture, history, art and more. This fall, however, they had to connect with their heritage via a computer screen, miles away from the classroom.

“The computer at home is a toy – it’s for leisure,” Wang said. “Now, you have to turn a toy into educational equipment. That was hard for them to grasp.”

Gainesville is home to two of Florida’s 11 Chinese heritage schools, according to the National Council of Associations of Chinese Language Schools. Like schools of any kind across the country, the two local ones – Gainesville Chinese School and Hua Gen Chinese School – shut down when the pandemic took hold in March and are now operating online.

But unlike their general education counterparts, the two schools were faced with teaching the intimacies and intricacies of an entire culture virtually.

Gainesville Chinese was started in 1989 by Taiwanese Americans looking to establish a cultural haven for their community in the city. The school, which offers weekly supplemental language and cultural classes on a semester basis, normally operates out of Oaks Church off Archer Road.

Ping Jung Huang was the school’s director of online academic affairs when the switch to online learning was initiated. The school operates on a nonprofit basis, and the teachers and administrators are all volunteers. Ten students enrolled this fall, which Huang said is typical.

She said because the school relies on hands-on activities and social learning, it’s been hard maintaining a connection with students.

“In March, I couldn’t get my students to focus, or they could focus but for a very short amount of time,” Huang said.

Since the spring, the school has adopted online programs like Kahoot, Quizlet, ClassDojo and more to foster the feeling of personal and stimulative learning for students, she said. 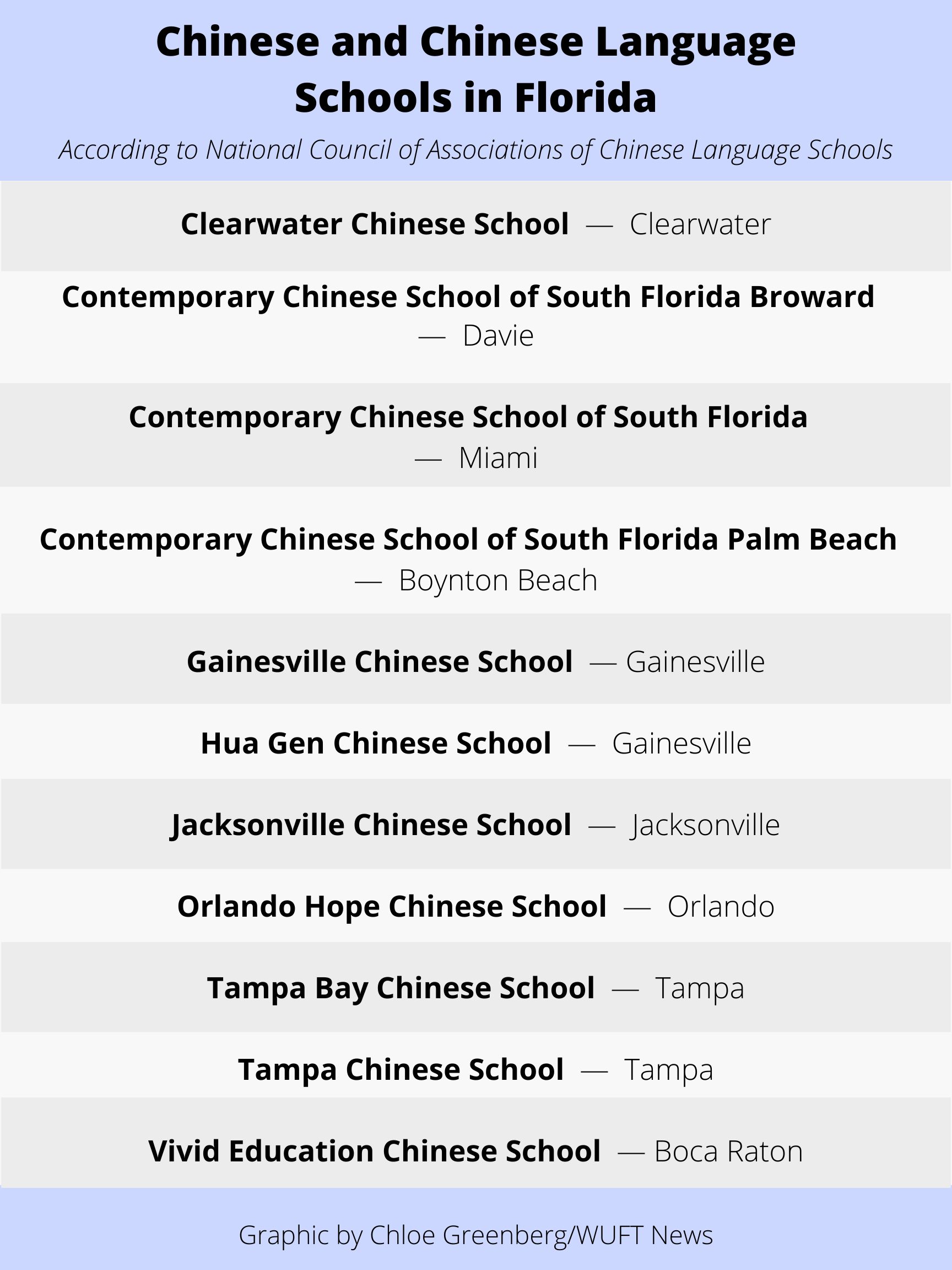 Although the students can no longer create artwork and sing songs seated together, Huang said other learning options are being used to help connect them with the Chinese culture.

The increased use of computers and online classwork led the school to begin teaching lessons on typing in Mandarin, something the school had not done before. Classroom games have been replaced with a Chinese version of the popular online multiplayer game Among Us.

Another supplemental writing opportunity – a pen pal program – is allowing the Gainesville students to connect and share stories with peers in New York, Taiwan and Sweden.

Principal Michi Liu has been active with Gainesville Chinese since 1993, when her oldest son began attending. All three of her children took lessons there, and Liu has taught and or served as principal on and off since 2004. She said not much had changed – until March.

“For us, it’s a pretty big challenge,” Liu said. “We have to make the classes interesting. Otherwise, it’s going to be boring, because there is no action between teachers and students.”

Before the pandemic, she said, the school regularly participated in local culture-focused events and programs. She hopes to continue doing so in the future, but for now, that is all on hold.

Yao Dai, Hua Gen’s principal since 2017, said the school’s instructors have had to learn how to keep students engaged in their heritage and language lessons virtually.

“At the beginning, they’re not very sure what’s going on, because it’s their first time to have that online experience,” he said.

While it typically holds soccer, chess, dancing and yo-yo classes, Hua Gen now focuses only on Mandarin, conversation and cultural instruction, as well as advanced placement Chinese, all of which transitioned online more easily, Dai said.

In an average semester, Hua Gen has between 180-200 students, ranging from ages 5-15. Now, Dai estimates, the enrollment is about 100. He attributes the decrease to not only there being less classes offered, but increased concerns from parents as well.

“A lot of parents would like to teach the kids themselves, or they’re concerned about too much screen time,” the principal said.

Some Hua Gen teachers, many of whom are volunteer-based parents of the students, have begun splitting normal class times into multiple sessions each week. That’s to better keep the students’ attention and increase their exposure to new material without tiring them out.

It’s not clear what the next semester will hold for Hua Gen in terms of classroom delivery, Dai said. Regardless, he said, whether online, in person or some combination of the two, the school plans to continue connecting the local Chinese community with its heritage.

“The effect may not be as good as on-site,” he said, “but … the students that have enrolled in online class – they still learn.”

Chloe is a reporter for WUFT News who can be reached by calling 352-392-6397 or emailing news@wuft.org.
Previous The Point, Jan. 5, 2021: Alachua County Answers Questions About Local COVID-19 Vaccine Rollout
Next Lu The Homosassa Hippo Is Getting Older, But He Still Draws A Crowd