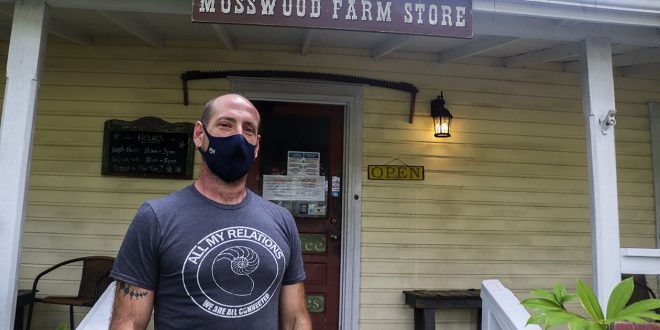 Joe Pierce said while the cancellation of Micanopy's fall festival is making the holiday season a bit tighter, his business, Mosswood Farm Store and Bakehouse, is not doing considerably worse than prior years. (Chasity Maynard/WUFT News)

Micanopy Set To Turn 200, But Pandemic Disrupting Plans for Celebration

The once in a century pandemic is causing havoc on plans by Micanopy, the state’s oldest inland town, to celebrate its bicentennial in 2021.

Named after a Seminole chief, Micanopy became the first distinct town in the Florida territory  in 1821. It survived two bloody battles during the Second Seminole War, between 1835 to 1842, in what was among the longest and most costly conflicts between Native Americans and the U.S.

But the town has never seen anything like COVID-19. Its goals for a 200th birthday fete have suffered due to social distancing and safety concerns, according to some of the people involved in the commemoration planning.

The Micanopy Historical Society wants to host a theater performance and other related events, but that all depends on the state of public health in 2021, said John Thrasher III, 92, the organization’s archivist.

“It’s sad,” Thrasher, who served as the society’s founding president in 1983, said of the pandemic-related setbacks. “Nevertheless, it doesn’t diminish the fact that the history is important to us. The town is important.”

“It’s kind of slow at this point,” Vallejo said of the bicentennial planning. Also a member of the group organizing celebrations for Gainesville’s 150th anniversary in 2019-20, she noted that many of its events were postponed or canceled because of COVID-19.

Micanopy has been quiet overall during the pandemic.

The Micanopy Fall Festival, an annual event attracting thousands and widely considered the most profitable weekend of the year for townsfolk, was canceled. Many local business owners don’t know if they can count on income from snowbirds because of travel-related health risks.

“That’s our biggest weekend,” she said, “and we rely on that, really, for a lot of our sales.”

The retired nurse said she joined Micanopy 2021 because the 200th anniversary is a big milestone, and because she thought participation from all of its shops would be important.

Castenholz also said while it’s a shame how the pandemic has affected the festival and celebration – the coming months may not be any better.

“As shop owners … we rely on the snowbirds, and we rely on these people that are all coming down,” she said. “I don’t know what this season’s even going to be like.”

Joe Pierce, owner of Mosswood Farm Store and Bakehouse, said while losing the festival will make the holiday season a bit tighter, his business is not doing worse than prior years.

“It hasn’t been a death knell or even like a gloomy, scary situation that we might not make it because of this or anything like that,” the bakery owner said. “We’ve been lucky.”

Vallejo said honoring the bicentennial would help the community recover from a horrific 2020.

“It’s been a hard year,” she said. “To create a space to celebrate this little town, which is a gem of a town, would be lovely, would bring spirits up and get people to join together.”

Chasity is a reporter for WUFT News who can be reached by calling 352-392-6397 or emailing news@wuft.org.
Previous Gainesville Moving To Require Businesses To Regulate Shopping Cart Containment
Next Police: Former Florida Lawmaker Arrested In Haiti On Weapons Charge