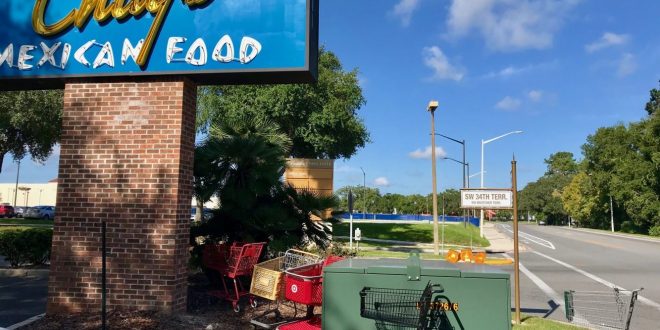 In August, the Gainesville City Commission adopted an ordinance requiring businesses to install retention systems to keep their shopping carts from being discarded in the community. (WUFT News file photo)

Mark Cowan sees fewer abandoned shopping carts blighting his Gainesville neighborhood than when he complained to city officials about them in 2019.

“I think something good has happened,” said Cowan, 67, who lives near the E.D. Manning Jr. Administration Annex in Southwest Gainesville. “I used to see them at more locations.”

What happened? In August, the City Commission adopted an ordinance requiring businesses to install retention systems to keep their shopping carts from being discarded in the community.

“Seems like a good idea to me,” Cowan said of the ordinance which took effect Nov. 6.

Businesses without a shopping cart retention system risk getting a $250 fine for each offense.

“We’re not trying to penalize anyone by any means,” Commissioner Gigi Simmons said. “We are just trying to keep our communities safe.”

Commissioner Adrian Hayes-Santos recalled not reporting an abandoned cart he saw near his house last year, saying he wanted to see how long it would take for the cart to be removed.

Several possible retention plans are outlined in the ordinance. A wheel-locking mechanism activated by an electronic barrier around the location’s perimeter is one option. Another is a required refundable deposit for customers using a shopping cart within the place. Stores that already have adequate measures in place must still notify the city so it is recorded.

The city sent letters about the ordinance to 135 local business owners, said Juan Castillo, a planner who works in the city’s sustainable development department. As of last week, no citations had been issued to any businesses yet, as only three retention plan applications had been approved. All three businesses already had a retention system in place, Castillo said.

Castillo said the city is reviewing seven pending applications. In the meantime, if someone complains about a business not complying with the ordinance, it could still be penalized, he said.

Gainesville is among 33 Florida counties and municipalities to regulate shopping carts.

Florida law requires owners to retrieve their abandoned carts when notified of their location. Some cities impose additional penalties and fees when one is found off their property.

Ocala’s ordinance requires shopping cart owners to have retention systems in place, unless the business files a petition for exemption. Gainesville stores do not have this option.

Gina Hawkins, executive director of Keep Alachua County Beautiful, said the ordinance should help with environmental issues attributed to abandoned carts. Hawkins said her team has pulled some out of creeks in the past, as they contributed to flooding and damage to natural habitats.

“We’ve wanted something like this for over 20 years,” she said.

However, not everyone is excited about the ordinance. Prashant Patel, owner of India Bazaar, an Indian grocery on Southwest 34th Street, does not think his business needs a cart holding system.

“We have good clients,” Patel said. “They use the shopping carts and put them back.”

The shop recently had a sign posted by its cart holding area asking customers to return them to the designated area. The extras were chained to a corral for more security.

Shopping carts can cost as much as $200 a piece, said Rossana Passaniti, public information officer for Gainesville. The cost of containment systems varies based on the type installed and the number of carts a shop has. For large retail stores, it may cost thousands of dollars.

When Kissimmee first attempted to implement a shopping cart ordinance in 2000, it met with resistance by members of the Florida Retail Federation. The federation argued that the measure was unconstitutional under state law. A state circuit court judge agreed, but an appeals court reversed that decision, arguing that the city’s ordinance was constitutional.

The costs associated with the Kissimmee measure were limited to expenses keeping carts on the owner’s property, not fines for those being found on public property.

Passaniti said the Gainesville ordinance may prove to help affected businesses save money.

“Certainly holding on to the ones they have, they wouldn’t have to replace them at additional costs,” she said.

Simmons said the community is already benefitting since the measure was approved.

“Having an abandoned shopping cart ordinance in place is one way to make sure our residents are safe, and their neighborhoods are clean and sightly,” she said.

Addison is a reporter for WUFT News who can be reached by calling 352-392-6397 or emailing news@wuft.org.
Previous Mutts, Masks And Modifications: How Veterinarians Are Handling COVID-19
Next Micanopy Set To Turn 200, But Pandemic Disrupting Plans for Celebration