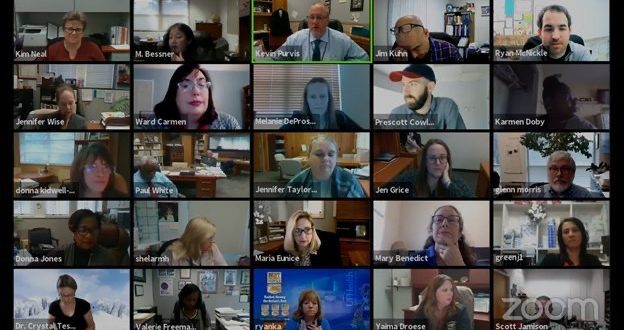 The county’s school board voted in October to create the task force. The group met for the first time Thursday afternoon to review districtwide pandemic protocol, discuss the state of the coronavirus in Alachua County public schools and outline plans for the spring semester.

The team includes school board administrators, health experts from the Alachua County Department of Health as well as members of the district’s Scientific and Medical Advisory Committee, district staff, parents, teachers and a student representative.

Dr. Eric Nelson, a member of the scientific committee and an assistant professor of pediatrics at the University of Florida, said the group must anticipate the new challenges coming up with the holiday season and spring semester.

“I’ve been tracking the innings of the COVID-19 game, and I think we’re in either inning five or six,” Nelson said, using a baseball metaphor, “which means this is a nine-inning game, and we have quite a ways to go, and I think everyone knows that you can lose games in the eighth and ninth inning.”

Paul Myers, Alachua County Health Department administrator, presented updated COVID-19 data at the meeting. He said Alachua County has seen no further spread of the virus resulting from students returning to school following quarantine periods, which has saved the district 2,600 instructional days, a term the district calculates by summing all of the days that previously quarantined students did not miss after returning to school.

“Here’s another metric you may all not be aware of —  Alachua County has the lowest pediatric positivity rate for COVID-19 in the state of Florida,” Myers said. “And that is a community effort.”

The district has until Dec. 15 to submit a template for the spring semester addressing the requirements of the executive order. This includes a more frequent progress monitoring system, a full range of services for both online and in-school learners and expanded learning opportunities, like tutoring, for students not making adequate progress — especially those learning online.

The plan also will address declining overall student attendance — there’s been a 12% increase in absences this first quarter over last year, according to district spokeswoman Jackie Johnson.

Jennifer Wise, the school district’s director of K-12 curriculum, said that for digital academy students, this could mean returning to in-person classes or transitioning to e-school, where the student picks the pace and hours of schooling.

“Instructional minutes are precious, and there’s a direct correlation between the number of days and hours and minutes of school you miss and how well you perform academically,” Wise said. “We need to ramp up our efforts to find and get all of our students in school and attending school, no matter which option they’ve chosen.”

Mary Benedict, president of the Alachua County Council of PTAs and a task force parent representative, said she was relieved to hear that the district will keep online students on task and in mind while drafting the plan for the spring semester.

“It’s hard because the only thing you can do as a parent is sit there all day and try to keep them on task, and not every parent can do that,” Benedict said. “They’re just not being as engaged, and those are probably the kids that need to go back to in-person classes.”

Kim Neal, a director in the office of zoning and student assignment, told the group that the percentage of students enrolling in in-person classes had increased to 61%, while the percentage of digital academy and e-school students had decreased steadily since the beginning of the fall semester.

Alexsia Hill, 14, is a ninth-grade student at Gainesville High School who decided to return to face-to-face classes for the fall semester after experiencing the difficulties of online learning in the spring.

“A lot of people’s grades were falling because of the lack of communication between the teachers and the school board,” she said.

Hill, who is not a member of the task force, said her online peers struggled to keep up with the workload and the complicated interface.

“I hope they figure out a way to get the online students to catch up and keep their grades up,” she said.

For Shauna Quirk, a second-grade Digital Academy teacher at Glen Springs Elementary, the meeting didn’t seem to present any substantial new information. She said she opposes forcing students to attend school in person if they struggle with online learning.

“It is highly likely that a child struggling in Digital Academy would struggle on site also,” she said.

Quirk, who is not on the task force, said the district should have provided more support for its digital students as well as its teachers. When the district shifted to online instruction, elementary schools were given the Alachua e-school curriculum to adapt for the Digital Academy, which not only complicated the transition to online learning further, but also took creative license away from teachers.

“It can’t just be an innovative learning environment; we have to be able to let them innovatively learn,” Quirk said. “They [teachers] want the students to be engaged; they want the content to be current and have meaning and have life.”

For some students, the frustrations with the pandemic extend beyond the difficulties of online learning.

Quirk’s daughter, Evelyn, 11, is a Lincoln Middle School sixth-grader who is frustrated with the district’s push to return to in-person schooling. Her mother said Evelyn believes school officials are underestimating the risks posed by students attending face-to-face classes.

“Kids do get it, but aren’t affected by it, but still play a huge role in passing it on,” Shauna Quirk said.

Over the summer, Evelyn wrote a letter to school district officials to relay her concerns about the district’s handling of the pandemic.

“So I want you to remember me when you get that extra funding and your schools are rebuilt and new and ask yourself, was it really worth families standing over the graves of teachers, janitors, lunch staff, bus drivers, school staff . . . children?” she wrote.

“I get goosebumps even thinking about it,” her mother said about the letter. “They’re gonna be so much more politically aware than I was at their age, for sure.”

Nushrat Nur is a fourth year journalism student and reporter for WUFT. You can reach her at n.nur@ufl.edu.
Previous The Point, Dec. 9, 2020: That Mall Visit To See Santa? In 2020, It’s Different 🎅
Next Marion County Technical College Acquiring Freightliner Truck For New Commercial Class B Driving Program