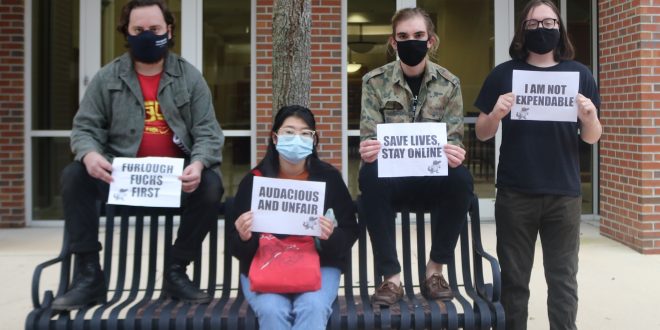 From left, Eli Barrett, Ashley Nguyen, Charles Karcher, and Jacob Giner, members of a Gainesville chapter of Young Democratic Socialists of America, protested outside Emerson Hall after speaking at the UF Board of Trustees meeting. Outside the building, they stood and handed out signs and stickers after being told to leave the meeting room due to social distancing restrictions. (Carolina Ilvento/WUFT News)

UF Faculty, Student Organizations Protest Against Spring Reopening During Board of Trustees Meeting

With less than six weeks before the start of the spring 2021 semester — and first large-scale in-person classes since the March 2020 lockdown — the University of Florida held its first in-person Board of Trustees meeting on Friday.

Coronavirus was not on its official agenda, but protesters ensured that board members continued to hear disagreement with the university’s decision to offer a majority of classes in person. The meeting occurred at the end of the week in which UF surpassed Clemson University for the most cumulative COVID-19 campus cases in the nation — 5,467 at UF to 5,391 at Clemson — as of Saturday morning.

The floor was opened to public comment for the meeting’s last session, allowing 16 outside speakers to share their thoughts to the Board of Trustees.

Strict social distancing measures were enforced, as only three speakers were allowed in the meeting room at a time. They each had the floor for three minutes.

Paul Ortiz, president of the university’s faculty union, emphasized the risk of increasing faculty’s direct contact with students who have not been taking safety measures to prevent the spread of the virus.

“We believe it is not right to force faculty who have health conditions back into classrooms where they are going to be inherently unsafe,” he said. “We are not asking to not work. We are working harder than ever.”

On Thursday, during the first portion of the two-day meeting, trustees outlined measures and policies that will determine what campus life will look like next semester.

They specified that testing for COVID-19 will be enforced biweekly to all students taking in-person classes.

Spring 2021 will offer 8,112 in-person sections, more than double of what was offered in fall 2020. It’s still a difference of about 2,000 fewer in-person sections than spring 2020, before the virus took hold in Gainesville.

Protestors at the meeting directed their indignation over the reopening push mostly toward President Kent Fuchs and the Board of Trustees.

A few of the protestors compared UF’s push at becoming a top five public university while also becoming the university — public or private — with the most COVID-19 cases since the start of the pandemic.

Outside speakers had the floor for nearly an hour of the meeting, although it’s unclear how many of their points were actually taken into consideration or even heard by the trustees.

As protestors spoke, there was an air of disinterest among several of the trustees in the room, as they opted to look anywhere but the podium. Ashley Wen, a member of Young Democratic Socialists of America, began her speech by asking trustees to get off their phones, suggesting that not one of them seemed interested in listening to what they have to say.

“We are going to raise hell in this university if you continue with these dangerous and irresponsible plans to hold face-to-face classes in spring 2021,” she told them.

Another notable outside speaker was Gainesville City Commissioner Harvey Ward.

“Off-campus social gatherings are the top drivers of coronavirus at colleges,” Ward said. “We all know… if we’re being honest with ourselves, that if we’re inviting more students to be inside classrooms everyday, then they are going to be outside of campus as well.”

He said he doesn’t want to see cases spiking up and more lives being lost in spring due to the decision to reopen.

He concluded his speech by asking: “Please — please! Make the decisions that help students learn; that keep students healthy; and keep our community healthy.”

Once the last speaker’s time was up at the podium, UF’s Senior Vice President for Health Affairs and President of UF Health David Nelson took time to respond to some of the public comments made.

Crowds immediately began chanting and singing from outside the room. Doors were closed to keep the noise out, but their voices could still be heard: “They are killing us for money. Profit over people!”

Talking over the loud chants, Nelson said, “I fully understand and empathize with the anxiety, but it is not fully backed-up by the facts.”

Listing safety measures like contact tracing and mass testing that UF has implemented, he added, “We have gone out of our way to make sure that every faculty member is safe.”

Provost Joseph Glover also spoke to clarify that no students will be forced to take in-person classes and biweekly testing will be enforced to any of those who choose to do so. He also added that they are open to amending the spring plan if UF Health and its doctors deem it necessary and update safety guidelines.

Glover concluded: “We should all be comforted by the fact that, on this campus, we are being guided by science and by medicine.”

Carolina is a reporter for WUFT News who can be reached by calling 352-392-6397 or emailing news@wuft.org.
Previous Gainesville School Participates In International Concert Exchange For World Disability Day
Next The Point, Dec. 7, 2020: Florida’s Coronavirus Death Total Is Approaching 20,000