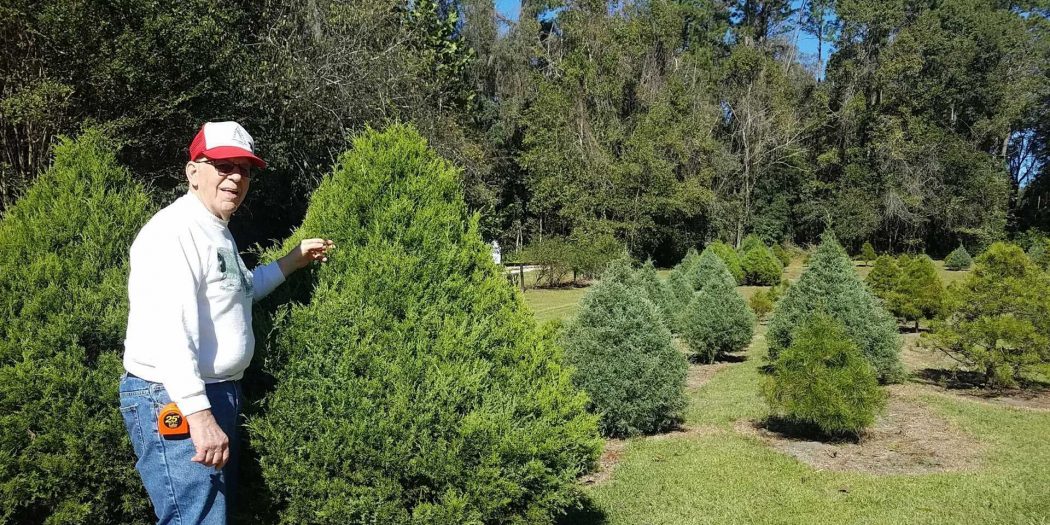 John Gregory and his wife Cathryn sometimes don’t agree on the pricing of the trees from their Christmas tree farm in Gainesville. He said his wife likes to “give them away cheap,” while he likes to charge a "fair price." (Ellen Bausback/WUFT News)

John and Cathryn Gregory often sold out of their 300 trees within a week of opening Unicorn Hill Christmas Tree Farm in Gainesville each December since 1984.

Taking care of 15 acres by themselves was proving too much for the couple, both 76, so the Gregorys had decided 2020 would be the farm’s last year in operation.

With the property on Northwest 39th Avenue offering plenty of room for social distancing, the Gregorys did not fear COVID-19 would hurt sales. Last week, however, they learned they may have been exposed to the coronavirus after visiting with a relative who later tested positive.

Opting to keep the community safe, the couple decided that Unicorn Hill Christmas Tree Farm’s final season before retirement will have to wait another year. It wasn’t an easy decision.

“We just sat around here kind of numb for a while, trying to figure out what we should do,” Cathryn Gregory said.

“Maybe it’s God telling us we’ve got to quit,” said her husband of 52 years.

They said theirs is the oldest Christmas tree farm in Gainesville, but it’s also a dying breed.

There used to be more than 100 Christmas tree farms across the state, but in recent years that number has dwindled to less than 20, John Gregory said.

“We are all old,” he said. “It just turns out that some people just don’t want to do it anymore, so they just retire, and their farms are gone.”

Keeping a Christmas tree farm during the year takes constant watering, fertilizing, trimming and chasing away the young male deer who like to rub their velvety antlers against the trunks, Cathryn Gregory said. Other problems include fighting plant diseases like needle cast, which makes trees turn brown and dry as if they’d been burned, she said.

The couple hires staff members during the holiday season to operate the cash register and tree-shaking machines, but otherwise they have been taking care of the farm themselves.

Michael Songer, 77, president of the Florida Christmas Tree Association and owner of a farm in Middleburg, attributes the decline of the industry to increasing property prices.

“A kid just can’t graduate from high school and go out and buy 40 acres of land,” Songer said.

He, too, is worried about the pandemic and his health, but as of now his farm will remain open.

Sue Kossuth, 74, who opened the 72-acre BK Cedars tree farm in Alachua City with her late husband in 1980, is more optimistic about the pandemic and Christmas tree farming overall.

Kossuth each year sells around 400 potted Christmas trees that customers can replant in their  yards. She also delivers trees to retailers statewide and sells to landscapers during the off season.

While she depends on two young employees to maintain her farm, the former U.S. Forest Service tree geneticist and physiologist hopes her daughter will take over the business after she retires.

“I’m planning on getting to 100,” she said about any notion of retiring soon.

Despite their worries, the Gregorys and Songer say they still see the value in their work.

Trees grow faster in Florida than they do up north, and fresh-cut trees don’t dry out or lose their needles as quickly as those purchased from wholesale home improvement store lots, Songer said.

Ellen Casile Kostewicz’s family has bought a Christmas tree from BK Cedars every  Thanksgiving weekend for 20-plus years. The real estate agent remembers when her children’s heads barely reached the lowest branches. Now, they are eye level with the treetops.

Kostewicz, 54, said the family has planted a row of potted Christmas trees on their property off Millhopper Road in Gainesville.

“It’s just a blessing to have it to enjoy, but then give back to Mother Earth afterward,” she said.

Daphne Phillips, 56, of Lake Butler, visited Unicorn Hill last year after her son Matthew, 20, begged to get a live tree. Phillips said she had never been to a Christmas tree farm, but he has autism and loved the experience.

Particularly surprising was the lively competition among customers searching for the best tree.

“If you see the one that you want, go ahead and cut it down,” said Phillips, a stay-at-home mother and grandmother. “You come back, and it might not be there.”

Fred Sowder, 50, who lives near the Duckpond neighborhood in Gainesville, finally bought a tree from Unicorn Hill last year after continuously showing up after the trees were sold out.

An administrative assistant for the public defender’s office, Sowder chopped down a 6-foot tree with his wife and two children. He said he loves the smell of the needles.

While sad he can’t visit again this year, Sowder is empathetic toward Unicorn Hill’s situation.

“The way this year has gone, it’s understandable,” he said. “It’s been a year of disappointments.”

Ellen is a reporter for WUFT News who can be reached by calling 352-392-6397 or emailing news@wuft.org.
Previous COVID-19 Continues To Affect Florida Colleges And Universities
Next The Point, Nov. 30, 2020: A 2020 Success Story: The Rehousing Of Dignity Village’s Former Residents