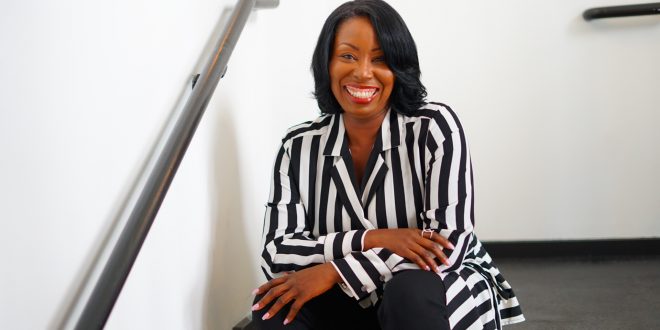 Virginia Grant began Gainesville’s Black Professionals five years ago as a way to bring together members of the community. She then launched SYNERGY magazine to showcase Black professionals' work in Gainesville. (Photo courtesy of Grant)

Virginia Grant yearned for a strong community when she moved to Gainesville after getting married. She sought it out at church. The greeters hugged and welcomed her, but she couldn’t talk to others during the service. By early afternoon, she was back at her house. She felt alone.

She enrolled in Leadership Gainesville, a program known for developing professional skills. She liked the program, but felt it wasn’t inclusive enough. She saw few others who looked like her. So, she took matters into her own hands and launched Gainesville’s Black Professionals. It was a way bring together the Black community.

Over 200 people attended Gainesville’s Black Professionals’ first Gala. That was five years ago. Since then, the organization has never hosted a mixer with fewer than 150 people.

That led to the birth of SYNERGY Magazine, which features Black entrepreneurs in industries from beauty to insurance and carries ads for Black-owned businesses. Grant wanted to show the youth in the city that they could be successful without leaving Gainesville. She also wanted college students to see the magazine and ask for shadowing and mentoring opportunities.

Anthony Pearce served as an ambassador for Gainesville’s Black Professionals and attended the event for SYNERGY’s first release. He remembered watching Grant as she stood on stage and prepared to greet those who were there to celebrate.

“To me, it was like this came together,” Pearce said, “She gave people a voice.”

“We are getting to be involved early on in the governmental process,” Grant said.

Grant said the Black professionals group as well as the magazine fill a big void. They give Black men and women a platform that she lacked when she was younger. Grant grew up in Weirsdale, a small town in Marion County. Chickens lived in the backyard, and tires rolled down dirt roads. Though Disney World was just down the road, she never visited. When she traveled, she stayed with family, not in hotels. And she used her few precious dollars to buy her dad knickknacks at the flea markets.

She continued to search for those individuals while she attended Florida A&M University. She earned a degree in psychology, the first in her family to make it to college. She went on to get a Master’s in mental health counseling at Nova Southeastern University.

But she never really used her degrees. She honed her marketing skills while working for a comedian in Ocala. The job exposed Grant to radio broadcasting, print ads and budgeting. She planned events and worked with non-profit organizations until she moved to Gainesville to support her husband’s career.

Grant’s marriage did not work out. But she was determined to succeed in her life through her marketing and planning skills. Her faith carried her as she made decisions about her career path.

Now 50, Grant serves as the executive director of Gainesville’s Black Professionals. She also works a full-time job as a marketing coordinator at Feathr: a digital marketing company that caters to events and associations. Grant raised her children and now helps take care of her grandchildren.

“I can change the perspective of Blacks in our community,” Grant said, “I did that by starting the magazine. I knew there was a void there, and I created a medium that exposes and shows the positivity of Black people in the community.”

Gainesville’s Black Professionals hosted a dinner where they invited the nominees for their Men of Vision and Purpose Award. Tarielle Jones worked with Grant to plan the event. Jones who has a Ph.D. in engineering, was still looking for a full-time job. She connected with two other professionals while at a dinner. They offered to send her to a conference for women in STEM held in Detroit, Michigan. One man got her into the conference, and the other paid for her hotel and food. The trip ended with three job offers. She came back to Gainesville only to pack her bags.

“They were very impressed by me and very willing to help me get where I needed to go,” Jones said, “It changed my life.”

Jones now works as an engineer at Raytheon Technologies.

Grant wants to remain in Gainesville, where she has built a space for herself and other Black Professionals. She hasn’t thought much about the future. She sees herself retiring someday and spending more time with her grandchildren. Grant can’t describe what her next five years will look like, but she plans to continue her involvement in the community she helped create.

Taylor is a reporter for WUFT News who can be reached by calling 352-392-6397 or emailing news@wuft.org.
Previous Florida Dentists Continue To Provide Care Amid Pandemic
Next ‘Almost Too Good To Believe’: Seven Months Later, 111 Of The 222 Former Residents Of The Dignity Village Tent Camp Have Been Rehoused