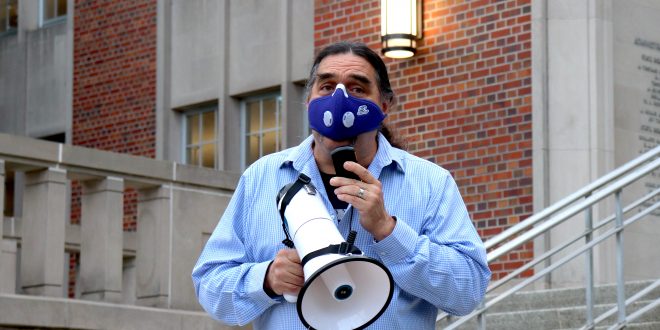 A small crowd applauded Fi Stewart-Taylor’s words on Thursday afternoon as she stood on the staircases leading to the University of Florida’s administration building.

Stewart-Taylor, a graduate assistant and member of the Graduate Assistants Union, joined with a handful of organizations to protest UF’s decision to have in-person classes in the spring.

“I love teaching. I can’t do it from six feet underground,” said Stewart-Taylor, 28. “I cannot teach if I am dead. We are not expendable.”

The protest held in front of Tigert Hall is among the string of complaints directed at UF’s administration. At the start of the month, the different organizations showed up in front of President Kent Fuchs’s house. Amy Abuqawod, 22, member of Gainesville’s Young Democratic Socialists of America, said the organizers invited Fuchs to address them. Fuchs did not.

Abuqawod, who donned a “Furlough Fuchs First” sticker on her jean jacket, said there were roughly 35 people at Thursday’s protest. Among the organizations that co-sponsored the event were Young Democratic Socialists of America, Graduate Assistant Union, United Faculty of Florida at the University of Florida, Socialist Alternative, Alachua County Labor Coalition, and UF’s chapter of the NAACP.

Each of the organizations’ representatives spoke on the steps of Tigert Hall, demanding action from UF’s administration. Much of the sentiments expressed called for UF’s transition to mostly online courses for the spring. Fuchs’ said in a statement earlier this semester that UF’s reasoning behind increasing face-to-face, in-person classes is to ensure full government funding to protect the employees’ jobs.

On Thursday afternoon, UF administrators wrote an email to employees that outlined its plans to offer nearly the same number of face-to-face classes for next semester as last spring but with a tight cap on class seats. UF dramatically decreased class sizes by 80% or more. The email also stated that students who did not want to have in-person classes or could not find a seat during registration were still given the option of online courses.

The email promised the university would provide KN95 and N95 masks to faculty and staff who will teach students face-to-face.

At the beginning of the protest, UFF-UF president Paul Ortiz, 56, informed the crowd that UF’s Vice President of Student Affairs had that afternoon announced that all students taking in-person classes would be required to get tested for COVID-19 every two weeks until the infection rate decreases. Ortiz explained that while mandatory COVID-19 tests were not what the organizations wanted, the regulations are a step in the right direction. He said it was thanks to the groups’ activism.

Abuqawod said she felt somewhat embarrassed as a UF student. She said the university had taken a stance that seemed to value profit over human lives.

“There is a lot of hypocrisy as well,” Abuqawod said. “They got 17,000 people in the stadium, and yet we can’t have graduation. What would be reasoning other than the football brings in a lot more money?”

Ayanni Cooper, 34, an English graduate student and teacher assistant, believes it’s important to speak out against these policies because lives could be on the line in certain classrooms.

“It feels kind of bullheaded to be spearing forward with opening back up again into a classroom situation that is not going to be beneficial to anybody,” Cooper said.

Abuqawod said the organizations plan to continue the protests until they feel heard by UF’s administration.

“Every single student who comes out and stands in solidarity means the world,” Stewart-Taylor said.

Melissa is a reporter for WUFT News who can be reached by calling 352-392-6397 or emailing news@wuft.org.
Previous The Point, Nov. 20, 2020: Florida Reports Over 9,000 Daily New Coronavirus Cases For Third Time This Week
Next Florida’s Sen. Rick Scott Has Coronavirus, ‘Very Mild Symptoms,’ Tells People To ‘Wear A Mask’