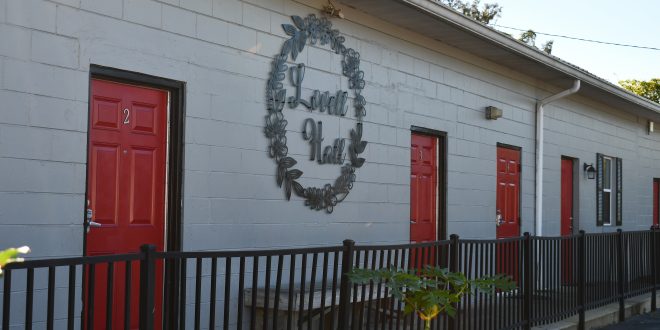 Lovell Hall is one of Interfaith Emergency Services’ temporary housing dorms for the homeless. Part of the new funding will be used to clean and update the buildings. (Hope Dean/WUFT News)

Patricia Marr sees more people on the streets these days.

Since COVID-19 began, she said the number of homeless people around her in Ocala “skyrocketed” — all evicted from their homes, losing their jobs, or just down on their luck. But she and others found a resource in Interfaith Emergency Services, a nonprofit organization and homeless shelter.

They have it all, Marr says — food, water, blankets, backpacks, sleeping bags, tents, medical care, showers, glasses masks, and more. It meant so much to her that she started to volunteer with the organization three weeks after she began using its services.

“There’s nothing really they don’t help you do,” Marr said. “If they don’t cover it, they know the name of people who do cover it.”

And Interfaith will soon receive an extra wave of funding for its efforts. The Marion County Board of Commissioners in September had approved a contract that gave $65,000 to IES. On Tuesday, the board added an extra $277,524 — over four times the original amount.

Interfaith will use the money to update its temporary shelters and help move more people to permanent residences. It will also fund extra rent assistance, said Carlos Tobon, chair of Interfaith’s board of directors.

Since COVID-19 began, Interfaith has started to assist people outside of its normal crowd of thousands. Families that used to be financially stable now are faced with pay cuts or a lost job and are flocking to the organization, Tobon said.

The extra people flooding in among the pandemic meant things had to change. One solution was a car drive, where cardboard boxes are loaded with items specific to each family’s needs and distributed outdoors.

Interfaith is normally funded through donations and grant applications, so this influx of money is unprecedented, Tobon said.

“It’s just been nothing but a blessing the way that God has shown himself,” Tobon said. “It’s humbling to see that there is so much trust from the county and in the community to see that Interfaith will do the right thing with the money.”

Since COVID-19 began, the usually difficult and time-consuming process of funding local nonprofits has become much easier, said Lisa Rice, director of the Ocala/Marion County Joint-Office on Homelessness. Money that was hard to come by before is now much more accessible due to the CARES Act.

“It’s been nice to have an influx of resources,” she said. “We got to look at our system and say ‘this is where the need is’ rather than going through this arduous process of opening up [grant] applications.”

And the need is still great. As of January 2020, over 500 homeless people have been counted in Marion County, said Miranda Broadbent, coordinator of Ocala’s homeless management information system. Over 150 are on the streets, but most of the county’s 243 emergency shelter beds are already taken.

Even as the funding increases, so do COVID-19 cases in Marion County. Positive cases among Florida residents in the county reached 95 reported on Monday, up from 53 reported on the prior Monday.

“In the past, we’ve had some situations where we got a whole [COVID-19 testing] data dump in from a private lab,” said Mark Lander, administrator for The Florida Department of Health in Marion County. “We’ve had nothing like that this week. There’s no reason why, other than we’re just having increased activity.”

Marr said she doesn’t worry too much, though. The shelter has masks and directions on where to get COVID-19 testing, and she hasn’t seen too many people around her get sick yet.

Hope is a reporter for WUFT News who can be reached by calling 352-392-6397 or emailing news@wuft.org.
Previous Controversial $30M Hyatt Development In Downtown Gainesville Moves Forward
Next The Point, Nov. 18, 2020: Alachua County Commission, School Board Have New Leaders

Food Banks And Pantries Facing High Demand Due To COVID-19

‘It Was On My Heart’: First-Time Local Author, Hairstylist Brings Hair Positivity To Elementary School Students

The reading series aims to forge connections between local leaders and students through bedtime stories.