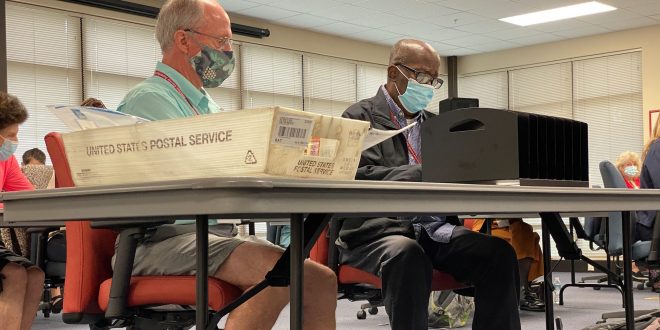 Mark Olson (left) and John Durr were among 40 volunteers who recounted more than 15,000 ballots Friday to decide the fate of the Alachua County growth management area amendment. (Christian Ortega/WUFT News)

The margin fell to just 265 votes, after volunteers manually recounted more than 16,000 ballots at the county supervisor of elections office in Gainesville, officials said.

In the general election, the growth management area amendment was narrowly approved by 64,327 voters, accounting for 50.07% of the total 128,692 tabulated that day.

That 175-margin led to a recount at the elections office all day Sunday through early Monday morning, when a total of 143,614 ballots were recounted using machine scanners.

The second recount was to have taken place Thursday, but was delayed a day because of Tropical Storm Eta.

Forty volunteers divided into pairs recounted 15,832 ballots between 9 a.m. to noon. Those were the ones the voting machines cast out on Election Day because someone didn’t fill them out properly. After lunch, canvassing board members spent the afternoon counting 377 duplicate ballots – those that had been faxed or mailed in but were damaged.

Proponents say the amendment was designed to prevent the county from overdevelopment, to protect the wetlands, forests and wildlife corridors. Municipalities could still expand and develop nearby unincorporated lands not protected by a growth management zone, and would still have enough room to grow before annexing those lands, proponents say.

Alachua City filed a lawsuit in September, contending that the amendment ballot title and summary were misleading, contained improper political rhetoric, and failed to adequately inform voters of its chief purposes. Archer, High Springs and Newberry soon signaled their agreement with the lawsuit, which was filed in the Eighth Judicial Circuit Court in Gainesville.

Gainesville Commissioner Adrian Hayes-Santos said this week that any court challenges to the amendment would be a waste of taxpayer money and oppose efforts to combat climate change.

“I think it’s important that we don’t have one big sprawled out city that covers every inch of our community,” Hayes-Santos said. “I think in the long run, this will be both an economic boon for our community by protecting these lands and the rural farmlands.”

Newberry Mayor Jordan Marlowe said the amendment is a declaration that his and other municipalities are incapable of controlling their growth responsibly.

“I think it’s an existential threat to our future,” Marlowe said. “Basically, the Alachua County Commission is saying that they and the city of Gainesville are going to control Alachua County.”

He added, “When you have every single city in your county asking you not to do something, when you have 50% of the electorate saying don’t do this, maybe it’s time to slow down.”

“I can’t imagine what middle ground we could reach,” Jones said.

Referring to the county commission, she added, “They are not currently managing their greenspace well at all, so I don’t know what makes them think they can manage ours any better. … Those of us in the surrounding communities don’t have very much of a voice. And that’s what’s frustrating.”

Christian is a reporter for WUFT News who can be reached by calling 352-392-6397 or emailing news@wuft.org.
Previous The Lede || Season II Episode XVI: Beating the Odds and Coming Together
Next 10,000 New Coronavirus Cases In Florida Added In One Day