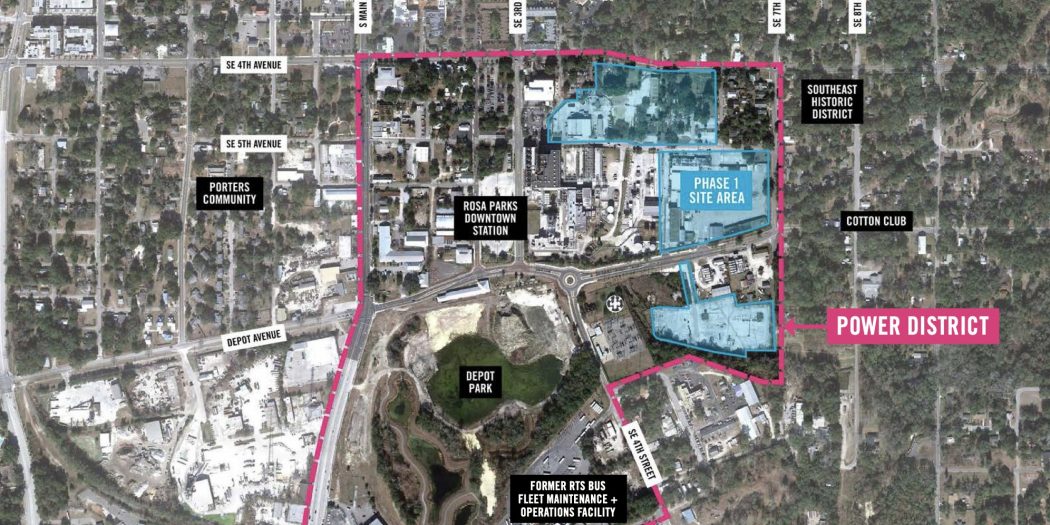 The areas that the GCRA hopes to rework take up the area between downtown and Depot Park. Many buildings are GRU facilities and warehouses. (Courtesy of GCRA)

This story is part of Untold Florida: Your Neighborhood, Your Story, a WUFT News series built from your questions. John from Gainesville asked us about the status of the Power District development that he thinks could be incorporated with the Sweetwater Branch and or Depot Park properties.

The city of Gainesville recently hired Colliers International to put forth a plan for the development of the Power District, as well as many other city sites, by January 2021.

The city brought on Colliers International to work with the Gainesville Community Reinvestment Area after developmental rights issues arose with prior partner Cross Street Partners.

“We couldn’t award to that developer because near the end of our negotiations that company changed,” GCRA Director Sarah Vidal said.

The project could still take “many years to complete,” she said.

Now, it may finally be falling into the next phases. The partnership with Colliers International would include a plan for the Power District project that encompasses redevelopments of active and inactive GRU facilities in the areas between downtown and Depot Park. According to the GCRA, relocation of GRU facilities would cost $6.25 million.

“This next step is really working out a strategy of how to move it forward from a real estate perspective,” Vidal said.

“The Power District . . . has got transformative opportunity for this city,” he said. “By the end of the year, we will bring to you an overall strategic plan.”

Colliers International has offices in 68 countries and owns 2 billion square feet of real estate. Krasnow sees this large footprint as one strength that the company can bring to places like the Power District.

The district, which originally started as a 17-acre area of land, was expanded to encompass over 27 acres in 2019.

Affordable housing was an important aspect to include in the developments for Commissioner Harvey Ward.

“We have assets, as a community, that are sitting there that need to become housing,” he said at a recent city commission meeting. “I don’t want us to sit on that stuff. People need housing.”

Commissioner Gigi Simmons also had her share of concerns about the project’s cost and timeframe.

“These are things that we’ve been talking about for the last five to ten years, easily,” she said. “I don’t know how much money we have spent in the Power District alone.”

“One of the things about our relationship with Colliers is they only get compensated when there are results,” City Manager Lee Feldman said.

Mayor Lauren Poe is confident that partnering with Colliers International will mean some much-needed progress for the project.

“It doesn’t happen quickly,” he said. “We need that outside private support to get some of these things moving forward.”

It is unclear what the impact may be on the community and the environment due to the timeframe, according to Vidal.

“We are so far away from getting to construction, so we don’t know what the impact will be until we know what the project is going to be,” she said.

Colliers International plans to present a strategic plan back to the city commission in January.

“As I understand, we’ll be meeting with them and coming up with a strategy for moving the Power District forward by January,” Vidal said.

Correction: A previous version of this story said the GCRA hired Colliers International. It has been corrected to say the city of Gainesville did the hiring. It also said the GCRA hoped to have plans finalized by January. It has been corrected to say Colliers International will present their plan to the city commission in January.

Rhianna is a reporter for WUFT News who can be reached by calling 352-392-6397 or emailing news@wuft.org.
Previous Nov. 10, 2020: Morning News In 90
Next Eta Likely To Stay Over The Gulf This Week, Track Shifts West