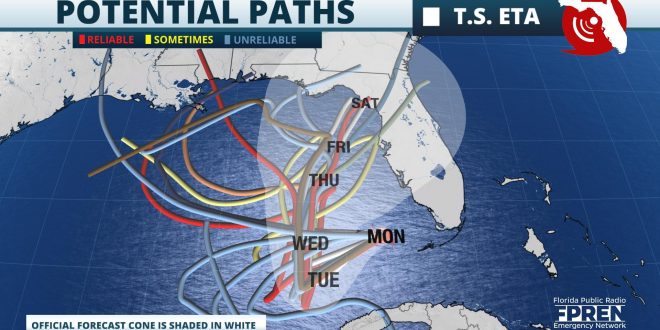 Tropical Storm Eta has moved into the Gulf of Mexico, where competing atmospheric factors are leading to low confidence on its next move. As such, a credible forecast on when, where, and even if a second landfall will occur in Florida cannot be made at this time.

The season’s 29th tropical storm became the 12th storm to make a U.S. landfall as it crossed the Upper Florida Keys late Sunday evening. As of Monday morning, Tropical Storm Eta was marching west-southwest into the southeastern Gulf of Mexico and had maximum sustained winds up to 60 mph. Model simulations are in relatively good agreement that this motion will continue with Eta over the next 24 hours, sending it a few hundred miles offshore from Southwest Florida by late Tuesday. What Eta does next is highly uncertain. In their 4 am EST update Monday morning, forecasters at the National Hurricane Center said there will likely be “large changes” to the long range forecast track of Eta. The storm is sandwiched between two ridges of higher pressure over the western Gulf of Mexico and east of Florida, which is likely to cause Eta to slow down considerably by midweek. A trough of lower pressure in the southwestern United States is forecast to erode the ridge in the western Gulf enough to cause Eta to move slowly north Wednesday into Thursday. However, computer models do not agree whether the trough will extend far enough south to completely pick up Eta. Another trough off the Pacific Northwest coast is expected to move into the central U.S. on Friday. It is also unclear whether this second trough will extend far enough south to steer the tropical storm. Small changes in any of these potential steering mechanisms will have a large impact on the eventual track of Eta.

Regardless of what happens with Tropical Storm Eta in the coming days, the short-term flood risk continues in parts of South Florida. Official observing sites and radar estimations suggest more than a foot of rain has fallen in portions of Miami-Dade and Broward counties over the past two days. Numerous reports of flash flooding had been received by local officials in and around the communities of Miami Lakes, Pembroke Pines, Davie and Fort Lauderdale.

Even though TS #Eta is moving away from #SoFla, the dangers of flooding remain. Two-day estimates are over a foot in many areas; warnings continue through midday. #flwx Latest advisory >> https://t.co/t6Cwvxe1Nh pic.twitter.com/TzazLRUVfw— Florida Storms (@FloridaStorms) November 9, 2020

Outer rain bands from Tropical Storm Eta are still likely to affect the warned areas through Monday afternoon, although the steadier and heavier rain from Eta is forecast to shift into Southwest Florida. An isolated tornado or water spout also remains possible through Monday evening where stronger cells may induce low-level spin. Periodic downpours are expected farther north as well, across much of central Florida through the day Tuesday, thanks in large part to the broad counter-clockwise circulation around Eta pulling in moisture from the Atlantic.

Saltwater flooding from high seas and rough surf is also likely to continue in the Florida Keys, along the shores of the Florida Bay and Biscayne Bay through early Tuesday, especially at times of high tide. Minor coastal flooding will also continue to be possible up and down the Atlantic Coast from the persistent onshore flow through at least Tuesday. Elsewhere across Florida, relatively quiet weather should ensue through midweek while Tropical Storm Eta remains well offshore.

With the forecast track of Tropical Storm Eta highly uncertain, it is still too soon to project potential impacts to locations farther north, such as along the Nature Coast or in Florida’s Big Bend. However, residents in these areas are encouraged to stay vigilant and be prepared to act quickly since there might be little notice of potential impacts from Eta given it’s close proximity to land later this week.

Ray is a meteorologist for the Florida Public Radio Emergency Network (FPREN).
Previous The Point, Nov. 9, 2020: The Story Of Chris Nikic, Ironman Triathlete
Next Nov. 9, 2020: Morning News In 90

Eta Likely To Stay Over The Gulf This Week, Track Shifts West