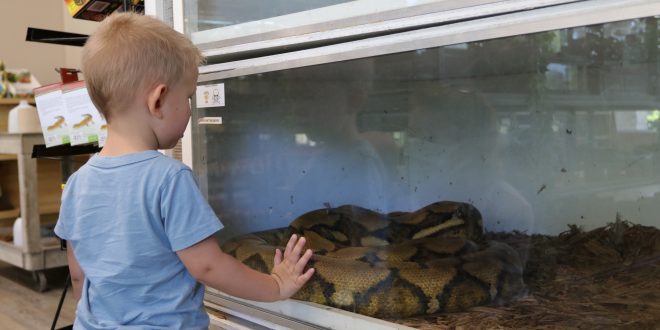 Salvio Rabell, 2, stands mesmerized by a sun tiger reticulated python at Gator City Reptiles. Linda Rabell brought her grandchildren, Salvio and 6-month-old Delia, to the shop as a fun outing since zoos are still closed from the pandemic. “Most pet store owners are so friendly, so it’s just a great way for the kids to get a chance to see things.” (Marlowe Starling/WUFT News)

Kayla Young loves reptiles, but she might love the look they put on children’s faces even more.

First fear, then curiosity. Surprise when they discover snakes aren’t slimy, like they thought. Best of all, Young said, is when a child touches a reptile’s smooth, scaly armor for the first time. A beast akin to a dinosaur becomes a marvel.

“Their eyes light up,” Young said. “Educating children is what’s going to drive the future in changing people’s perspective on reptiles.”

She was fascinated by reptiles as a kid. Catching anole lizards in her backyard – and wearing them as earrings – was a regular pastime. Her husband was the same way.

The couple owns NKS Reptiles in Jacksonville, which has 28 species of reptiles and amphibians from tree frogs to tegu lizards and Burmese pythons. Like other reptile keepers in Florida, Young said educating the public about reptiles and why some people shouldn’t own them as pets is a key part of their work.

Now, the Florida Fish and Wildlife Conservation Commission is proposing tighter regulations on invasive reptiles. Reptile breeders, exhibitors and shop owners said the proposals threaten the nature of their business, including public education about species. A vote is expected in December.

The proposals would place on the prohibited species list all species of tegus, a type of large lizard, and green iguanas. That means no one in Florida would be allowed to own, sell or breed them except for limited licensees, such as zoos.

They also would prohibit invasive reptiles currently listed as conditional species, from rules passed in 2008. Some of these are rampant in Florida – including the notorious Burmese python, a proliferating predator in Everglades National Park.

Others, like the reticulated python, haven’t established populations in Florida’s wild.

The commission said the rules would limit the release and potential establishment of invasive reptiles. In a report evaluating estimated costs of the rules, the agency cited the ecological impacts of iguanas, tegus and Nile monitors: disturbing nesting sites, destroying seawalls, preying on native species and consuming or disturbing gopher tortoises, a state-designated threatened species.

The move would eliminate listed snakes and lizards from the conditional species list, which the reptile industry said has been successful. Over a decade, there have been 35 documented citations for conditional species violations and 142 warnings, according to commission data.

The industry said a blanket ban on such species isn’t fair to those who have followed the state’s rules for the past decade.

People who trade in reptiles disagree with lumping nine species into the same prohibited category.

“The approach to dealing with the wild population of iguanas and tegus, especially here in Florida, and Burmese pythons, should be a completely separate item from the regulation or banning of commercial industries,” said Michael Cole, secretary for the U.S. Association of Reptile Keepers Florida, a nonprofit group that advocates for private ownership and sales of reptiles and amphibians.

They said it could worsen Florida’s problem with invasive reptiles by limiting public education and encouraging some owners to release animals to avoid penalties.

“There kind of has to be a mass, concentrated release of a species in order for it to become established,” said Phil Goss, president of the national U.S. Association of Reptile Keepers. “Unfortunately, there are random escapes or releases of pets, but those aren’t going to establish colonies or invasive breeding populations.”

Florida has the highest number of invasive species in the country, said Coleman Sheehy, a herpetologist and collection manager for the Florida Museum of Natural History.

He said it’s hard to predict whether other species would proliferate in the wild as extensively as Burmese pythons in the Everglades, but it could be a good indicator of the environmental risk exotic reptiles pose.

“The potential is there,” Sheehy said. “That is the risk, that’s the fear, that’s the worst case scenario.”

“In the ’70s or ’80s, we didn’t think about the ecological consequences of our actions,” Cole said. “That’s why education is so very important.”

Anyone who owns, breeds or sells a conditional species in Florida requires a Class III permit issued by the commission. They are subject to regular inspections to make sure they follow rules about cages and other requirements.

The new rules would also require reptile keepers to sell or exhibit species in a public facility, forcing people who conduct business out of their homes to rent a shop. For people like Cyliss Harrington, the self-proclaimed Ybor Snakeman, that would be devastating.

“If I’m not allowed to do that (transport the reptiles for exhibition), that completely kills my business,” Harrington said during a virtual public workshop earlier this month. “This isn’t just a hobby for me. This is my life. This is what I do.”

Young estimated the cost of renting a public storefront, rather than operating out of their home, at $6,000 a month, with an estimated loss of $40,000 a year from not being able to take the animals to educational events, such as children’s birthday parties or schools. NKS Reptiles does not sell its conditional species outside Florida.

Based on data for 2019, the commission estimates that the financial impact to the industry from the loss of conditional species sales would range from about $100,000 to nearly $600,000 combined for Florida’s 232 license holders.

“The environmental, social and economic impacts to Florida and its citizens outweighs the limited impacts to small businesses,” the agency concluded.

For other stakeholders, the implications of these proposals go beyond what’s laid out in writing. Pet owners like Ty Davis said the personal bonds they form with pet snakes and lizards are no different than with dogs or cats.

“You don’t want to lose these things,” Davis said. “Most of the snakes I’ve had, I’ve had since they were hatchlings. It’s tantamount to someone losing their child.”

Jenifer Solida, owner of Valhalla Reptile Sanctuary in Ocala, asked the commission to loosen its proposed regulations. She said it’s common for people to find a baby iguana and keep it in a fish tank, unaware that it demands intensive care. She receives orphaned iguanas during the breeding season.

“There’s really not enough education out there to prepare people for this,” she said.

Marlowe is a reporter for WUFT News who can be reached by calling 352-392-6397 or emailing news@wuft.org.
Previous Marion County Real Estate Is Booming. Here Are The Factors Driving It
Next Close Vote On County Growth Management Area Amendment Leaves Lawsuit Against Alachua County In Question