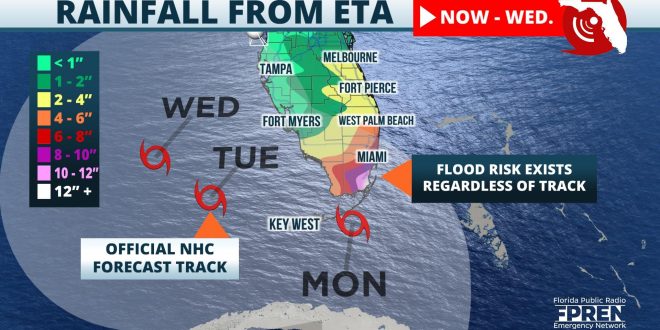 Days of occasional heavy rainfall may increase the risk of flooding over-saturated South Florida late this upcoming weekend into early next week ahead of what is likely to be Tropical Storm Eta in the Caribbean.

Eta weakened to a depression over Central America, but it has moved back over the warm water of the Caribbean Friday morning. Atmospheric conditions make re-strengthening into a tropical storm a good possibility later Friday or Saturday.

The latest Hurricane Center forecast track takes the center of the Eta near or over Cuba on Sunday, but heavy rain is expected to arrive well in advance of Eta. Persistent easterly winds will likely cause showers to affect South Florida Friday and the rain is forecast to increase in aerial coverage and intensity as the influence from Eta increases, especially Saturday evening into Sunday.

Nov 6 @ 345am – One of the greatest potential impacts from #Eta is heavy rainfall. This risk is greatest for the east coast metro areas where a Flood Watch is in effect through Tuesday evening. #flwx pic.twitter.com/z5HevJXNDS— NWS Miami (@NWSMiami) November 6, 2020

The forecast path of Eta is more uncertain than usual which will alter rainfall amounts, but 6 to 10 inches of rain is possible in Southeast Florida starting Friday and lasting through mid-next week. Rainfall amounts of 3 to 6 inches are possible as far north as the Space and Treasure coasts and extending westward through the Florida Heartland into Southwest Florida. Over the past 30 days, data from rain gauges and radar indicate parts of Miami-Dade, Broward, and Palm Beach counties have experienced 200 to 300 percent of their average rainfall. Meanwhile, the Treasure Coast has had about 150% of its average during that time. Flooding is possible anywhere over South Florida, but these areas are particularly vulnerable because of the wet conditions so far this fall season.

It doesn’t take much to flood metro areas of Southeast Florida. They’ve had 200-300% of their average rainfall in the past 30 days. Even if amounts end up on the lower end of what’s likely, some flooding is a strong possibility. #FLwx pic.twitter.com/9e94BkCVbE— Ray Hawthorne (@ray_hawthorne) November 6, 2020

Eta’s effects are likely to last well into next week. The forecast cone brings the center of the storm into the Gulf of Mexico or near southwest Florida on Monday and Tuesday. Regardless of the exact track, periods of heavy rain and flash flooding are a possibility over much of the state, but it is difficult to say exactly where conditions may be the worst. Forecasters encourage everyone in Florida to continue to carefully monitor the forecast for changes because of the low predictability of Eta and its potential impacts across different parts of the state.

North central Florida has four shelters – two in Gainesville, one in Lake City and one in Ocala  – providing hot meals, beds and clothing to residents seeking refuge during this chilly season.