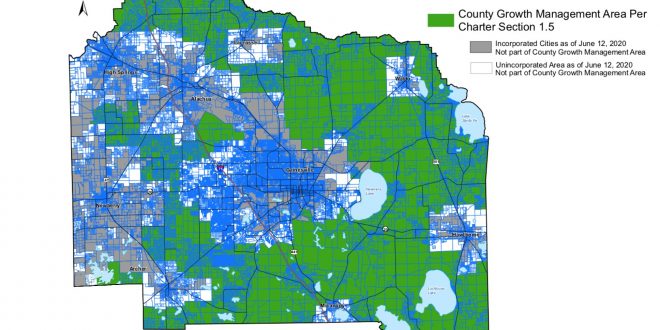 A highly contested amendment on Alachua County’s 2020 general election ballot is currently on hold, as is the lawsuit it spurred before Election Day.

In the weeks leading up to Nov. 3, city officials in Alachua, Newberry, High Springs and Archer argued over the proposed County Charter Amendment, which would establish a County Growth Management Area and grant the county jurisdiction over new land developments.

City commissioners in those four municipalities decried the amendment as an infringement on property rights. They also said the proposal was misleading to voters and did not give the public a true understanding of the repercussions the city would face as a result of the amendment’s passing.

Alachua first issued a statement challenging the county, claiming that the proposal contained “improper political rhetoric and fail(ed) to adequately inform the voters of the chief purposes and material components of the proposed Charter Amendment.”

Cities like Newberry, High Springs and Archer followed and declared their support of Alachua’s stance.

Still, it was a very late challenge. The amendment still appeared on the ballot.

That narrow margin means the votes will be recounted on Sunday.

Now, the lawsuit proceedings are still in question. If the vote total holds after the recount and cities decide to move forward, it will be up to a judge to decide the legitimacy of the suit.

Amendment opponents also seized on the narrow margin as further reason to pursue the lawsuit.

“In the end — because it’s so close — that adds a lot of fuel to the argument from the cities about the vagueness,” Newberry City Commissioner Tim Marden said.

Marden said the unclear wording on the ballot and voter’s lack of understanding on the issue determined the outcome of a vote that he believes will have a negative impact on the city.

While the county website provided maps and guides to help elucidate the issue to voters, that information couldn’t be presented on the ballot and many voters don’t research the amendments ahead of voting, he said.

Melanie Wells, an Archer city commissioner, said she had hoped to see a better turnout against the county amendment. Now, she’s holding out hope that if the amendment does pass, the court would understand where the city governments are coming from.

“I believe our city and others would benefit from not having this amendment,” Wells wrote in an email. “If the amendment passes, I believe that the municipalities will miss out in having a say in land that is in their city limits.”

But proponents of the County Growth Management Area remain committed to its passage.

At a Gainesville City Commission meeting in September, commissioners made a 6-0 vote in symbolic support of the County Growth Management Area.

“I think that’s what this Growth Management Area did,” Hayes-Santos said. “It gave the municipalities enough room to grow, but also enough room for keeping sensitive lands and rural farmlands out of development.”

Hayes-Santos said that while he can’t speak on behalf of the cities pushing to sue, he sees their efforts as a waste of taxpayer dollars.

“The amendment is lawful and constitutional and has been reviewed by attorneys,” Hayes-Santos said. “I think it’s sad. They’re gonna be wasting taxpayer dollars and all these cities on a fruitless lawsuit.”

While the lawsuit’s main stance is the misleading nature of the amendment’s wording, Hayes-Santos said he thinks the close vote was not due to lack of clarity. Instead, he believes voters simply had contrasting ideologies, he said.

“Some people supported it and some people didn’t support it,” Hayes-Santos said. “I think that’s why you saw a difference. I think people actually did understand it and that’s why it was probably closer.”

“A lot of people don’t know about the amendments,” Jones said. “They look at it and they check ‘Yes’ or ‘No’ because they really haven’t done the research.”

Jones said she also sees the impact the amendment would have on Gainesville as significantly different from the effect it would have on smaller cities like High Springs and Newberry.

As a big city, she said, Gainesville has a strong partnership with county officials, granting it greater influence. The city has also allowed an excess of developments across the city from her vantage point, leaving little room for the Growth Management Area amendment to take its toll.

For the rest of them, the stakes are higher, she said.

“We lose autonomy,” Jones said. “We will then have to answer to the board for any land that we annex. We think we are better able to control our green space, so it’s kind of like having a big brother going over your shoulder. It’s just frustrating.”

Ahead of Sunday’s recount, with the lawsuit hanging in the balance, Jones said the cities’ use of taxpayer dollars has been carefully evaluated along with the city attorney. The cities, she said, remain prepared to support one another if needed.

“We’ll just see how it goes,” Jones said. “We’re prepared to follow up. We’re just kind of waiting on the sidelines to see what we can do or if we need to do anything.”

Nicole is a reporter for WUFT News who can be reached by calling 352-392-6397 or emailing news@wuft.org.
Previous New Florida Rules Would Tighten Restrictions On Invasive Reptiles
Next On Election Day, Democracy Rested In His Hands