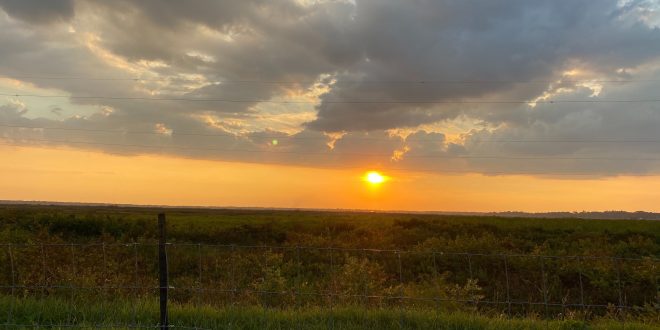 Paynes Prairie at sunset just south of Gainesville. It's one of the state's ecosystems that could be threatened by climate change and, in fact, changed dramatically as a result of Hurricane Irma flooding in 2017. The storm was one of the state's most powerful storms on record in recent decades. (Amalie Bethune/WUFT News)

Climate Change Resource From UF IFAS Focuses On The Facts

If you search for the term “climate change” online, the results can seem overwhelming and will range from presidential debates on the topic to opinion pieces on blogs. The public may seem to be divided on the issue and what it means.

For those looking to find factual information that avoids political controversy, the University of Florida Institute of Food and Agricultural Sciences (IFAS) has published a FAQ on Climate Change and Florida to shed some light on the issue, particularly how it relates to citizens of the state.

The document contains answers to basic questions about climate change and information about how it is impacting Florida residents. Joshua Papacek, one of the authors of the FAQ, explained that the purpose for publishing the document was to provide reliable information on climate change and help Floridians understand how close to home this issue is.

“There’s a lot of people that want to take action and want to know what they can do and maybe still have some questions about the science behind climate change. So, we wanted to fill that need specifically at the local level,” said Papacek.

According to the FAQ, many common occurrences in Florida are linked to climate change. Increases in the numbers of natural disasters like hurricanes and tornadoes and “sunny day” flooding are just a few examples of how climate change is already impacting everyday life.

The FAQ also mentions that climate change is likely to affect the value of homes in Florida because of increased risk of extreme weather events like hurricanes and tornadoes.

The New York Times reported that prices of homes have been dropping in places that are most susceptible to the effects of rising sea levels. Homes in coastal areas also face rising insurance costs.

According to the Times, home prices in Bal Harbour, a town in Miami Beach, have dropped 7.6 percent from 2016 to 2020 according to data from Zillow. This coincides with the many other low-lying areas that are near the ocean and have seen a drop in sales and home prices in recent years. This pattern is predicted to continue as sea levels rise.

Home price drops demonstrate that climate change not only affects the ecosystem but also the economy. Market fluctuations are a sign of how quickly the impact of climate change is being felt in Florida.

The document also covers the government’s role in addressing climate change. The government has the power to create legislation that can reduce carbon emissions and ensure protections to reduce the impact of climate change on Florida’s residents.

Under Gov. Rick Scott, state officials were banned from using the term climate change. According to a Florida Center for Investigative Reporting article published in 2015, officials at the Florida Department of Environmental Protection were ordered not to use the terms “climate change” and “global warming” in any official communications because it was “not a true fact.”

A press secretary for the department at the time said that there was no official policy on the topic, but declined to answer other questions. Despite no official policy, it was well-known by state employees, the center reported.

IFAS is an organization that is part of the university’s land-grant mission and provides research and development for Florida’s agricultural, natural resource, and food industries.

Papacek said IFAS wanted to avoid the political conversations around climate change. The FAQ was meant to focus on the facts and the science behind climate change and steer clear of opinions.

In the document’s final section, the authors address how to have conversations with people who may disagree with climate science, Papacek said.

The words climate change can appear vague or political, but the IFAS FAQ aims to show that this is an important issue facing Floridians. Informing the public by providing reliable, factual information was the primary goal of publishing the document.

“People need to be talking about climate change more,” Papacek said. “Those are the types of conversations that really help to change opinions or get people motivated to do something. Regardless of who is in whatever political office, you can help make a difference just by having those conversations. It’s really all about shared values.”