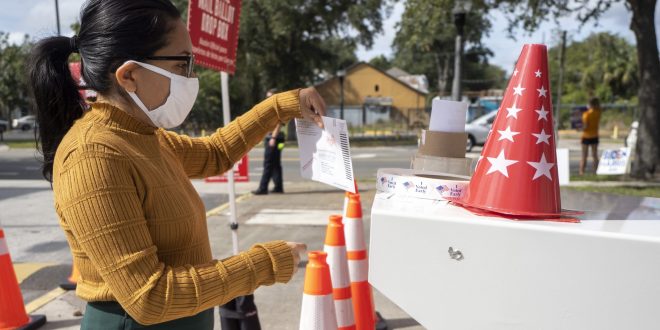 Kelly Castro, 27, an administrative assistant for the Alachua County Chamber of Commerce, casts her mail-in-ballot at the Alachua County Supervisor of Elections building on Wednesday, Oct. 28, 2020. If ballot envelopes are unsigned, officials cannot accept and count them. (Emily Felts/Fresh Take Florida)

Yes, It Is True: Florida Ran A Smooth Election

In the nationwide madness surrounding Election Day and ballot counting in numerous states, it would be easy to overlook a rather amazing fact given Florida’s elections history: It isn’t part of the chaos.

The state made world infamous by the 2000 recount fiasco, the state that two years ago had a gubernatorial and Senate recount marred by equipment failure in a major county, the state that regularly had counties take days to get a 100% vote count ran a near-perfect election Tuesday. Flori-duh became Flori-rah, at least for a day.

“As you see chaos unfolding in some of these other battleground states, the people are actually looking at Florida and asking the question, ‘Why can’t these states be more like Florida?” said Gov. Ron DeSantis, a Republican and close ally of Trump.

Biden’s Florida spokeswoman, Jackie McGuinness, agreed that the state ran its election well, even if her side did not like the outcome.

“Reports that there are problems or fraud pop up every four years but don’t prove to be true,” she said. “Florida’s count has integrity. We have faith in the system.”

A big advantage Florida had over states like Pennsylvania, where a third of the vote remained uncounted Wednesday afternoon, is that it allows early and mail-in ballots to be tabulated starting three weeks before Election Day. Pennsylvania had to wait until Tuesday before it began counting its mail-in votes.

That would have been a problem in Florida, where this year 9 million of the 11 million votes were cast early.

“It is hard to understand how other states do not allow their administrators to begin processing ballots before the polls close,” said Bill Cowles, who has been elections supervisor in Orange County since 1996. He lived through the 2000 recount between George W. Bush and Al Gore that resulted in Bush winning the state by 537 votes and the White House after five weeks of court battles and county-by-county fighting over ballots.

Liza McClenaghan, chair of Common Cause Florida, which tracks voter problems, said the state did well, but “no election is perfect.” She said some voters were wrongly denied provisional ballots and the state made it difficult for voters to confirm their registration online. Some counties did not allow voters to check if their mail-in ballot had been counted. Some Election Day polling places got moved at the last minute, but the changes were not reflected on websites.

She said some candidate supporters used bullhorns, truck caravans and loud music to disrupt early voting sites, which some voters would consider intimidation.

All reported problems Tuesday were minor. One county elections supervisor’s office lost its internet connection, delaying its count by a couple hours. A few counties had computer glitches that were quickly resolved. A polling place in suburban Orlando was briefly shut down because of a police SWAT raid down the street.

Florida’s push to get more voters to cast ballots early or by mail meant lines on Election Day were short. And even among a widely split electorate where emotions ran high, there were no reports of violence at early or Election Day polling sites.

“Thank you Florida for being an example … of voters of diverse political views with differing hopes for the outcome of (Tuesday’s) election who nonetheless supported and respected one another’s right to participate in our democracy,” said Florida Secretary of State Laurel Lee, who oversees the election system.

So how did Florida go from laughingstock to an Election Day star?

First, it unified its voting process. In 2000, some counties used the infamous punch card ballots with their hanging, dimpled and punctured chads. Those are now in history’s dustbin. Other counties used old-fashioned lever machines, while some used paper ballots where voters fill-in bubbles like on a school exam, with those tabulated by machine.

After an aborted attempt at using touchscreen computers in the mid-2000s, which left no paper trail, the state mandated paper ballots with machine counting more than a decade ago.

The state also adopted early voting and voters no longer have to say they are sick or out-of-town to request a mail-in ballot – with the coronavirus pandemic making some people leery of standing in line or into public buildings, that gave them an easy avenue to vote.

Hillsborough County Elections Supervisor Craig Latimer, president of the state supervisors association, said he has been telling everyone for weeks that Florida would have a well-run election. He believes that will be true for years to come.

“It is really critical, especially right now, for citizens to have confidence in the elections system,” he said.

The Associated Press is a wire service to which WUFT News subscribes.
Previous Florida Supreme Court Hears Darnell’s Case That Could Affect Sheriffs’ Budgets Statewide
Next Marion County School Board Terminates Administrator For Medical Marijuana Use