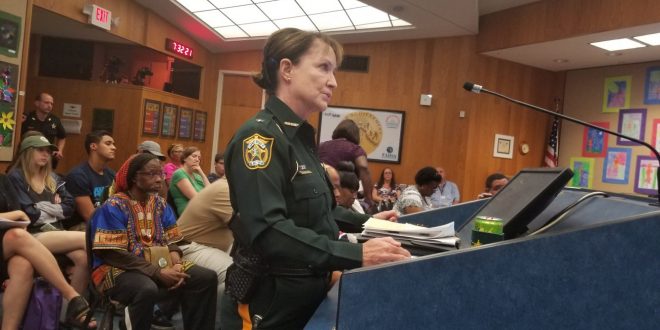 Outgoing Alachua County Sheriff Sadie Darnell's dispute with the Alachua County Commission escalated over the past few years to the point of oral arguments before the Supreme Court on Wednesday. (File photo/WUFT News)

The attorney for a Florida sheriff argued before the Supreme Court on Wednesday that sheriffs should have broad discretion over county budgets in a case that could affect oversight by civilian politicians of spending on jails and law enforcement across the state.

The case stems from a 2017 lawsuit filed by Alachua County commissioners against recently defeated Sheriff Sadie Darnell, who until her failed re-election earlier this year was Florida’s only female sheriff. Darnell and commissioners disagreed over whether she could spend money for goods and services after the county had already approved spending the same amounts of money in the budget on other items.

The decision is expected to have wide-ranging effects over the authority of sheriffs across Florida to reallocate their funding.

Two lower courts had previously ruled in the sheriff’s favor. The county appealed to the Florida Supreme Court.

“They are first responders,” said the sheriff’s attorney, Cynthia Weygant. “Unlike other areas of the government, sheriffs’ needs can change in an instance, like if there is a natural disaster.”

Chief Justice Charles T. Canady appeared unimpressed with that argument, calling it “fallacious” because other government agencies have changing needs as well – including, he said, the Florida Supreme Court.

“As someone who is responsible for the judicial branch, we face changing needs all the time because of unexpected circumstances,” Canady said.

Under Florida law, sheriffs must “prepare and submit to the board of county commissioners a proposed budget” for the next fiscal year, which begins on Oct. 1 and ends on Sep. 30. The proposed budget must include estimated expenses to operate and equip the sheriff’s office and jail.

In court, an attorney representing the county commission, James Parker-Flynn, said the law does not allow the sheriff to change the amounts she intends to spend after approval by the county. He said if the sheriff can reallocate money, then transparency would be lost.

Weygant, the sheriff’s lawyer, said sheriffs are elected constitutional officers, and their independence from county interference is protected by law. She said county commissioners would be told how sheriffs spent money because sheriffs submit detailed, annual financial reports.

“Why even bother having this process, a budget and specific appropriations for these things if the sheriff can just move things around with the amount of discretion that you are arguing for?” Muñiz asked.

The sheriff’s office is funded through taxes on county residents, Weygant said, and voters can elect a new sheriff if they were unhappy about spending.

“They certainly have the right to make their displeasure known at the ballot box,” Weygant said.

Justice John Couriel said that argument ignores Florida laws outlining how local governments approve annual county budgets. “You are saying the county should just ignore this carefully laid out statutory process,” he said. “‘Hey, if the people are not happy, they will just vote her out.’”

Ironically, Darnell was voted out in August. She lost the Democratic primary to Clovis Watson Jr., a former state lawmaker. There was no Republican opponent in Tuesday night’s general election.

Nomfumo is a reporter for WUFT News who can be reached by calling 352-392-6397 or emailing news@wuft.org.
Previous Buchholz To Receive Athletic Facility Funding Amid Tensions Over Elections, Equity And Health
Next Yes, It Is True: Florida Ran A Smooth Election

Some victims and families impacted by the Marjorie Stoneman Douglas massacre have reached a $25 million settlement with the school district.