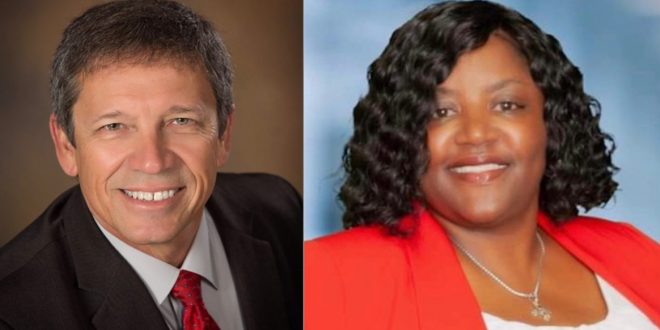 Here’s what voters should know about each.

Brown has 22 years of experience working for the Putnam County School District, and she was hired as the first graduation coach for the district. She also served as a middle school guidance counselor for 10 years.

Through her role as a guidance counselor, Brown developed many relationships with stakeholders and community members within the county, and she believes this role helped her tremendously.

She considers herself a caring, empathetic person, and this attitude is shared towards students. She mentioned that she still has strong relationships with past students she counseled.

Within her role as graduation coordinator, Brown knew that the district had to make a big impact to make a difference.

The district developed an early warning system to pinpoint what the students needed, she said. In addition, a year after this program was in place, Jobs for Florida’s Graduates, was started as a grant from the Florida Endowment Foundation.

The grant was used at eight sites, and each school received $45,000, she said. These grants benefit the students that are considered at-risk for graduating. It is a school to career program that includes skills needed post-graduation, she said.

“I think that when we offer students opportunities to learn things about post-secondary readiness, to be ready after they graduate, they tend to stay in school, graduate on time, and then have a better future that way,” Brown said.

She says she will continue to use these strategies, if elected, and also focus on Bright Futures’ students.

She explained that she believes that mentoring students can also aid in their success.

“I mentor a lot, and I believe that our students should be mentored so that they can have another adult in their life who is encouraging them to do their very best,” she said.

Brown supports diversity training for employees. Through this training, Brown said that they will connect with their students better.

If elected, Brown said she will be transparent with her peers.

“We won’t always agree, but I will always listen,” she said. “Being a person that will respond to those individuals and not just overlook what is going on with them will set me apart.”

Surrency has served the district for four years. During this time, the graduation rate increased from 54.9% in 2015 to a projected rate of 90% for 2020, the highest increase in the state for the same duration.

The pandemic did not hinder the students’ performance. Surrency said that he believes the success of these students is ongoing because of the programs he has installed for them.

One of these programs includes the five-part graduation initiative that involved looking at warning signs starting from elementary school to high school. Surrency said that the district focused on looking at attendance, discipline, and other factors that placed these students at risk for not graduating.

“I think that made a big difference… I think that’s been the key, but it’s been a community and statewide effort, but we’ve really partnered with a lot of community members to make sure this is something that will help attract more businesses to our county,” he said.

Surrency believes the work has paid off.

“We have more businesses starting and more people being hired, so I think it’s really created an upswing here in Putnam County,” he said.

Surrency said that Putnam County has improved its reputation in the state.

If reelected, Surrency would like to revamp aging facilities for students and create modernized facilities, he said.

In addition, he wants to add a cybersecurity academy for the future for STEM development. The district has added drones and robotics for STEM.

“Students could have some really high tech, high skilled jobs that will pay them very well, because those are some jobs, you know, for the future that will be readily available,” he said.

2020 marks Surrency’s 42nd year in education, and 27 of them have been in school or district leadership.

Surrency believes that he has the means to serve again as superintendent based on this experience and the challenging times he has overcome, especially during COVID-19.

“I think I have the ability to continue that progress and provide for that leadership based on, you know, my working record over the past 42 years,” he said. “I appreciate the opportunity to serve the students of Putnam County, and I feel like we’ve made a lot of progress. I think over the next four years, we’ll continue to make a lot of progress and make Putnam County a great place to live, work and play.”

Daniella is a reporter for WUFT News who can be reached by calling 352-392-6397 or emailing news@wuft.org.
Previous Florida Government Officials Are Resuming In-Person Meetings
Next Nov. 2, 2020: Afternoon News In 90