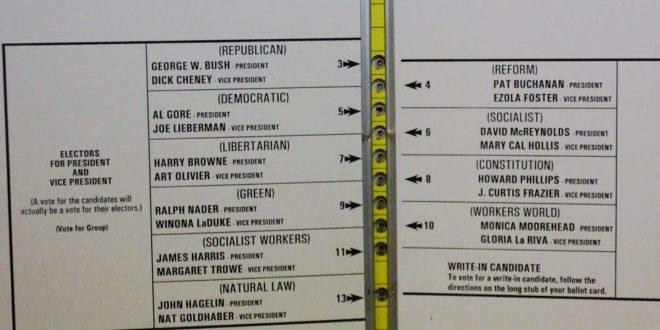 FORT LAUDERDALE — Even if the presidential election hinges on a Florida recount like 20 years ago, hanging chads and butterfly ballots won’t be around to trip up voters and officials — changes to ballots, equipment and laws have made the Bush-Gore circus a relic never to be revisited, state elections officials believe.

Though there are other scenarios that make elections officials nervous, the computer punch-card ballots that fueled 2000’s chaos are buried in history’s landfill. Casting valid ballots and processing them is now easier, even before Election Day, and the Legislature has enacted clearer laws governing recounts.

The Associated Press spoke with most of Florida’s 67 county elections supervisors or top aides in recent weeks along with voting rights groups, and they expect the system to run smoothly in the nation’s largest swing state, even with the pandemic. And if the winner’s victory margin is razor thin, recounts in 2018 for governor and U.S. Senate, while not perfect, showed the system works even when candidates, elected officials and their supporters apply pressure.

“That was redemption for the state, not only for how we were able to count the votes in the live election but again during a recount,” said Christina White, Miami-Dade County’s supervisor.

Attorney Barry Richard, part of former President George W. Bush’s Florida legal team 20 years ago, agreed that another Florida meltdown is unlikely, saying “we’ve had four presidential elections since 2000 with no problems” beyond small, localized hiccups that “get blown out of proportion.”

The most-likely fear elections supervisors have is that campaigns and the public will expect a winner declared on election night and anything less will signal a breakdown. Not true, they say — under state law, counties have 3.5 days to finish the unofficial count.

“Our focus is on getting this right, not getting done as fast as possible to satisfy all the voices out there clamoring for instantaneous results,” Leon County supervisor Mark Earley said. “You can’t have perfection instantaneously.”

As always, Florida’s 29 electoral votes are key to the national outcome and Trump will face daunting reelection odds if he doesn’t capture them — again putting the president’s adopted home state into the spotlight.

Ironically, Florida could be the first swing state where the media projects the winner. A solid majority of ballots will be cast by mail or early voting — mail voting began a month ago, early voting last week. Unlike Pennsylvania and some other swing states, the counting of those votes has already begun. That tally remains hidden until polls close.

Supervisors expect 90% of all ballots will be counted before midnight — and that might be enough to make the outcome apparent if the margin is big enough.

On the other extreme, if the margin between Trump and Biden is close, eyes will focus on those counties that take until noon Nov. 7 to fully count their ballots. If the statewide margin then is within a half-percentage point — likely about 55,000 votes — a machine recount would occur. If it’s within a quarter-percentage point — about 27,000 votes — there would be a hand recount of rejected ballots.

One area of contention during a recount would be mail-in ballots rejected because voters’ signatures didn’t match what their counties have on file. These voters are notified and have until two days after the election to prove their identity, but many won’t respond. That could lead to challenges before each county’s elections board over whether particular rejections are legitimate.

Liza McClenaghan, chair of Common Cause Florida, said the signature examiners are trained, “so it is not as random as people think. But it is not a court-of-law signature process.”

So what changed since 2000 that makes supervisors confident such a recount won’t lapse into chaos? That election took five weeks of ballot scrutinizing and court battles before Bush, a Republican, was declared the state’s winner over Democrat Al Gore by 537 votes, claiming the White House.

First, there were the infamous punch-card ballots. Voters, using a stylus, made their selections by popping out tiny perforations or “chads.” Some voters didn’t punch completely through, resulting in their ballot’s rejection for having a hanging, pregnant or perforated chad. Officials in major counties examined thousands of these ballots to see if they could determine each voter’s intent — a time-consuming, contentious process.

Now, Floridians cast paper ballots, selecting candidates by filling bubbles that are scanned electronically, like a school exam. There should be fewer rejected ballots and an improperly filled bubble usually requires less interpretation than a dimpled chad.

Also, the recount laws in 2000 had holes and contradictions that created legal challenges, some reaching the U.S. Supreme Court — which eventually ended the recount on a 5-4 vote. The Legislature has spent 20 years revising them — and they got tested in 2018 when Florida’s governor, U.S. Senate and agriculture commissioner races all required recounts.

That created discord, but the system generally worked.

But even with that turmoil, the recount ended in 12 days. Scott and DeSantis won. The only lingering issue: a design flaw in Broward County’s ballot perhaps caused 30,000 voters to skip the Senate race in that Democratic stronghold. Nelson lost by 10,033 votes — but he could do nothing.