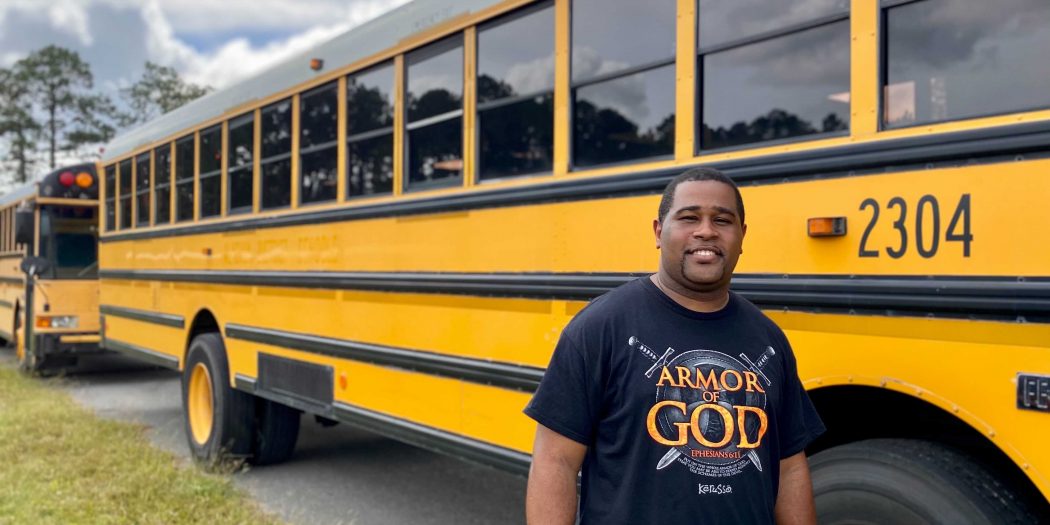 Pastor Warren English hopes to use his bus to bring resources to his community and meet potential members along the way. (Karli Marshall/WUFT News)

By Karli Marshall and Nichole Celotto

When Robin Lalande received the keys to a yellow school bus Wednesday from the Alachua County Public Schools District, she cried.

Two years ago, Lalande, 60, of Robinson Heights in southeast Gainesville, was homeless for six months, alternating her nights between shelters and the homes of her friends, she said.

Now, she is president of a new local nonprofit organization, REIL Works (Reaching Everyone’s Inner Light), and is grateful for how the 32-passenger bus will help expand its services for the homeless, and those who are senior citizens and disabled.

“I feel it can be used for those in wheelchairs who can’t get around and need a means for transportation,” Lalande said. “We’re going to take them wherever they need to go.”

This past year the district bought 80 new buses, which usually results in a surplus traditionally sold through auction, at which each used one sold typically nets about $1,000 each, officials said.

This time, however, the district chose to donate the used buses to churches and nonprofits, in part to help relieve the financial strain the pandemic has caused them, the officials said.

“It’s a great feeling, given what we’ve all been through, what the community’s been through in terms of COVID,” said Paul White, the district’s assistant superintendent for operations. “It’s good to kind of step back and see that people appreciate and are going to benefit.”

More than 150 local organizations applied to participate in the giveaway. Representatives from the groups selected were invited to the raceway, where all of the buses were on display. Using a bingo machine to determine the order, district staff called each representative one at a time to select the bus they wanted, sign the vehicle title and take the keys.

Pastor Thomas Quarles and his wife Diana Quarles came representing Lighthouse Worship and Deliverance Ministries in northeast Gainesville. He sat in the driver seat of their new bus as she watched from the front door. They both approved as his hands glided across the steering wheel and he turned on the engine to check it was running smoothly.

The bus will help extend their faith to community members on the fringes of the city.

“There’s a lot of lost souls that we want to bring in,” Pastor Quarles said. “We’re not a big ministry, but we’re doing the work.”

In northwest Gainesville, Warren English, pastor of Shekinah Glory Family Worship Center, said having a new bus would supplement programs run by his nonprofit, The Vessel.

English said it offers tutoring, GED prep and financial literacy. With the bus, he can shuttle students in the community from their schools to his facility.

Despite how developed it seems, his side of town has pockets of people in need, English said.

He applauded the district for offering the buses to churches and nonprofits like his.

“It was needed,” the pastor said.

Above: Listen to a version of this story, reported by Daniel Scherlacher, that aired on WUFT-FM.

Karli is a reporter for WUFT News who can be reached by calling 352-392-6397 or emailing news@wuft.org.
Previous Meet The Candidates Running For Dixie County Sheriff
Next The Point, Oct. 29, 2020: How Florida’s Governor Had His Voter Registration Altered Two Weeks Before Election Day