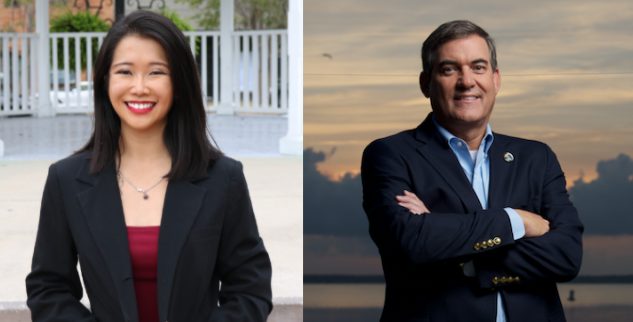 Cynthia Dela Rosa (left) is the Democratic candidate for House District 23. Though she knows how challenging it will be to beat incumbent candidate Stan McClain (right), she feels inspired to help the community she has grown up in. (Photos courtesy of Dela Rosa and McClain's campaigns)

Democrat Cynthia Dela Rosa, 24, is running to unseat Republican Rep. Stan McClain, 59, on Nov. 3. McClain is seeking reelection for his third term in the State House. Both candidates are separated by age, gender, party and experience.

But one thing they do share is a love of their community.

Dela Rosa, 24, is a fresh face on the political scene. A recent University of Florida graduate, she currently works as a registered behavioral technician with children on the autism spectrum. But she’s leaving behind her degree in neuroscience and goals of becoming a doctor to pursue a life of public service.

“I realized there are a lot of good doctors out there, but we need a lot more good politicians,” Dela Rosa said.

Dela Rosa, though enthusiastic, faces a myriad of challenges this election. The first-time candidate is running on a progressive platform in a district that is and has been strongly Republican.

Because of the Republican stronghold in Marion County, Rep. McClain, who according to a social media ad is a “pro-Trump, pro-liberty” candidate, easily won his bid for reelection to the house in 2018.

But this hasn’t deterred Dela Rosa, who remains cautiously optimistic and on the offense. Her campaign strategy has consisted of strong community involvement.

“What’s been very effective for us, especially in the early days of the campaign, has been sitting down and talking to future constituents. We’ve been knocking on doors for the past few months and I think it has let people know that we’re trying to see past party lines to put people first,” she said.

This work paid off in the lead up to the primary election. She gained 75.72% of the district’s Democratic votes, beating out opponent Richard Allen Rowe and securing her spot on the general election ballot.

Dela Rosa has centered her platform, known as The New Direction, on the local issues most pressing to her community. It consists of six main pillars: senior care, the Ocala National Forest, veterans, small businesses, West Ocala and healthcare.

These issues are central to Marion County, which Dela Rosa sees as a place with small town feelings but big city opportunities. An Ocala native, she hopes to use her campaign to amplify those in the community who feel that their concerns have been overlooked.

The topic of healthcare is critical to Dela Rosa, who says expanding access to Medicaid is one of her top priorities. Dela Rosa also supports greater funding of the public education system, a $15 minimum wage, police reform in the form of demilitarization and de-escalation training and a woman’s right to choose.

To her, accessibility is what makes a good representative.

“It’s about a willingness to listen. As a representative, I wouldn’t know how to represent you if I don’t talk to you,” she said.

She questions Rep. McClain’s accessibility to his community, claiming that he has declined invitations to past potential candidate forums. McClain’s absence on the campaign field, Dela Rosa says, has disappointed her not only as a candidate but also as his current constituent.

Save for a few mailers sent to Republicans in the district, Rep. McClain does not seem to be campaigning on the ground as actively as his opponent. He has, however, taken to social media to share information about the election and connect with his supporters.

But in a district so strongly red, McClain’s lack of an on-the-ground campaign may not be such an issue. He faced no challenger in the primaries, and the majority of voters align themselves with the conservative values that he promotes.

His platform, the only information on his website, focuses on six main concepts: job creation in a free-market environment, water conservation in the area’s springs, low taxation, school choice, faith and family, and preservation of the Second Amendment.

His daughter, Mandy McClain, says he’s guided by his family values, respect for small business owners and belief in the American dream.

“My dad is the most honest and ethical person that I know. Everything he works hard for is something he believes in,” she said, and added that he’s not above speaking with and listening to those in the community about how he can be a better leader.

McClain was first elected to the Florida House of Representatives in 2016. Before that, he spent 12 years as a member of the Marion County board of county commissioners. So locals have had time to become acquainted with who Stan McClain is.

He doesn’t have to demand visibility in the way that Dela Rosa does.

During the 2020 legislative session, he supported the passage of a Senate bill requiring minors to get parental consent before having an abortion, a house bill that raised the minimum salary for teachers, and the Clean Waterways Act.

Despite his lack of campaigning in the community, McClain’s fundraising efforts have surpassed Dela Rosa’s. So far, McClain has raised $74,182, of which he has spent $15,779.

Direct donations to Florida legislature candidate campaigns are limited to $1,000, but that hasn’t stopped certain companies from donating multiple times to McClain’s campaign. The majority of his contributions come from political action committees and organizations centered around agriculture, construction, housing and land management, and health care. Outside of politics, McClain is a state-certified residential contractor.

Frequent contributors include Rep. Paul Renner’s (District 24) Conservatives for Principled Leadership PAC as well as HCA Florida’s Good Government Group, part of one of the largest private health systems in the state. Other notable contributors are the Duke Energy Corporation’s Florida PAC, Comcast and the Florida Bankers Association.

Since making the decision to run in June 2019, Dela Rosa has raised $11,800 and spent $8,852 of it. Most of her spending has been for social media, which has been a go-to source of activity since the COVID-19 pandemic started.

“These are people within our community. Our neighbors. These are the people that we talk to every day,” Miller said.

“Money in politics, for better or for worse, is a dominant force, and it just so happens that politicians and people in government usually do their jobs on behalf of their donors. And so when you have grassroots movements like ours who get their money from members of that community, that’s who we’re there to serve.”

Miller and Dela Rosa also emphasized the size of their volunteer force. At the start of her campaign, Dela Rosa had around three or four volunteers.

That number has grown to about 40 people over the last couple of months.

As for the remainder of the campaign, Dela Rosa plans to keep knocking on doors and making phone calls in an effort to encourage voter turnout. Florida has shattered previous early voting records in the days since the early voting period began on Oct. 19.

Hannah is a reporter for WUFT News who can be reached by calling 352-392-6397 or emailing news@wuft.org.
Previous Meet the Candidates for State Attorney in Florida’s 7th Judicial Circuit
Next The Lede || Season II Episode IX: Politics and Spooky Celebrations