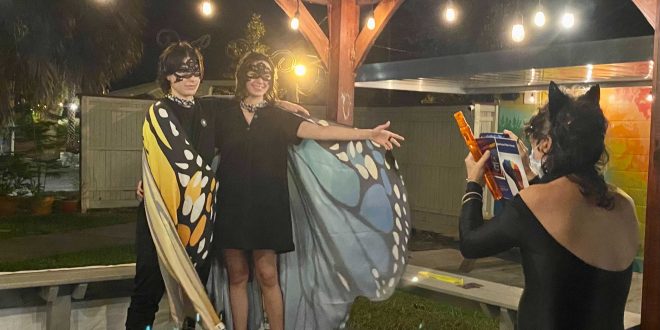 A couple dressed as monarch butterflies pose as another attendee snaps a photo after the costume contest at the queer and transgender community event at Curia on the Drag. (Karli Marshall/WUFT News)

Amid vibrant queer and transgender patrons cheering outside Curia on the Drag in Gainesville, the best overall costume award went to the one wearing the least: A Batman mask and T-shirt.

“He was a friendly veteran,” said one of the patrons, Natalia Dupree, 48, of Brooker, who was not wearing a costume herself. “That is why I screamed for him.”

The winner, who only identified himself as Batman, waved to the crowd and sat back down.

TranQuility and Unspoken Treasure Society co-sponsored the Halloween-themed event at the coffee shop on Monday to allow the nearly 30 spectators to gather in a safe space. They all watched the movie “Nightmare Before Christmas” and sang and danced to Halloween anthems.

Organizers said the trans and queer communities needed a chance to engage with each other again after months of constant quarantining because of the pandemic.

“This is our first time being in person,” said Kane Barr, 32, an agricultural research technician, who is also a coordinator for the local Transgender Day of Remembrance events set for Nov. 20.

According to the Human Rights Campaign, 33 transgender and gender non-conforming people were killed this year in the U.S. The majority of them were Black and Latinx transgender women. In May, Tony McDade, a Black transgender man, was killed by police in Tallahassee. Even in death, many in his community complain, he was misgendered by some media outlets.

Barr said he hopes to broaden events such as at the coffee shop to the general community, while also inviting LGBTQ groups and allies to help provide access to services that help their own.

As a queer, trans person of mixed race, Barr said he shares his story with whoever is willing to listen, whether it’s in a medical setting or a social setting, just to put trans issues out there.

“I can speak for people who are not able to speak for themselves or don’t have the courage to share their stories,” he said.

TranQuility member Nick Antonelli said such events allow those seeking to connect with others who are experimenting with gender expression. Antonelli said gender non-conformists cannot as easily do so by establishing a new identity with alternative pronouns and clothing choices.

During their late 20s, Antonelli began to question their identity and sought to express it accordingly. However, they feared repercussions from those who sought to challenge them.

“Even living in Gainesville, I’m still in the deep South,” said Antonelli, who is now 33 and a software engineer at Shadow Health. Referring to supporters of President Donald Trump, they added: “There’s still that fear, rational or not, that there’s someone with the red MAGA hat who’s got shotguns. Are they going to threaten me or chase me?”

Antonelli then found TranQuility, a community group based in Alachua County that supports transgender individuals, gender non-conforming identities and their allies.

With the group’s support, Antonelli came out as non-binary last year and wants to continue with their gender transition. Antonelli believes that there has been progress with individuals feeling safe enough to begin their journeys, but hostile environments still exist.

“The very thought of someone experimenting is still very much frowned upon or sometimes even punished,” they said. “Now we want to try and give people the space to find out who they are.”

Shelby Scoggins believes the problem stems from a lack of visibility. Scoggins moved to Gainesville two months ago and was drawn to TranQuility and other trans and queer-led organizations because she wanted to find other local LGBTQ people.

As president of the GaYtors, an organization serving LGBTQ students in the master of business administration program at the University of Florida, Scoggins wants Gainesville and UF to do better at showing that there is acceptance and safe space for her community in the area.

Scoggins said UF could uplift queer voices by promoting National Coming Out Day – it was on Oct. 11 – or having more resources for LGBTQ students pursuing a master’s degree.

“In more conservative states, it isn’t easy to encounter these types of people or organizations in your daily life,” she said. “That’s why representation is so important.”

Karli is a reporter for WUFT News who can be reached by calling 352-392-6397 or emailing news@wuft.org.
Previous UF Study Suggests Kratom Could Treat Opioid Addictions
Next The Point, Oct. 28, 2020: A Hurricane Sally Upside: Endangered Shorebirds Have New Nesting Sites