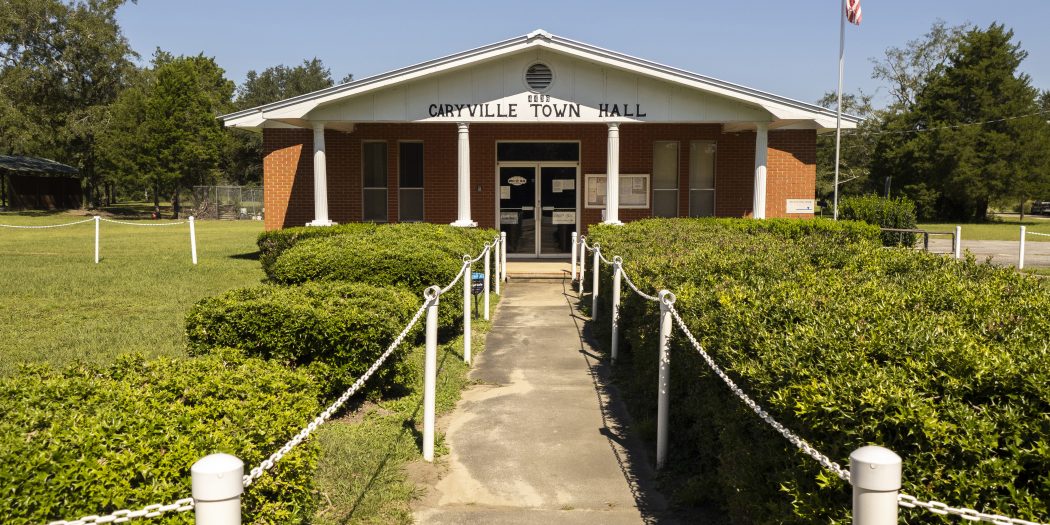 Among the missing records from Caryville Town Hall are financial documents detailing timber sales the town had made and where the money went. The records, believed to show approximately $500,000 Caryville acquired in the deals, had seemingly disappeared. (Emily Felts/Fresh Take Florida)

The no-stoplight, Panhandle town of Caryville has been flooded and burned in its 103-year history but now may be facing its greatest threat: financial ruin.

Bookkeeping is so incomplete that a devastating new state audit couldn’t determine exactly how bad the town’s economic situation is. “There is an increased risk that the town’s financial condition continues to deteriorate,” the audit said.

The current town clerk says he and the council are fixing problems, but Caryville is one of 11 municipalities that Florida considers to be in a state of financial emergency. The town was scandalized a few years ago by reports of money unaccounted for and boxes of financial documents mysteriously carried out of Town Hall by former town officials on a Saturday.

At stake now is whether this close-knit community of about 300 people can survive.

The town bills itself the “Worm Fiddlin’ Capital of the World” — a welcome sign located near one entrance depicts a large, animated worm playing a blue fiddle. Each year, the town holds a “Worm Fiddlin’ Festival” where residents compete over who can coax the most worms from the ground by “fiddling” or driving stakes into the soil. The annual event has long served as one of the municipality’s main sources of pride and revenue.

While the town, which sits along the Choctawhatchee River west of Tallahassee, was once home to more than a thousand residents and one of the largest sawmills in the South, today it’s a close-knit community in which most people know each other by name.

“If we don’t know you, we probably know your grandparents,” said Michala French, 25, who works as an elementary school teacher in Defuniak Springs but is a lifelong resident of Caryville.

Like clockwork, fires and floods have hit the rural town every few decades, whittling down its population from more than 1,000 people in 1930 to fewer than 300 today. After a 1994 flood engulfed most of the town and the Federal Emergency Management Agency bought its flood-ravaged land, hundreds of residents left.

Caryville’s most-recent financial problems go back nearly five years, when a former town clerk was seen hauling away boxes of paperwork. The scene was described in the latest state audit.

“I mean, I live not even a football field away from the Town Hall doors,” former Councilman Timothy Hanes said in an interview. “It was just plain to see.”

Among the missing records from Town Hall are financial documents detailing timber sales it had made and where the money went. The records, believed to show approximately $500,000 Caryville acquired in the deals, had seemingly disappeared.

Hanes and several residents accused former Town Clerk Shakayla Everett and Councilman Henry Chambers of taking the records, but the two denied any knowledge of them. The Florida Department of Law Enforcement began investigating in April 2016, but the probe concluded in 2017 and found no criminal violations, FDLE spokesperson Gretl Plessinger said.

Kent Taylor, Caryville’s current town clerk, said the council is responding to the audit’s findings, and he said the town is in better shape. Caryville has already created an emergency fund and hired a professional bookkeeper, he said.

Chambers, who was re-elected to the council in 2018, could not be reached for comment, despite phone calls to two phone numbers associated with him. A woman who picked up one phone said Chambers wasn’t available and hung up when a reporter identified herself. Another person answered when a reporter called back and said Chambers wasn’t interested in answering questions about the matter.

Although some cities, towns and villages in Florida have recovered from financial crises over the years, others haven’t.

After years of being straddled with debt, the town of Hastings in northeast Florida – which had a population of about 600 — was dissolved into St. Johns County in 2017. In June, the Legislature voted to wipe out the tiny central Florida city of Weeki Wachee, which was previously home to 13 people.

“We’re not at full status yet, but we are on our way now,” Taylor said. “The town is slowly regaining its feet.”

Alex is a reporter for Fresh Take Florida, a news service of the University of Florida College of Journalism and Communications, and can be reached at adeluca@freshtakeflorida.com.
Previous The Point, Oct. 19, 2020: Luxury Student Living Could Soon Rise On This Lot Where Affordable Gainesville Housing Once Stood
Next Oct. 19, 2020: Morning News In 90