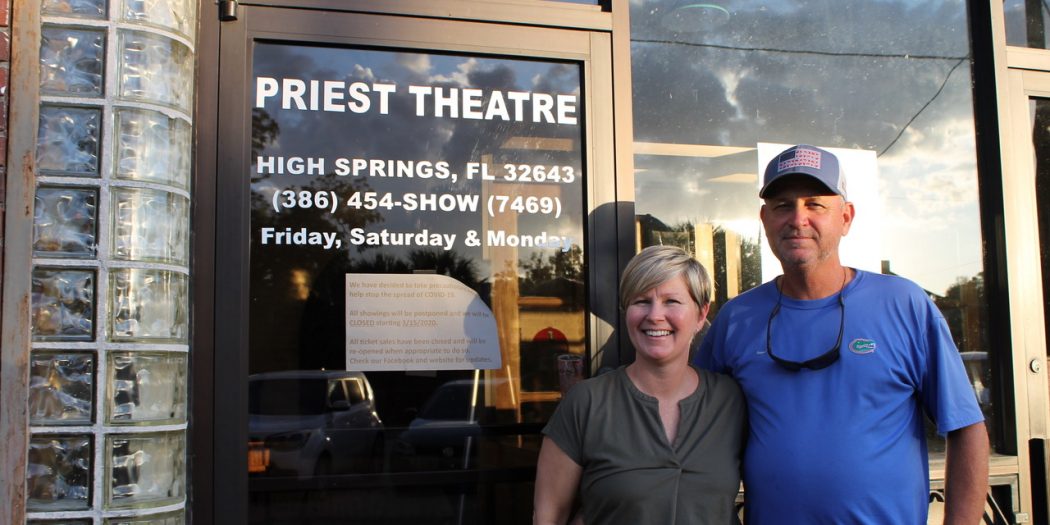 Janet and Alan Alligood, owners of the Priest Theatre, stand in front of the closed doors for one of the last few times. (Nichole Celotto/WUFT News)

‘It’s A Move We’ve Got to Make’: Priest Theatre In High Springs About To Be Sold

The Priest Theatre, a mainstay of downtown High Springs since around 1910, will soon close – another victim of both the changing habits of moviegoers and the coronavirus pandemic.

Alan and Janet Alligood, who since 2011 have operated the business her parents bought 36 years ago, said they expect to complete the sale of it to Living Covenant Church before Oct. 30.

Known for its vintage Coca-Cola decor and classic ticket booth, the Priest Theatre has suffered like many movie houses – old and new alike – during the pandemic, Janet Alligood said.

Alachua County placed temporary restrictions on seating capacity and movie companies weren’t releasing as many box-office hits. Within a three to four-week period, only two new films might be available, with most others offered only in markets deemed the most profitable, she said.

The Priest’s last movie showing was of “Onward” on March 14.

The Alligoods said they didn’t want to cry out again to the community for help to stay open.

“It’s a heavy burden on our entire family,” Alan Alligood, a new city building inspector, told the High Springs City Commission earlier this month. “But it’s a move we’ve got to make.”

The theater was on the market from about a year ago until the Alligoods removed it due to the pandemic. When their real estate agent, Mark Gajda, asked potential buyers about their intentions, he wanted to ensure they would match the community’s needs or interests.

“The last thing we wanted to do was take an icon and have it never come back again,” Gajda said.

High Springs itself considered buying the theater, as David Sutton, the city’s community redevelopment agency coordinator, and Damon Messina, the parks and recreation director, were developing a business plan. That ended when it became clear the church would be the buyer.

W.J. Priest, who owned the Ford dealership in High Springs, built the theater as a place for vaudeville shows before it started showing silent films and then movies with sound. Everyone knew the longtime owners Bobby and Janice Sheffield. Whether it was tearing tickets, running concessions or starting the projector, they did it all with help from their children for 28 years.

Sutton, 44, remembers going to the Priest as a boy, particularly $1 Monday movie nights, and seeing Janice Sheffield walking up and down the aisles to make sure children were behaving.

“Mrs. Sheffield patrolled the aisles like police would patrol the streets,” he said.

The family cared about the community and focused on keeping everyone safe.

“I have great memories at the Priest Theatre,” Sutton said, “and for that, I am forever grateful.”

The Sheffields put it on the market in 2011, until the Alligoods assumed most of the business tasks. That was with Alan Alligood working as a Alachua County Fire Rescue lieutenant, and the couple running their construction company, and caring for the Sheffields and their own family.

In 2012, when it became difficult to receive distributed film reels, the Alligoods developed a Kickstarter project to fundraise toward transitioning to digital. They raised $87,472 in 60 days.

The theater gave everyone who donated a T-shirt, nameplate on a theater chair, free popcorn, drinks, dinner and a movie or posters. All of their names were listed on the back of the shirts and shown on screen before the movies started. The Priest’s first digital film: “The Butler” in 2014.

Many in the community are melancholy to see the Priest close.

“It’s a piece of history,” said Chris Moebus, a co-owner of the High Springs Brewery, across Northwest First Street from the theater. “It’s one of the arteries to this community.”

William “Cody” Sconyers, executive chef at the nearby Great Outdoors Restaurant, also has fond memories of going to the theater as a child, when families went together or teenagers were dropped off by their parents. In recent years, Sconyers said, most people came to town for the springs, but some also for dinner, the antique stores, the local ice cream shop – and the theater.

“It’s definitely iconic to this area,” he said. “To see it go or change into something else would be sad.”

Living Covenant Church is renting a property on Northwest 147th Drive in Alachua City. Attempts to reach a representative for comment were unsuccessful.

The Alligoods said they hoped the church would host community events and perhaps show movies and sell concessions, with funds raised returning somehow to the community.

“They’re not looking at something as a profit,” Alan Alligood said. “They’re wanting to give back.”

Saying the church has people with good hearts, Janet Alligood said, “The building and God will speak to them.”

Nichole is a reporter for WUFT News who can be reached by calling 352-392-6397 or emailing news@wuft.org.
Previous Oct. 16, 2020: Morning News In 90
Next City Of Gainesville To Reopen Playgrounds Beginning Today