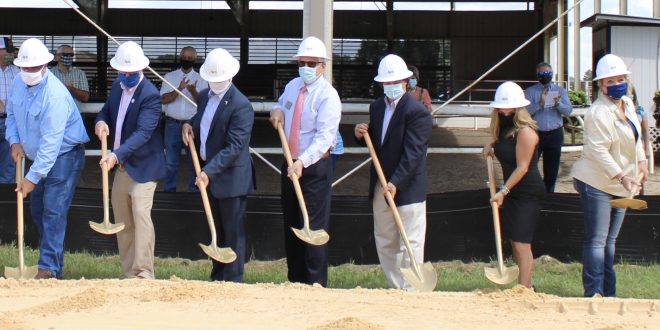 The people involved in the creation of the UF/IFAS Extension Alachua County Headquarters project come together to celebrate by breaking ground with shovels. (Ashlyn Jones/WUFT News)

Alachua County and UF/IFAS held a groundbreaking ceremony on Thursday to mark the beginning of the construction of the new county extension office headquarters.

The new building, located at 22712 W. Newberry Road, is scheduled to be finished by this time next year.

Funding for this project came from Alachua County, the city of Newberry and a Florida Department of Agriculture & Consumer Services grant.

The total cost of the project is $20.5 million, Alachua County Manager Michele Lieberman said. The county provided $13 million of its Tourist Development Tax and General Fund dollars for the project, while Newberry provided $1.5 million. The grant from the State of Florida Department of Agriculture provided $400,000.

State Rep. Chuck Clemons, R-Gainesville, said that the state was excited to help in the creation of this project.

“IFAS is number two globally for agricultural and natural resources research, so this is a powerhouse of an organization and of a university,” UF/IFAS Vice President Dr. Scott Angle said.

“Today we are celebrating the good work of former commissions and staff to finally make this project a reality,” Lieberman said.

The creation of this project took 40 years, Pinkoson said, adding “They kept it together with baling wire, duct tape and chewing gum, but their perseverance was ultimately rewarded, and here we are today.”

The building will be a tribute to the agricultural community, Pinkoson said.

It took Alachua County many years to find the land for this project, but eventually, Newberry came forward to form a partnership and purchased five acres of land for the project, according to Lieberman.

“What I am going to think about as I drive by this new facility each and every day for the rest of my life is the partnerships that had to be formed in order to make this happen. I will remember the desire that existed to compromise, problem solve and to do all of that just for the betterment of the next generation. It was a beautiful process, and it was a beautiful moment,” Marlowe said.

The auditorium will have seats for 300 to 400 people and a state-of-the-art teaching kitchen, Sanders said. Cooking, 4-H and nutrition classes will be offered through the use of this kitchen.

Not only will residents in Alachua County be able to take classes, but they will also have the opportunity to participate in extension programs and 4-H events, as well as Master Gardener and Youth Fair trainings.

Sanders thinks the new building and resources that the UF/IFAS Extension Alachua County has could make the extension office the top in Florida by being able to provide county residents with new programs and opportunities.

“No matter where we are in the county, we are going to serve all citizens. We have been on the east side of the county for 40 years, and we served everybody here in Newberry, Alachua, Micanopy, Waldo, La Crosse, and we will continue to do that” Sanders said.

The people working in UF/IFAS Alachua County Extension are excited to serve the county residents, according to Sanders.

“I can’t go without mentioning Bill Brown. Bill Brown was my predecessor. I was hired in 2001, so I am working on 20 years now, and Bill Brown also was a pusher of the new fairgrounds. Bill told me that I would be retired and gone before I saw this. I proved you wrong Bill. I’ll still be here, and good Lord, willing we’ll be here next year with a ribbon-cutting,” Sanders said.

Ashlyn is a reporter for WUFT News who can be reached by calling 352-392-6397 or emailing news@wuft.org.
Previous St. Augustine Artist’s Work Aims To Inspire Social Justice Conversation In Gainesville
Next Gainesville Remains Undecided On Development Moratorium For Black Communities