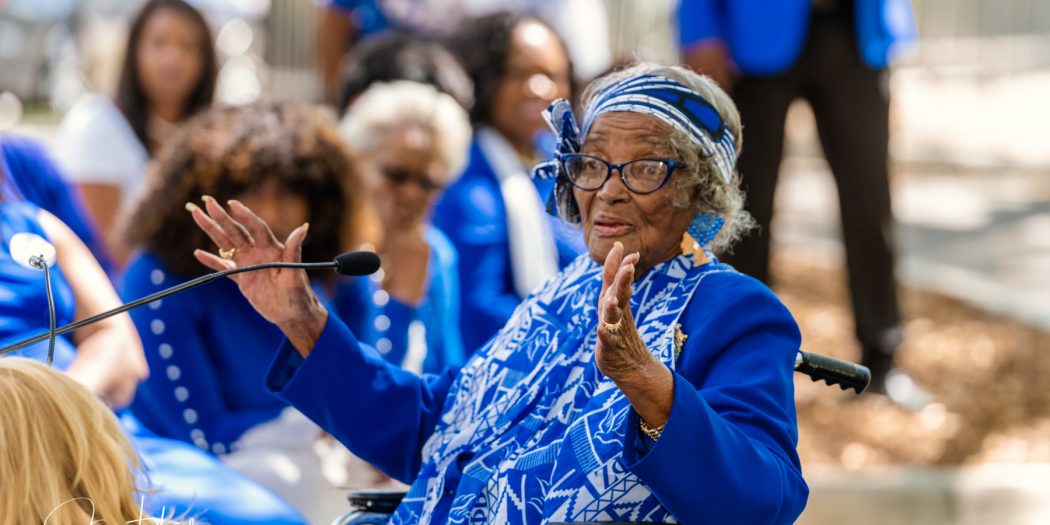 “Her humility, her peace — all of that drew people to her, so when people remember her, they remember the love she showed to others,” said niece Cassandra Gainey.

In late April 1924, Roberson came into the world at her great-grandmother’s hands in rural Edgar, Florida.

The eldest of nine children, she was reared in a small four-bedroom home near the impoverished North Lincoln Heights neighborhood during the heat of Jim Crow, a time plagued by discrimination, segregation and even lynchings against Black people in Alachua County.

Roberson was undeterred and acutely mindful of the shared reality people with skin like hers faced growing up. In an interview for the Samuel Proctor Oral History Program, she recalled her mother would recite to her in encouragement, “If there’s enough ground to walk, there’s enough to plant.”

A devoted reader, Roberson made it her mission to pass her ardent thirst for knowledge onto her pupils and scatter the seeds of social change — throughout the city of Gainesville and beyond.

She attended Lincoln High School, East Gainesville’s segregated school for Black students, long before its doors shut in 1970 after the Brown v. Board of Education Supreme Court decision.

Before heading to Florida Memorial University to receive her undergraduate degree in elementary education, she first dedicated a year working in the University of Florida cafeteria serving military men in training during World War II. After graduating with honors, Roberson began her 34-year-long teaching career.

It was August of 1950 when she got her start teaching veterans four evenings a week at the same all-Black high school from which she graduated. “I really felt very honored to do that,” she said.

In the Alachua County School District, Roberson was one of the first Black educators to teach white students in the mid-1960s at Kirby Smith Elementary, where she eventually served as assistant principal.

For more than three decades, Roberson was an educator in Gainesville who never missed an opportunity to share her strong values with the next generation. She carefully crafted a rigorous curriculum that would challenge and inspire her students, despite the constant reminders from society telling Black children they were second-class citizens.

Roberson played a crucial role in bringing Black Greek-lettered organizations to the University of Florida as a young woman. She was one of five original sorority members who chartered the “Diligent” Delta Sigma Zeta chapter of Zeta Phi Beta Sorority inc. on Sept. 21, 1951.

Later, she was a part of the staff at the University of Florida’s 1966 Summer Institute in English and 1967 Institute of Teachers of Disadvantaged Youth, where her positive influence left an impactful legacy.

Roberson worked hard to be every place she could “to open doors so that the Black people in the community could actually become a functioning part of that community.”

“I was aggressive in that kind of thing,” she chuckled in her oral history interview.

As schools moved to integrate, Roberson worried that efforts to advocate for Black children’s needs would fade into the background with merging some Black and white educational organizations. This, she was determined to change.

Roberson broke barriers as a founding member of the Gainesville Women for Equal Rights, a political action network of local schoolteachers and wives of professors dedicated to ending segregation.

GWER activists played a vital role in integrating local institutions like the Alachua General Hospital, the Library, College Inn, and the Boys’ Club.

With an upcoming race for city commission, it was the same group of interracial GWER activists that sat down at her house one afternoon and said, “Look, we want you to run.”

After receiving the Gainesville Sun’s endorsement, she lost by just 813 votes, but she stood firm despite the loss.

Throughout her political career, the soft-spoken powerhouse battled injustice and uncertainty at every turn: “I was trying to get something done for our community. After I did not win — I lost by a small margin — it still felt good that I had the opportunity to do what I had done,” Roberson explained to the Samuel Proctor Oral History Project.

“But I know one thing that cannot be legislated — love and deep caring for people.”

The avid gardener’s passion for horticulture showed through the giving nature of her beloved garden’s produce. It was not uncommon for Roberson to give away harvests of carrots, beets, and various greens to neighbors and friends.

In a special scrapbook, she preserved a letter complimenting her courageous efforts from then-superintendent William S. “Tiny” Talbot.

“It was during a time where you really did not feel safe going places,” she said. “I guess I felt safer than my husband felt with me sometimes.”

When she had to attend early morning breakfast meetings during her run for commission, Charlie Roberson would rise at dawn and accompany her before leaving for his teaching job.

“He would get up and go with me because he did not think it was safe for me to do this,” she continued.

Aside from her countless accomplishments elevating the community’s oppressed voices, Roberson’s niece Cassandra Gainey believes her most extraordinary feat was her loving marriage, “Now that was really a match made in heaven.”

Roberson’s family remembers her as a joyful spirit whose unwavering principles and convictions led her to manifest the best in people. Tisie Roberson believes her grandmother played a pivotal role in paving the way for Black Americans to achieve a higher place in public life in Gainesville.

“While her strides have taken us a long way, we have not yet arrived. There is still much work to be done,” said Yvette Carter, a close friend and executive board chair of Zeta Phi Beta sorority.

“It is becoming clearer as the days go by that we have to gird up our strength and courage and fortify ourselves in a way that we can carry on her work because we still have a very long way to go.”

The Zeta sisters have each taken away a lesson from Roberson’s legacy, like never giving up on their dreams, always push forward and remain steady.

“For many people, particularly women, she was a trailblazer, and we stand on her shoulders,” sorority sister Alena Lawson said.

“Because sometimes it happens like that, we have to see our friends step out and be first, and that’ll encourage us,” Gainey added.

Over 70 years ago, Cora Roberson was only beginning to imagine an improved future for all in Gainesville; today, her loved ones stress her work isn’t done yet.

“By stepping outside of her box and not showing fear, I think other people have now followed in her footsteps. Nonviolently, most importantly,” Tisie Roberson said.

In 2004, the city declared Oct. 4 as Cora P. Roberson day. Last March, after sweeping petition efforts from Zeta Phi Beta sorority, Tumblin Creek Park at Depot Avenue and Southwest Sixth Street was renamed in her honor. Roberson had advocated for the creation of the park during her run for city commission.

Tisie Roberson shares memories of baking cakes with her grandmother.

“A lot of things I learned, growing up about Black history isn’t written in books. It’s not on the movie screens,” Tisie Roberson said. “There are things that my grandmother told me that make me proud to be who I am. I don’t want to be lighter. I don’t want to be anybody but me.”

Mari is a reporter for WUFT News who can be reached by calling 352-392-6397 or emailing news@wuft.org.
Previous Oct. 16, 2020: Afternoon News In 90
Next SEC Postpones 3rd Game This Week, Moving Missouri-Florida