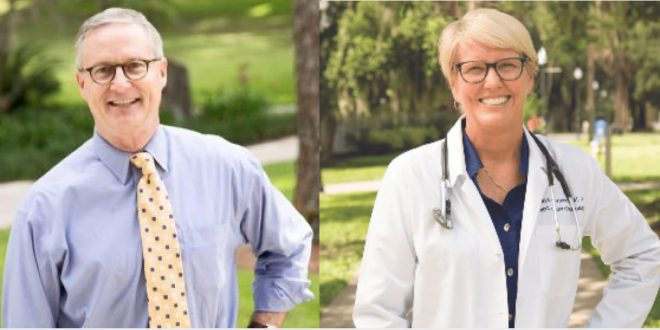 Democrat Kayser Enneking is making her second run at unseating a local Republican incumbent, this time against Chuck Clemons for the Florida House of Representatives District 21 seat.

Enneking in 2018 lost a race by one point to State Sen. Keith Perry, when third-party candidate Charles Goston siphoned off about 2% of the vote.

District 21 is composed of all of Dixie and Gilchrist Counties and the western parts of Alachua County. Clemons has held the position since 2016, beating Marihelen Wheeler that year by over five points and challenger Jason Haeseler by three points.

Clemons said he will spend his remaining campaign time this month sharing what he has already done as incumbent, focusing on natural resources, agriculture and education. Both Clemons and Enneking agree that the environment is a crucial factor in the legislative process.

“You have to have a consciousness of the environment,” Clemons said. Clemons serves as the chair of the State House Agriculture and Natural Resources Subcommittee and has co-sponsored anti-fracking bills, as well as bills that support environmental accountability among counties. The rapid population growth that Florida faces each year is taking a toll on the state’s natural resources, Clemons said.

“Florida’s waterways are under huge pressure just from the amount that we’re pumping out every day for new developments and agriculture,” she said. Should she win election, she said she would like to work on reestablishing the priorities around who needs this water and how it should be regulated. Clemons has supported legislation for natural springs restoration throughout the state.

As for education, Enneking wants to focus on re-investing in public schools. This includes securing funding for physical improvements to these buildings.

“Even if you’re making more money but you’re trying to teach in a room that has a leaky roof and no pencil sharpener, it’s a tough job,” she said.

As Vice President for Advancement at Santa Fe College, Clemons said changing lives through education is important to him. He said he has helped to raise more than $20 million for the college in the past few years in scholarships for underrepresented and first-generation students.

Healthcare has played a major role in Enneking’s campaign. She said passing Medicaid expansion under the Patient Protection and Affordable Care Act throughout the state would be the first issue she’d like to address should she win election.

Florida Medicaid is currently available to residents that meet a specific criteria and whose financial situation is characterized as low income or very low income, according to benefits.gov. A proposed joint resolution for Medicaid expansion, HJR 247 and SJR 224 — which would have expanded coverage to people under 65 who have an income equal to or below 138% of the federal poverty level — died and was indefinitely postponed in March.

Clemons said costs for Medicaid are more this year than the last and is concerned about how big state budget cuts will be in various areas. He said he believes competition will be very intense for scarce resources.

A Florida resident her whole life, Enneking is a practicing anesthesiologist at UF Health and the daughter of a Gainesville doctor. After hearing people say that more physicians needed to run for office, she said she decided to try it herself.

For those whose insurance is tied to their jobs, the economic shutdown due to the impact of COVID-19 has made access to these benefits more difficult, Enneking said.

While Clemons said he is a fan of Zoom meetings because they allow you to meet without risking transmitting disease, his job has been affected as negatively as any other position that relies on face-to-face interaction.

Another issue legislators across the country are beginning to address is the racial inequity present in society, as well as government’s role in addressing it. Florida is no exception. Protests and vigils throughout Alachua County have shown citizens’ interest in holding the government accountable for racial equity.

“If this whole summer of enlightenment, awakening and outrage about racial inequity doesn’t translate into policy and laws being passed, we will have missed a huge opportunity,” Enneking said.

While ideas like demilitarizing the police have polarized the Republican and Democratic parties, Enneking said one policy she believes would have bipartisan support is legalizing the recreational use of marijuana. Doing so would be helpful in ensuring young men of color don’t enter the school-to-prison pipeline, she said. Current laws regarding marijuana disproportionately affect people of color, Enneking said.

Clemons said he does not support the legalization of recreational marijuana use but is for establishing more diverse policies and reevaluating mandatory sentences for drug-related crimes.

When asked what role racial equity plays in his decision-making process, Clemons said he looks not at race but at policy: “I’m looking at policy that benefits the people in my district,” regardless of their skin color.

There is already legislation is place that prohibits discrimination based on factors like gender, race and religion, he said, but he will continue to work to ensure discrimination is not tolerated.

Clemons this year supported the Competitive Workforce Act, a bill that would’ve prohibited discrimination based on sexual orientation and gender identity in Florida. The bill died in the Civil Justice Subcommittee in March.

Enneking at the start of October had raised a little over $440,000 compared to Clemons’ $312,000. Both candidates have spent a little less than half of the cash and in-kind contributions they’ve received.

In one insignificant but unusual development in the race, Enneking recently had to refund a $9 contribution her campaign received from someone in London. Law prohibits contributions from foreign entities.

Clemons said he was not concerned his opponent has outraised him. With just under a month until the election, however, he said the campaign is making a final fundraising push.

Victoria is a reporter for WUFT News who can be reached by calling 352-392-6397 or emailing news@wuft.org.
Previous News In 90: FBI Warns About Fraudulent Voter Resources
Next The Point, Oct. 13, 2020: Hear From The Two Candidates Running To Win Florida House District 21