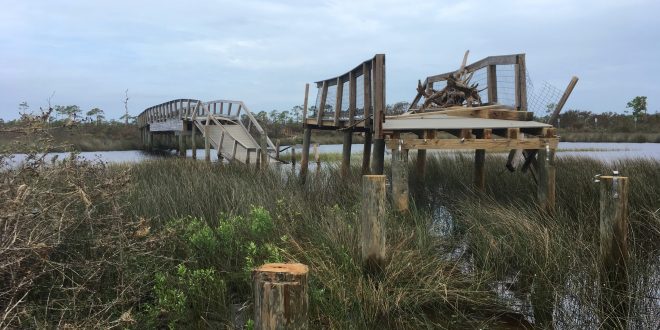 PENSACOLA – The sun hadn’t risen yet when Hurricane Sally made landfall in the Panhandle near the state’s border with Alabama. When its rays finally peeked through the clouds afterward, Florida’s state parks were among the storm’s victims.

The damage comes amid a looming financial crisis in Florida blamed on the pandemic. Budget cuts to state programs are imminent, and destruction from the storm is widespread. It’s not clear when repairs will be completed at some of the more marred parks.

“Restoration efforts are a priority, but there is a lot of work to do,” said Tannyr Lamica Bush, a Florida Department of Environmental Protection environmental specialist who works in several of the impacted parks.

Hurricane Sally tossed waves and wind across the Gulf of Mexico coastlines, relentlessly spewing more than 30 inches of rain in four hours in some areas. It turned roads into rivers and docks into splinters.

The area’s jaw-droppingly beautiful state parks weren’t spared. Their miles of boardwalks, rising from beds of tall grasses, drowned in the ocean that once served as their backdrop. Their trees that danced in the wind were quickly subject to its brutality, falling into trails and paths.

The Department of Environmental Protection estimated damage so far to Florida state parks at about $2.5 million, spokeswoman Alexandra Kuchta said.

The most-expensive damage occurred at Big Lagoon State Park in Pensacola, near the Alabama border, which has only re-opened its boat ramp and some campsites so far. The park offers wooden trails, pavilions for groups and rental kayaks for guests to paddle across its lagoon.

Big Lagoon’s East Beach Day Use Area, which features a series of boardwalks that lead to a two-story observation tower, suffered $523,000 in damage alone. Storm surge had engulfed five of its boardwalks, leaving behind wooden wounds such as impaired handrails and sections missing or mangled. The observation tower experienced damage to its roof, stairs and supports.

The storm rearranged the large Governor’s Pavilion: Entire sections of its boardwalks and observation decks were relocated by storm surge, along with trash cans and wooden benches, according to internal state records. Florida estimated damage at $289,000.

“The flooding was what caused the large amount of debris to be washed into the park, and I imagine it had a primary role in the boardwalks being damaged as well,” she said.

Perdido Key State Park, about 10 minutes west of Big Lagoon, remains closed even weeks after the hurricane with about $700,000 in damages, mostly to eight boardwalks. The storm also shifted two restroom buildings, cracking their tile walls and leaving their floors drooping unnaturally.

Bush said it was unclear when the park might reopen.

Along with depositing debris in some areas, the hurricane also removed parts of parks: Sand beaches that washed away with the water. St. Andrews State Park suffered severe beach problems, Kuchta said.

St. Andrews lies at the opening of St. Andrew Bay along Panama City. Kuchta said the Army Corps of Engineers was already planning to use sand dredged from the navigation channel to rebuild dunes there after disturbances from prior hurricanes.

This story was produced by Fresh Take Florida, a news service of the University of Florida College of Journalism and Communications. The reporter can be reached at bmiller@freshtakeflorida.com

Brittney is a reporter for WUFT News who can be reached by calling 352-392-6397 or emailing news@wuft.org.
Previous Oct. 8, 2020: Morning News In 90
Next Justices Look Again At High-Stakes Marijuana Case