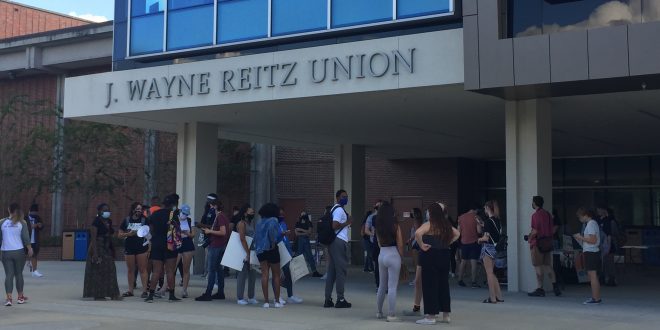 As a crowd of students made their way through the University of Florida on Tuesday, masks on and signs in tow, their chanting rang through the otherwise quiet campus.

The students marched from the Reitz North Lawn to Tigert Hall, where the university’s administration offices are, to call on UF to change the name of the J. Wayne Reitz Union.

The 207,000-square-foot building is home to, among other things, campus student activity offices, the campus bookstore, a hotel and parking garage, a food court and restaurants, a bowling alley and a Wells Fargo bank branch. It was renovated for $70.7 million in 2016.

Reitz has been accused of racism due to his stance as a segregationist. He also allowed the Florida Legislative Investigating Committee, known by many as the Johns Committee, to accuse UF faculty and students of “homosexual behavior.”

The protest was led by two UF groups: the Change Party, one of the student government political parties on campus, and Goddsville Dream Defenders, an activist organization.

Black students such as Dream Defender Kiara Laurent said they are uncomfortable spending time in a building named after someone they consider a racist.

“I can’t go to the Reitz Union and feel like I’m meant to be here,” Laurent said.

Change Party candidate Ryan Wilder participated as a member of the LGBTQ+ community.

“I want to do my part to uplift marginalized voices,” Wilder said.

Calls for changing the building’s name are not new, but they have gained support with the increased focus on social justice following the police killing of George Floyd in Minnesota.

A petition calling for the name change of several UF buildings, including Reitz Union, has received over 7,000 signatures since June 5.

On June 18, UF president Kent Fuchs announced a number of initiatives to address racism on campus, including a task force to assess whether some campus buildings should be renamed.

Though the task force has not yet been formed, the university has begun the process, according to Hessy Fernandez, UF’s director of issues management and crisis communications.

“Ultimately, there will be a process to review all historical namings to determine if they should be retained or removed,” Fernandez said.

The slow pace for creating the task force is part of what led to the protest, Wilder said.

“We wanted to make sure UF followed up with their promises,” he said.

UF is not the only university dealing with this issue.

Campuses across the nation, including the University of North Carolina-Chapel Hill and Princeton University, have made efforts to rename buildings named after controversial figures.

At UF, the protesters said they hope it will rename Reitz Union after Virgil Hawkins, a Black man who fought to be admitted to the UF College of Law for nine years. Hawkins withdrew his application in 1958 in exchange for the desegregation of UF’s professional and graduate schools.

Though the protest focused on Reitz Union, Change Party President Colin Solomon said it was not the only building at UF in need of a name change.

“Reitz is a first step for us,” Solomon said.

Laurent said she hopes the efforts put toward the cause will make it easier for future students.

“The next student will not have to face what I face,” she said.

Laurent also said it’s OK to love UF in spite of its issues, but that love has to come with accountability.

“Just because they’re good, doesn’t mean they can’t be better,” she said.

Rajel is a reporter for WUFT News who can be reached by calling 352-392-6397 or emailing news@wuft.org.
Previous Alachua County Public Schools Turn to HyFlex Learning During Pandemic
Next Alachua County Commission Votes To Dim Solar Plant Proposal