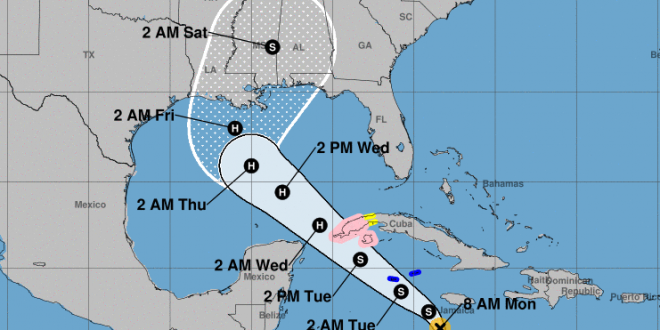 Tropical Storm Delta will likely become Hurricane Delta as it passes from the Caribbean and heads toward the northern coast of the Gulf of Mexico, forecasters say. (National Weather Service)

Tropical Storm Delta, which formed in the Caribbean Sea on Monday morning, is expected to strengthen into a hurricane before reaching the northern Gulf Coast on Friday, the National Hurricane Center says.

“All of Louisiana needs to prepare for Tropical Storm #Delta,” Gov. John Bel Edwards said via Twitter on Monday morning. He urged residents to keep an eye on the news and listen for advisories from local officials.

The system will likely become Hurricane Delta late Tuesday or early Wednesday as it passes from the Caribbean into the Gulf of Mexico, forecasters say. The hurricane center expects Delta’s winds to top 105 mph three days from now, although cool offshore waters near southwestern Louisiana and Mississippi could weaken the storm before landfall.

“Now is the time to put your hurricane plans into action,” the National Weather Service office in New Orleans said on Monday.

Acknowledging “large uncertainty” over the storm’s track and intensity, the hurricane center warns, “there is a risk of dangerous storm surge, wind, and rainfall hazards along the coast from Louisiana to the western Florida Panhandle.”

The exact path of the storm remains uncertain. Delta is expected to stay on a generally northwestern track for several days, but as with other recent storms in the Gulf, it will likely curve more toward the north and northeast as it gets closer to land on Thursday and Friday. The exact timing of those moves will determine which communities face the greatest risk of flooding, storm surge and other dangers.

Delta is currently about 130 miles south of Negril, Jamaica, heading west-northwest at 9 mph, the hurricane center says. It’s expected to bring strong winds and heavy rains to parts of the Cayman Islands and western Cuba as it nears the Gulf. As of Monday morning, Delta’s maximum sustained winds were 40 mph.

The only other time meteorologists resorted to naming Atlantic storms with the Greek alphabet was in 2005, when officials had to use a total of six Greek letters, stopping at Zeta.