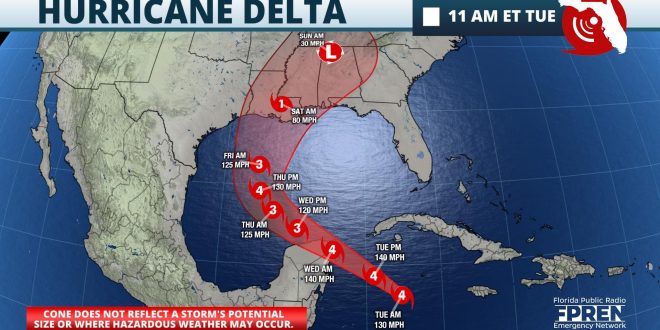 Delta strengthened into a category 4 hurricane with top sustained winds of 130 mph. Additional strengthening is forecast until the center reaches the Yucatan Peninsula of Mexico early Wednesday.

12 hours after the National Hurricane Center classified Delta as a tropical storm, it was upgraded to hurricane status Monday evening. The hurricane continued to intensify overnight as it moves toward Mexico’s Yucatan Peninsula.

As of the mid-morning advisory from the Hurricane Center, Delta was located a little less than 400 miles from Cozumel and top sustained winds had increased to 110 mph. Delta is moving quickly toward the west-northwest near 15 mph. It is forecast to become a category 4 hurricane by tonight and before it reaches the Yucatan Wednesday morning.

The government of Mexico issued hurricane warnings from Tulum to Dzilam, and for Cozumel in anticipation of Delta’s likely arrival. Extremely dangerous storm surge of 6 to 9 feet above normally dry ground was expected somewhere within the hurricane warning area. Tropical Storm Warnings were in effect for parts of western Cuba and the Cayman Islands where the storm was expected to be close to enough to produce tropical storm conditions.

As Delta traverses the deep, warm waters of the northwest Caribbean and southern Gulf of Mexico under light wind shear conditions, rapid intensification is likely to continue until a possible landfall on the Yucatan Peninsula. Similar favorable conditions are in place over the southern Gulf of Mexico, where the hurricane may regain much of the strength it loses over land.

Delta is expected to reach the Gulf later Wednesday before turning north and northeastward toward the northern Gulf coast. A landfall is likely between the coast of Louisiana and the western Florida Panhandle some time late Friday or early Saturday, although the timing of the storm’s arrival is subject to additional adjustments. The most likely arrival of tropical storm force winds is during the daylight hours of Friday ahead of the storm based on the latest Hurricane Center projections.

Somewhat cooler water temperatures in the northern Gulf, increasing wind shear, and drier air are likely to contribute to some weakening before Delta reaches land, but it is not clear exactly how much the hurricane would weaken. Forecasters at the Hurricane Center said there is a significant risk of dangerous surge, wind, and rainfall hazards along the Gulf coast from Louisiana to the western Florida Panhandle, but could not pinpoint where the worst of the conditions would likely occur at this time. They are encouraging residents of these communities to continue monitoring the forecasts this week and to begin preparations if they have not already done so.