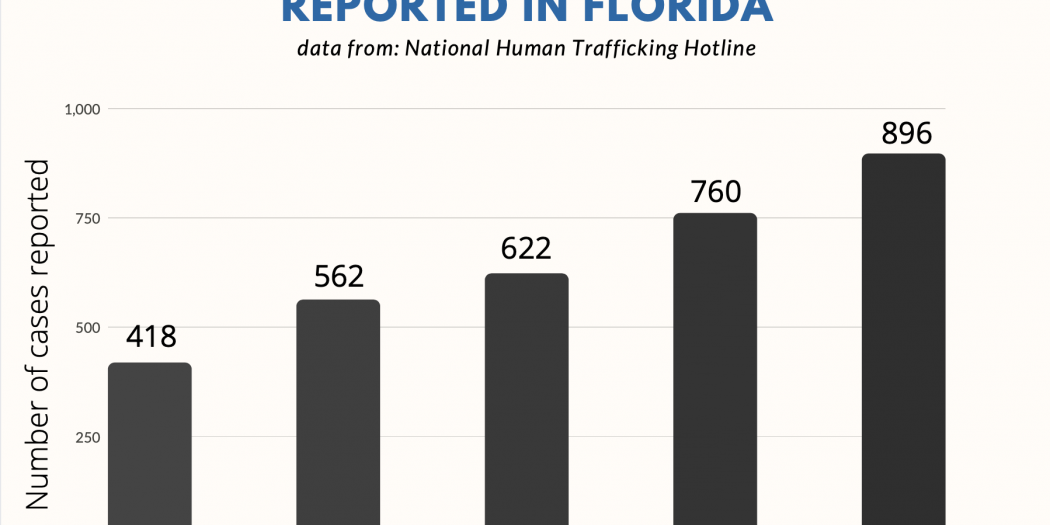 Data obtained from the National Human Trafficking Hotline shows an increase in cases reported in Florida since 2015. 2020 was not included because the data is not yet complete.

Leaders from around Florida discussed their plans to combat human trafficking at the 2020 Human Trafficking Summit online on Tuesday.

In her opening remarks, Attorney General Ashley Moody said that in 2019, the National Human Trafficking Hotline found over 22,000 victims and survivors. In Florida, they found 896 suspected cases of human trafficking.

It’s an alarming number and trend: The number of human trafficking cases reported in Florida more than doubled from 2015 to 2019.

Florida ranks third in the nation in the number of calls to the hotline. The COVID-19 pandemic, as well as the upcoming 2021 Super Bowl in Tampa, is expected to exacerbate these numbers.

“Earlier this year, a teenage victim in Florida was rescued and seven people were arrested and charged with human trafficking of a minor,” she said.

Moody went on to discuss signs that someone might be a victim of trafficking: “Branding scars, burns or tattoos, malnourishment, reluctance to discuss injuries, hesitation to speak freely, or responding if coached, not in control of their own money or identification.”

The summit, which Moody this year chaired, was first launched in 2014.

This is the first year the summit has been held online due to the pandemic. It is available for free through registration and will remain available for viewers for 18 months, according to their website.

In 2019, there were almost 900 participants in the summit. This year, more than 2,000 had registered from every Florida county and 38 states.

“Today, there are as many as 25 million victims of human trafficking around the world” Cartwright said.

He emphasized Florida’s continued high ranking in hotline calls, and said risk factors for trafficking have been amplified by COVID-19.

“Another horrific consequence of the pandemic has been an increased vulnerability among thousands of students and young adults to fall victim to human trafficking,” he said.

Tim Tebow took the digital stage to discuss the impact that his personal experiences had on his dedication to the fight against trafficking.

“We think about it, our timeline and our perspective, but it’s not about our timeline. It’s about their timeline because if we don’t act, they might not have tomorrow,” Tebow said.

He went on to recount the time his father bought four girls for $1,250 in a remote country to rescue them from their traffickers.

Chronister’s presentation detailed the issues that the 2021 Super Bowl might bring to Tampa.

“It’s going to be an opportunity for them to come into the new area and make money. Traffickers make high profit, low risk,” said Detective Ryan Daniels of the Hillsborough County Sheriff’s office.

They explained that in 2015, online escort advertisements went up by 30.3% during the Super Bowl in Phoenix, Arizona, according to a McCain Institute study.

Chronister also discussed the rescue of 22 victims that happened during the 2020 Super Bowl in Miami.

“To be able to identify and rescue 22 over this weeklong Super Bowl just shows us that we have a lot of work to do to get prepared for the Super Bowl in Tampa, Florida,” he said.

Other videos of the summit included segments on labor trafficking of children in Florida, childhood trauma, the impact of trafficking on transgender adolescents and an award ceremony.

“This is an issue that is not political, hypothetical or one coming down the road,” Moody said. “It affects all Floridians. It’s real, and it’s here — in our state, in our neighborhoods and all across our nation.”

Rhianna is a reporter for WUFT News who can be reached by calling 352-392-6397 or emailing news@wuft.org.
Previous Delta Becomes A Category 4 Hurricane As It Approaches Gulf
Next FSU President Tests Positive For Virus, Isolating At Home