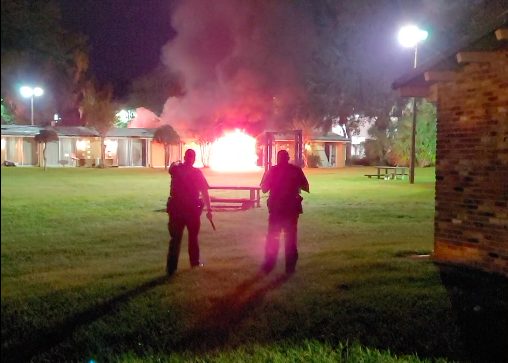 One Occupant Pulled to Safety At Knights Inn Motel Fire

On Oct. 2, crews from Gainesville Fire Rescue responded to a call for a fire at Knights Inn motel. Employees from a nearby business saw smoke coming from one of the rooms and heard a man screaming for help. Bystanders pulled the man to safety as firefighters contained the fire.

According to the incident commander, Jeff Schuhmacher, although the building’s firewalls prevented the fire from spreading, they also caused the fire and heat to build up, making it difficult for firefighters to search for other possible victims.

Despite that, GFR had the room searched and fire out within 13 minutes of the notification, possibly because they spent the past week practicing hose deployment strategies designed for complexes with courtyards — just like Knights Inn motel.

One person was transported in stable condition from the fire, the cause of which was determined to be smoking in bed.

Michael is a reporter for WUFT News who can be reached by calling 352-392-6397 or emailing news@wuft.org.
Previous The Point, Oct. 2, 2020: President Trump Announces He And First Lady Tested Positive For Coronavirus
Next Oct. 2, 2020: Morning News In 90