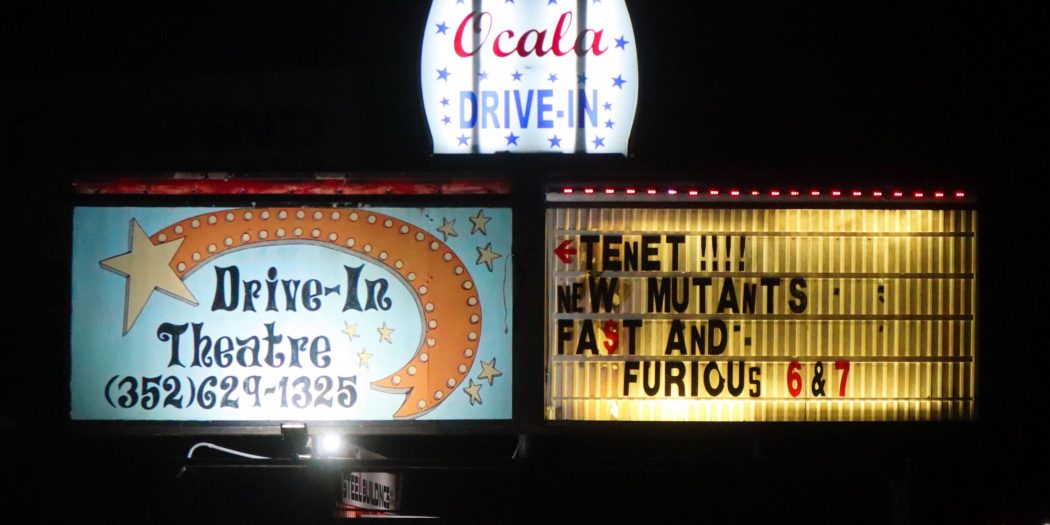 The pandemic began affecting the Ocala Drive-In Theatre when a customer called John Watzke on a Saturday afternoon in March. The man had an immune system deficiency.

Could he buy concessions without fear of catching COVID-19? Not to worry, said Watzke, 63, the theater’s owner and manager. The man could call his cell phone number to place an order and then grab it at the pickup window. Only the theater didn’t have a pickup window.

In the next two and a half hours, Watzke bought a window frame and installed it and a shelf in the concessions building. Two days later, the owner had set up an online ordering system. He also quickly mandated social distancing procedures to keep his guests and employees safe.

“I don’t care what type of disaster you’re facing,” Watzke said of why it was important to meet the moment, not just to keep his business open, but also to help serve the community.

While the coronavirus has forced the shutdown of walk-in theaters nationwide, it has revived the once fading drive-in movie industry. The Ocala drive-in, for example, saw its business skyrocket to a 60% increase in ticket and concession sales compared to the previous year, Watzke said.

Seven drive-ins remain open in Florida and about 305 in the country, according to the United Drive-In Theatre Owners Association. Still, not all were as successful as Ocala.

The Funlan Swap Shop and Drive-In in Tampa closed in March and reopened in May, said its manager, Ruth McPhee, 69. Business there was picking up because of new movie releases, but the average number of cars per night is still down compared to last year, McPhee said.

However, film studios are postponing movie releases again, according to The New York Times. That’s because people did not return to walk-in theaters in the numbers the industry anticipated.

The Ocala drive-in was the only movie theater open in the country for three weeks in April, Watzke said. Its largest increase in business occurred in March, April and May, he said while noting that the theater sold out almost every night for about two months.

Watzke said he felt ready for the pandemic – business-wise, that is – because of his family’s 100 years of industry experience. Coming from a long line of projectionists dating back to 1913, he said drive-in theaters had survived through dire national circumstances of the past.

“I don’t believe in closing,” he said. “The old cliché that the show must go on is not a cliché: It’s a way of life for my family.”

People regularly come to the drive-in from all over Florida and Georgia, he said. Some men would sleep through the movies just to rest before a long drive to get their families home.

On a recent night, Nancy Gordon, 71, and her husband drove about 40 minutes from The Villages to go to her first drive-in for her birthday. It was a last-minute plan, she said.

“What’s good about it is you can be in your car,” Gordon said. “You’re not in an enclosed area with other people.”

The drive-in holds 265 cars with social distancing, down from 450 cars normally. Watzke said it could have sold out every night if at full car capacity. He hated to turn away lines of cars, but prioritized the safety of his guests by refusing to overpack the grounds. He typically holds 10-12 car spaces for groups who drove more than two hours to get there.

Watzke said he increased his number of employees; they now include part-time workers who help deliver concessions to vehicles on the weekends. They all must wear face masks and gloves, and their temperatures are logged every night before they come into work, he said.

Sylvia Mashburn, 37, of Ocala, has been a concessions worker for about three months. It has been her first experience with drive-ins, given her home in Guam did not have any, she said.

Customers not abiding social distancing are told to leave the property, Mashburn said.

“Come out and enjoy life,” she said. “Enjoy not having to stay locked down.”

Watzke said he predicts more drive-ins will open within the next two years because of the amount of publicity they are receiving. He said drive-ins allow moviegoers the freedom to come as they are and not be disturbed by other people.

James Adkins, 33, of Gainesville, said he had not been to a drive-in in over a decade, but came to this one with a friend after doing so a week earlier. It is a safer option to see new movies because of his heart condition, Adkins said.

He added, “You kind of have more of your own personal space – not having to deal with people being on their cellphones, other people being loud.”

The cancellation of his daughter’s commencement from the University of South Mississippi due to COVID-19 inspired Watzke to allow local organizations to use his grounds at no cost. He has hosted graduations for a local vocational school and a nursing program as well as award ceremonies for elementary schools; dance recitals and concerts, among other things, he said.

Finding new movies to show has been difficult, Watzke said. Chain theaters threatened to not show distributors’ movies if they released new ones while those theaters were closed, he said.

“Tenet”, “The New Mutants” and “The Broken Heart Gallery” were the first new releases the theater had shown since March, Watzke said.

More than 3,000 people commented when he asked for movie suggestions on the drive-in’s Facebook page. He showed old movies and contacted independent film companies. He said his customers didn’t care which movie was playing, as long as they had a safe outing.

Taeja Garrick, 19, came with a group of people from Gainesville to take in a movie. It being her first time at a drive-in, she said her favorite part of the experience was laughing with friends.

“I think it’s very cool to be able to go outside and watch a movie with a bunch of friends for only $6,” Garrick said.

Hope is a reporter for WUFT News who can be reached by calling 352-392-6397 or emailing news@wuft.org.
Previous Annual Tour De Felasco Fundraiser Canceled, Though Park Remains Open
Next The Lede || Season II Episode I: Getting Back to Normal Under Abnormal Circumstances