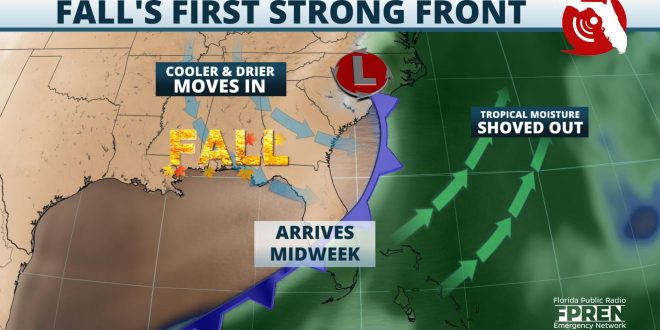 The first strong front of the fall season is set to arrive in Florida this week, with widespread showers and thunderstorms marking its arrival and an autumn-like cooldown likely in its wake.

Moisture has already been on the rebound across much of the state ahead of the front, which was evident by how numerous and long-lasting the downpours were on Sunday. Wet weather is expected again Monday across most of Florida as a weak warm front lifts north. This will be followed by the arrival of a strong cold front Tuesday and Wednesday, producing another widespread round of showers and thunderstorms ahead of it.

Higher levels of instability and deep amounts of atmospheric moisture are forecast to create an environment favorable for the strong storms across the northern third of the state, including the Floridan Panhandle, Tuesday. The strongest cells would be capable of producing heavy rainfall, gusty winds, excessive lightning, and isolated tornadoes. Localized flash flooding will also be possible, especially across already saturated soil in the Florida Panhandle. Showers and thunderstorms are then likely in portions of central and south Florida when the front arrives in these locations Wednesday, with locally heavy rain and gusty winds also possible.

Many Floridians will find a positive side to this approaching cold front, and that is the return of fall-like temperatures and a drier weather pattern that moves in behind it. Daytime highs will only range from the 70s across the Florida Panhandle and portions of North Florida to the lower 80s in areas farther south across Central Florida. Low temperatures could dip into the 50s and 60s across these areas Wednesday and Thursday mornings, and the below-average temperatures and dry conditions are expected to continue through the end of the week.

While the northern two-thirds of The Sunshine State begin to dry out, the front may have trouble clearing South Florida. As a result, a wet pattern could continue in cities like Key West, Naples and Miami through the rest of the week and into the weekend. Weather models are indicating that the cold front will stall near line from Fort Myers to Fort Pierce, allowing the tropical moisture to remain in place and scattered showers and thunderstorms to continue.

This week’s cold front is expected to be the strongest of the season so far, and it would be considered earlier than normal in most Florida cities. For example, a front of this strength wouldn’t typically move through Central Florida until sometime in mid-October.

Even though a period of cooler and drier weather is expected later this week across most of the state, it should be noted that the 2020 Atlantic hurricane season is not over. Tropical storms can and do often develop along stalled fronts of this nature in the Gulf of Mexico or northern Caribbean Sea during the month of October. However, at the present time, there are no tropical threats looming for at least the next five days.

Dr. Athena Masson is a leading hurricane expert and meteorologist originally from Florida who works for the Florida Public Radio Emergency Network. Since surviving Hurricane Andrew in 1992 she has dedicated her life to studying tropical cyclones and other severe weather phenomena.
@@Wx_Goddess
Previous Sept. 25, 2020: Afternoon News In 90
Next The Point, Sept. 28, 2020: State Will No Longer Limit Florida Bars And Restaurants To 50% Indoor Capacity