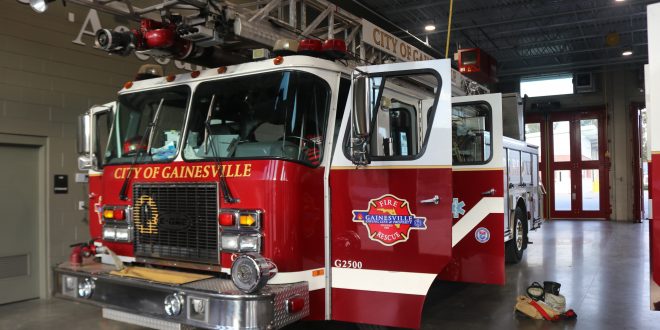 Gainesville Fire Rescue responded to a bus fire at Lincoln Middle School on Sept. 17. The fire was caused by a faulty control arm in the engine compartment. Gainesville firefighters have 90 seconds to get into their full equipment gears, known as “bunker gear.” (Asta Hemenway/WUFT News)

Gainesville Fire Rescue has determined the cause of a Lincoln Middle school bus fire on Sept. 17.

The fire was caused by a control arm near the head gasket of the engine that broke and severed the power steering and hydraulic, or fuel lines, Assistant Fire Chief Joseph Hillhouse said.

“Generally those, whenever they hit at something hot enough to ignite them, you know, that’s whenever we’ll get a fire,” he said.

A student and driver were inside the bus when it began smoking at about 10:45 a.m in the bus loop at the front of the school, said Jackie Johnson, public information officer of the Alachua County School Board. They left the bus immediately and were not injured, she said.

By the time Gainesville Fire Rescue came, the front of the bus was engulfed in flames, Hillhouse said.

About 15 firefighters arrived at the scene from multiple stations and with the use of an automatic vehicle locator, and were faster than the five-minute national standard, he said. The fire had already reached the control panel in front of the driver’s seat. Firefighters had the fire under control within two minutes.

By the end of the school day at 3:37 p.m., the fire and debris was cleaned up, Lincoln Middle School Assistant Principal Bruce Johnson said. Bruce Johnson is unrelated to Jackie Johnson.

It did not affect the functioning of the school, he said, and they did not have to reroute traffic.

“It was a non-issue when the afternoon buses arrived,” he said. “It’s been an unfortunate incident, which could have been a lot worse.”

The bus is insured, Jackie Johnson said, but “we think it’s probably a total loss.”

This morning GFR crews responded to Lincoln Middle School for a bus that had caught fire. Luckily there were no kids on board and the driver and aid were able to self evacuate. There were no reported injuries. pic.twitter.com/Bxy72VWOsv

Above: The district eventually learned one student was on board with the driver when the bus began smoking.

According to Hillhouse, this fire was not due to poor maintenance. He said he couldn’t recall this type of situation happening before with a school bus, “but we periodically will have other buses or other large vehicles that catch on fire for similar reasons.”

Hillhouse said there is no indication that any of the other buses are at risk for this problem, and the Alachua County School Board has good maintenance practices.

“This is an isolated incident,” he said. “I wouldn’t expect it to be repeatable.”

Jackie Johnson, who has been working for the county for 25 years, said she also cannot recall a fire happening like this.

“We have a good protocol in place. We appreciate the fire department responding as quickly as it did,” she said.

Every morning bus drivers have to do a pre-trip inspection involving checking under the hood, and look at fluids and wiring, she said. Every 28 days, a more thorough inspection is done.

“Obviously that’s not necessarily gonna catch everything,” she said.

Hillhouse did not know the age of the bus, but Jackie Johnson believes the bus was one of the oldest buses ACPS has.

“We’re very pleased that this was not one of our newer buses,” she said.

The school district just spent about 8.9 million on 80 new buses, she said, the biggest purchase of brand new buses the district has ever made. It dropped the average age of buses from about 12 years to three years. About 50 or 60 are on the road and more are coming in each week.