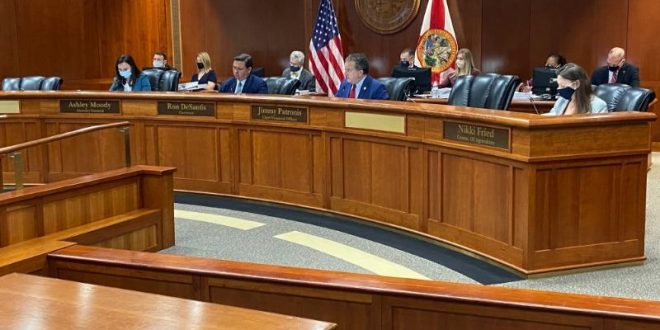 As the number of people being treated for COVID-19 in Florida’s hospitals saw an uptick on Tuesday, Florida Gov. Ron DeSantis expressed concern that the coronavirus pandemic will continue to hurt small businesses and may disrupt commercial real estate

TALLAHASSEE — Florida Gov. Ron DeSantis expressed concern during a Cabinet meeting Tuesday that the coronavirus pandemic will continue to hurt small businesses and may disrupt commercial real estate even after it’s over.

“It seems to me that as you look to see what’s happened, particularly in areas that have done real draconian restrictions on people being able to do businesses, that the pandemic has been a boon for like Amazon and some of these big companies,” said DeSantis, a Republican. “It’s been really difficult on a lot of mom and pops. And you look at these places around the country, some of those will never come back. Period.”

“So they opened at the peak of our infection in Florida — at the peak — and what’s happened since they’ve been opened? It’s gone down, steadily,” DeSantis said. “Closing, I think, is like self-immolation.”

He also said some businesses might realize after the pandemic that working at home could be a cost saver, and that could hurt commercial real estate.

“People are going to look and say, ‘Gee, do I need this expensive downtown office space?'” DeSantis said. “There are some businesses that went 90% remote and didn’t miss a beat. So why would you do that? That’s going to have impact on commercial real estate.”

But he said society can’t shut down, and many people need to show up for work instead of working from home.

“Not everyone can work from home. I mean, we have folks who are waiters, who work at hotels,” DeSantis said. “You can’t do that on Zoom. You’ve got to be there, and these are folks who, most of them are blue collar, most of them need to work to put food on the table. They don’t have the luxury of just staying at home.”

Also on Tuesday, Florida saw an uptick in the number of people being treated for COVID-19 in the state’s hospitals, with 2,329 patients in the late morning, up 60 from the previous day, according to a hospital census posted online by the state.

In Miami, on Tuesday, the board members for the state’s largest school district voted unanimously to push back the gradual start of schools’ reopening until Oct. 14, more than a week later than first proposed.

A soft opening of schools is expected for students in pre-K, kindergarten and first grade, and students with disabilities on Oct. 14. Schools will be fully open for all students who wish to return on Oct. 21. The Miami-Dade County School District’s plan includes a staggered reopening of school buildings amid the pandemic.

The special school board meeting began Monday, but the final vote was delayed by more than 18 hours of public comment. The board on Monday asked questions of district staff and discussed policies before playing the voicemails, which are required to be heard before holding a vote.

The 762 public comments were playing overnight, possibly to no board member listening, the Miami Herald reported. The school board said it does not need a quorum during public comment.

Superintendent Alberto Carvalho has said 51% of families wish to send their children back for in-person learning, the newspaper reported. Miami-Dade County Public Schools is the fourth-largest school district in the United States, comprised of 392 schools, 345,000 students and more than 40,000 employees.

Many of the first 100 comments came from district educators and were largely against reopening schools.

Schools in Palm Beach County opened Monday, with about two-thirds of students and 1 in 12 teachers staying home. In neighboring Broward County, School Superintendent Robert Runcie planned to announce on Tuesday his plan to reopen schools for in-person learning on Oct. 5.