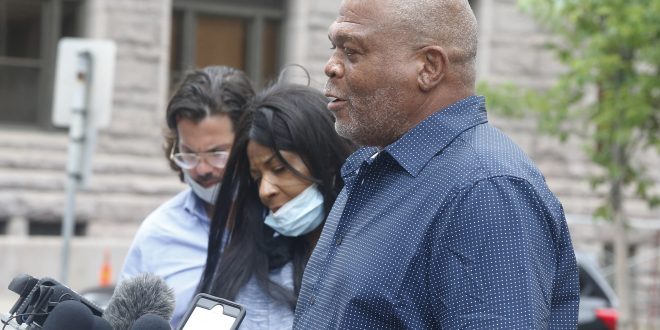 Before becoming the face of the movement, George Floyd was known as Perry, his middle name.

As his aunt, Angela Harrelson, tells it, Floyd ran wild around the house as a little boy. He looked just like comedian Flip Wilson and never wore a shirt. He was a momma’s boy and an athlete.

Floyd was dead for a day, killed by Minneapolis police, before Harrelson heard the news. She saw it on TV first, his death already on its way to drawing international attention in late May.

“There was Perry lying on the ground, saying ‘I can’t breathe,’” Harrelson told a virtual crowd Tuesday during an event co-hosted by two student organizations at the University of Florida. “I just remember dropping to my knees. What did I just watch?”

Harrelson, a registered nurse from suburban Minneapolis, and her brother, Selwyn Jones, who owns a hotel in South Dakota, discussed for an hour the loss of their nephew and path forward for Black Americans and the nation. Mass protests against police brutality ensued after footage of Floyd’s killing – a white police officer knelt on his neck for nearly nine minutes – went viral.

“You didn’t have to see the video,” Jones told the audience, which according to an organizer included 75 viewers watching via videoconference. “Close your eyes, and listen to his moans.”

Listen to his groans, Jones continued. Listen to his anguish and pain, and on the other side, see the hatred and anger, the racism, control and dominance. It has changed everybody, he said.

“What did we do to deserve all the brutality that we’ve gotten?” Jones asked. “We’re just born Black.”

Nyle Fort, a doctoral candidate at Princeton University whose dissertation focused on how acts of public grief shape the struggle for Black freedom, moderated the event. It was sponsored by the Reitz Programming Board and the Gator Chapter of the NAACP.

From separate screens, Harrelson and Jones discussed what it was like to see their nephew transformed into a national symbol. They said his face is everywhere: on murals, on the sidewalk, on the T-shirt that Jones wore during the event itself.

Harrelson said it was overwhelming at first, but not paralyzing, and that she has learned to lean into the momentum of the social movement.

“It was very hard trying to be an activist,” she said. “I had to learn how to balance my emotions and say, ‘You know what? Here’s an opportunity to do something really positive.’”

The aunt and uncle have traveled the country to speak to crowds and participate in protests. Staying active is helping them to survive the grief of watching the deaths of unarmed Black people at the hands of police go viral over and over again, Harrelson said.

Police brutality isn’t the only issue facing Black people, Harrelson said, just like Floyd isn’t the only victim. Complacency, white privilege and silence in the face of injustice are just as toxic.

“Use your white privilege to speak out,” she told the audience, without likely knowing for sure its racial makeup. “You have a voice. If you see something wrong, say something.”

Despite their loss, Harrelson and Jones spoke overwhelmingly of hope.

Harrelson said she finds it in the candles left by strangers at her nephew’s vigil, and the messages of love that come from all around the world in languages she can’t speak.

Without hope, they agreed, Floyd would have died in vain.

“It’s so easy to lose hope in the face of so much death and despair and destruction and environmental devastation,” Fort said. “But Angela and Selwyn – and you – and the people in the streets are a testament that hope is invented every day.”

As the event drew to a close, Fort told the audience that though their quest may seem impossible, organized social movements have a lasting impact.

“If people didn’t fight before us, there wouldn’t be a single Black student at the University of Florida,” he said. “It’s our moral, ethical obligation to make sure that we do the same for the next generation.”

Two seniors from Orlando and studying political science and African American studies at UF said the event was inspiring and emboldening.

Brittany Findley, 22, said that she hasn’t felt hopeful in a while – “as the summer went by, it was one killing after the other” – but that Harrelson’s and Jones’ perspectives helped to brighten her perspective. If they can turn a bad situation in a positive one, surely she can, too.

Rachel Khoury, 21, a member of the NAACP chapter, said she works to dismantle her white privilege and appreciated the calls to hold herself accountable.

“Though we preach Black power, and we preach social justice, I think it’s important to remember that we’re all in this together,” Khoury said. “The fight hasn’t stopped, and it won’t stop.”

Hannah is a reporter for WUFT News who can be reached by calling 352-392-6397 or emailing news@wuft.org.
Previous Composting Business Sees Rapid Growth In Gainesville
Next The Point, Sept. 23, 2020: Concern Rises Over Having Enough Winter Supplies For The Homeless Because Of COVID-19