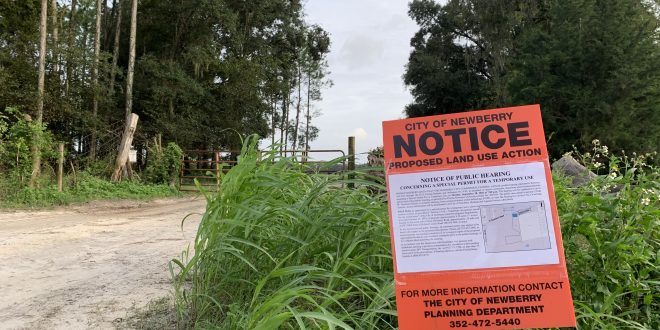 Gainesville band Sister Hazel has requested use of an abandoned Newberry mine for an October drive-in concert. (Chloe Greenberg/WUFT News)

Sister Hazel, the alternative rock band from Gainesville, was set to perform at a music festival in Newberry in the spring, until the pandemic shut down all entertainment venues nationwide.

Now the band wants another shot at a night of live music, but for a vehicle-only audience.

Newberry’s planning and zoning board will decide Wednesday whether to approve Sister Hazel’s bid for a drive-in concert on the site of an abandoned mine in the city on Oct. 23.

The zoning request for special temporary use of the site is fit for a pandemic: socially distanced viewing spots, nonalcoholic beverages, extra safety precautions and more.

“It’s very creative,” Newberry Mayor Jordan Marlowe said. “I’m hopeful that we’re able to get them through the process, and make sure that they can have their concert.”

The board first considered the application on Sept. 8, even though city officials received it only days before, said Bryan Thomas, the director of planning and economic development. The matter was tabled until Wednesday to allow more time for addressing the board’s questions.

“We wouldn’t normally present something in this form to the board, but it’s a unique opportunity, and we didn’t want the city to potentially miss out on it,” Thomas told the board.

If the board approves the project, the city’s adjustment board would review it on Sept. 28.

According to the application and Phil Benito, Sister Hazel’s promoter, the event would be held on land that is an abandoned phosphate mine dating back to the 19th century – part of 230 acres of forest and grassland off State Road 26 heading west from Newberry. Developers have proposed a $3 million plan to build there a grand amphitheater that would draw crowds of up to 30,000 for multiday music festivals, electronic dance events and assorted cultural experiences.

No alcohol would be sold on site, but guests could bring their own, Benito told the board, adding that responsible consumption would be promoted.

Attendees would enter the property in vehicles, and view the concert from their cars, or set up their own space in one of three parking spots designated to each vehicle.

One spot would be for vehicle parking, one for setting up chairs or sitting and one for spacing from others. No on-site construction would occur; an already built stage will be brought in.

“We’ll be able to … get people in off the road, get them scanned in and their wrist bands, and then we’ll escort them to park at that point,” Benito said.

No more than 500 vehicles would be allowed, and tickets would be sold prior to the event only to ensure limited attendance, Thomas said. Each ticket would pay for a vehicle of four people; vehicles with more than four people would be charged more.

“It is a really kind of novel way to have an outdoor concert that will be socially distanced and safe for everybody who attends,” said Thomas, who noted that no more than 2,000 people were expected. “It kind of hearkens back to a drive-in movie theater type of arrangement.”

Newberry would also depend on the Alachua County Sheriff’s Office to help with the expected abundant traffic, he said.

ACSO typically wouldn’t finalize a plan for an event of this size until about 10 days prior, said Art Forgey, the office’s spokesman.

“Sister Hazel has a very big local attraction to it,” Forgey said. “We’ll partner with the Florida Highway Patrol … with Gilchrist County to make sure that everybody is on the same plan, and we can get vehicular traffic in and out safely.”

Sister Hazel’s website suggests that the event would follow the band’s performance in Tampa the night before it appears in Newberry, and then the night after in Orlando.

The band was to headline this year’s WestFest in Newberry, an annual event held in various outdoor locations and offering live music performances, food trucks and a family-friendly atmosphere. That was until the pandemic struck.

“We were excited when we got the call from them, to see if they could hold a much scaled-down concert from the big one that was originally planned,” Thomas said.

Chloe is a reporter for WUFT News who can be reached by calling 352-392-6397 or emailing news@wuft.org.
Previous Alachua County Schools Continue Fire Drills Amid COVID-19
Next The Point, Sept. 22, 2020: Meet The Two Women Running For Alachua County’s District 3 Commission Seat