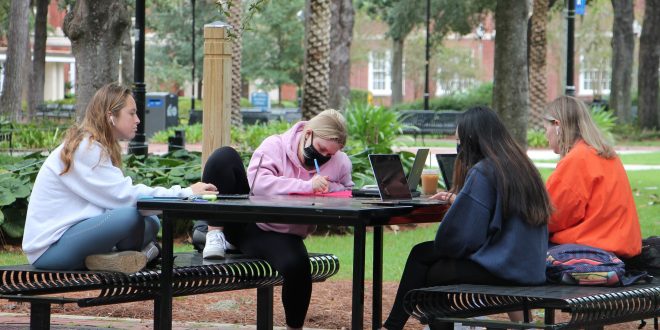 Four students studied together in the Plaza of the Americas on Sunday at the University of Florida. Without a spring break in March, UF students would have 15 straight weeks of school, with the only weekday off being Martin Luther King Jr. Day on Jan. 18. (Addison Pezoldt/WUFT News)

Veronica Humphries of St. Augustine was looking forward to a nice, isolated spring break with her boyfriend. Matt Guernier of Orlando hoped for a theater intensive opportunity that week in New York. Arianna Minnie of Hernando County just wanted some time away from school.

All three attend the University of Florida – and now must prepare to cope with yet another COVID-19 sacrifice: No spring break.

The university announced Friday that its leadership was reviewing plans to extend the coming winter break by one week, so that the spring semester would begin on Jan. 11. As a result, spring break would move from March 8-12 to Jan. 4-8.

Minnie, 21, a senior biology major who enjoys traveling and hiking, said Sunday that she expects to take on a tough course load in the spring and was counting on the break in March to relax.

“I know from other seniors like myself that it is unfair to every student at UF,” she said of the lost break.

UF President Kent Fuchs and Provost Joseph Glover were present Thursday when the measure was presented to the faculty senate for a vote. Seventy-nine percent of the senate supported it.

In an email released afterward to students, faculty and staff, the university said the decision was made in consultation with UF Health – and mostly “to avoid a situation in which students would travel in March, potentially become infected with COVID-19, and return to campus and the Gainesville community to spread the infection as occurred with the 2020 spring break.”

The email also said that “should a spike in cases occur this winter as some experts predict,” a longer winter break may offer “more time for the surge to subside” and, if one becomes available before then, allow more students to receive a vaccine.

Several other schools nationwide have already decided to cancel spring break next semester.

Faculty Senate Chair Sylvain Doré, a professor of anesthesiology, said the university’s plan for the spring was “a reasonable plan to consider.” Of not having a spring break, Doré said, “We understand that it’s going to be challenging physically and mentally for everyone.”

UF pushed back its fall semester start date to Aug. 31 to make returning to school safer, after having suspended in-person instruction and sending its student body home in March.

Student reaction to canceling spring break ranged from supportive to not so much.

Student Body President Trevor Pope said it would be disappointing.

“Many students use this time to do service projects, build their resume, or engage in other experiences to prepare for life after graduation,” Pope, 23, a second-year law student from Gainesville, wrote in an email. “Students have already had so much taken away from them. … I personally don’t believe we should be adding spring break on to that list.”

Humphries, 19, a second-year health education and behavior major, said UF is too focused on students’ physical health and not enough on their mental health.

“I don’t know how I will feel at the end of a freight train of work without any breaks, stops or rests at the end of the semester,” she said.

Guernier, 20, a third-year musical theatre major, said he understood it was a no-win situation.

“Of course, I would love to have a spring break, but I understand it, and they’re doing what they think is best to limit the spread,” he said. “I am glad they just didn’t get rid of the break, and they put it somewhere else.”

Oscar SantiagoPerez, 17, a freshman political science major from Lakeland, said he was not happy to be missing out on yet another part of the college experience he was promised.

“Many of us are told when we’re little that it’s going to be so awesome,” SantiagoPerez said. “It kind of crushes that view that we’ve had put in our heads of college.”

COVID-19 has already hurt the state’s tourism industry, and a mass canceling of spring break nationally would only exacerbate the problem.

“South Florida is a big spring break destination,” said Eric Knowles, president and CEO of the Miami-Dade Chamber of Commerce. “From a tourism perspective, it puts a continued burden on the taxes that are received through the hotels and visitors dining.”

Knowles said, however, that an economic revival can only happen once the pandemic ends.

“More important than the impact of tourism is to make sure we are moving together as a nation and community to do everything we can to prevent the continued emergence and spread of COVID cases,” he said.

Kelena Klippel, 25, a forensic medicine master’s student from Beverly Hills in Citrus County, said UF was smart to be cautious about spring break.

“While most of us say we won’t be out partying and such with friends, we all know at least one person who has already been to house parties or other gatherings mask-less and practicing unsafe behaviors,” Klippel said.

Some students are upset the extra week off will be added to the end of winter break.

Thomas Meadows, 19, a sophomore English major from Yulee in Nassau County, said his spring break plans of white-water kayaking are impossible during the winter.

“It’s a consolation prize that no one is really happy with having,” Meadows said.

Richard Forbes, 20, a tourism and recreation master’s student from Fort Lauderdale, was among those who said the break is misplaced.

“I guess I understand the reason, but I kind of see it as pointless, just because that gives us almost a month away from school, and that’s a very long time,” Forbes said. “After two or three weeks, I’m excited to get back on the grind and working.”

However, without time off in the middle of the spring, some students worry about additional stress, particularly with UF continuing to improve upon its national rankings.

Autumn Brown, 21, a fourth-year criminology major from Gainesville, said students would have to be in full study mode from January to May.

Addison is a reporter for WUFT News who can be reached by calling 352-392-6397 or emailing news@wuft.org.
Previous Stay-At-Home Coronavirus Order Pushed Gainesville Residential Recycling Up About 40% In One Month
Next The Point, Sept. 21, 2020: Universities’ Spring Break Changes Could Worsen Florida’s Hurting Tourism Industry

Florida Says It Will Give More Scrutiny To COVID-19 Deaths

The bonus is designed to reimburse teachers for the extra work and stress from new COVID-19 safety measures and from the required in-class and online options.