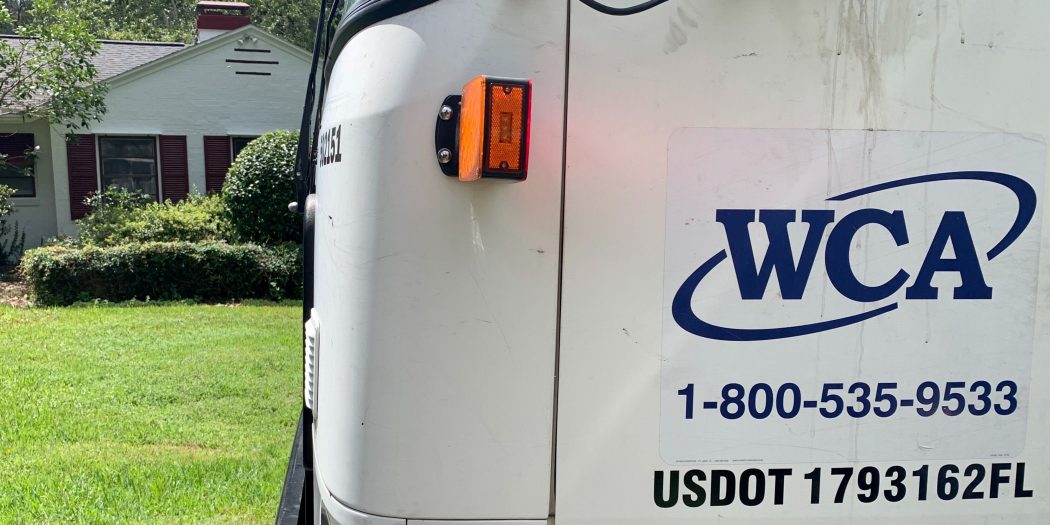 A WCA truck stops in front of a Gainesville house for curbside pickup. The truck, one of 55 that services Alachua County, collected waste and recycling from the respective bins before continuing on its route. WCA is one of the area's privately-contracted trash and recycling collection firms. (Natalia Galicza/WUFT News)

It’s pickup day. The hands that steer collection trucks to Alachua County’s doorsteps, among the hands that empty the orange and blue bins and those that later sort through their contents, now lay veiled under two layers of gloves.

The hands belong to people like Richard Miter, an Alachua County recycling materials sorter. His face is covered by a mask that sits tucked beneath his goggles, which now frequently fog up while working in the humid heat. Beads of sweat rise as his vision falls. He wears a set of latex gloves under his regularly-worn heavy-duty gloves.

Some still wonder whether that’s enough.

“We’re not in a bubble,” said Gus Olmos, interim director of Alachua County’s Solid Waste and Resource Recovery office. Essential workers in the waste and recycling industry, like those one Olmos’ staff, continue to stand at the forefront of a new world. “Everybody’s aware of this pandemic, and people are concerned.”

With COVID-19 morphing life as it was once known, one immovable constant remains: the accumulation of refuse.

The vendor responsible for Alachua County’s residential and commercial pickup of waste and recyclables is the WCA Waste Corporation, whose bolded white letters contrast against a familiar navy blue backdrop throughout town. Servicing 65 daily routes with 67 drivers and 15 full-time helpers, the WCA has enforced additional safety measures to protect its workers since March.

Route drivers and collection helpers must now follow social distancing guidelines and wear a mask when in close proximity to others, according to Michael Roy, WCA’s senior vice president and general counsel. All vehicles used in the collection of waste or recyclables are chemically sanitized at the end of each day.

Despite the added vigilance, handling waste continues to prove risky in terms of germ exposure. Even while maintaining distance and following guidelines, some industry workers worry that a day on the job may open another potential avenue for disease transmission.

“Since March, two of the 130 workers at our Gainesville/Alachua County worksite have tested positive for COVID-19,” Roy said, “both of whom were immediately quarantined as were all other WCA employees who had been in contact with those two workers.”

The county-owned transfer station at the Leveda Brown Environmental Park is where all of the materials collected by WCA come to rest before their rebranding. Solid waste and resource recovery staff gather, sort then bale materials with an increased caution.

“We have the same concerns as everybody else,” Miter said. “I just keep wondering what’s gonna be the new normal.”

Following the positive COVID results of two WCA employees in Gainesville, the enforced quarantine of workers prompted delays in bulk and yard waste pick-up for a week from late July to early August. Otherwise, it’s been business as usual for Alachua County so far.

Not all counties can say the same.

In Clay County, where the hauler is Advanced Disposal Services, recycling collection was suspended for 19 service days from July 21 to August 14.

Current sources of strain on recycling services stem from an increase in residential output alongside a shortage of workers due to potential COVID-19 exposure.

“Collectors went from picking up a little over 16 tons a day to picking up 19 tons a day. That’s a lot of stress on your back, your knees, your elbows — everything,” said Milton Towns, director of environmental services for Clay County. “Advanced Disposal Services had 20% of their drivers unavailable from the 21 to the 14 because they had to adhere to COVID protocol, which means either those missing drivers were symptomatic or had a close contact situation.”

Towns, who used to live in Gainesville, has worked in the solid waste industry for 34 years. He started as a collector in Alachua County, where he served for 19 years.

“A lot of people don’t understand these workers,” Towns said. “They work very hard. There is a lot of training that goes into being a solid waste professional.”

The Bureau of Labor Statistics reported in its 2018 Census of Fatal Occupational Injuries Summary that refuse and recyclable material collectors remain the fifth deadliest occupation nationwide. Route drivers, material collectors and sorters face everyday hazards in the industry, but the onset of a pandemic that has claimed 42 lives in Alachua County alone introduces added risk.

In the weeks and months following the county’s March 25 emergency stay-at-home order, many businesses closed or opened with limited hours, and thousands of residents spent more time at home than ever.

Thomas Strickland, recycling coordinator for the City of Gainesville, found that the city’s residential recycling increased from 358.87 tons in March to 507.17 tons in April. That’s an increase by 148.3 tons in just one month.

Strickland, who began his current position a week before the panic rose in March, said a large portion of that increase is due to residents purging their homes while buying more from online retailers.

Expedited shipping may mean packages come quickly, but the cardboard they come cradled in gets tossed even quicker.

That cardboard, among other materials, must get handled by somebody’s hands — often damp and double-veiled like Miter’s.

Waste and recycling workers continuously clean up after the public. Their current struggles in doing so bring to light the weight of their responsibilities.

“Just like in any other industry,” Strickland said, “we need to keep our workers safe and healthy.”

Correction appended: A previous version of this story and its headline said the 40% residential recycling increase happened countywide, though the numbers were only applicable to Gainesville city limits. It also stated Strickland works for the county, though he works for the city.

Natalia is a reporter for WUFT News who can be reached by calling 352-392-6397 or emailing news@wuft.org.
Previous UF’s Student Union Will Remain Early Voting Location In October 2020
Next UF Primed To Join Schools Across Nation In Canceling Spring Break