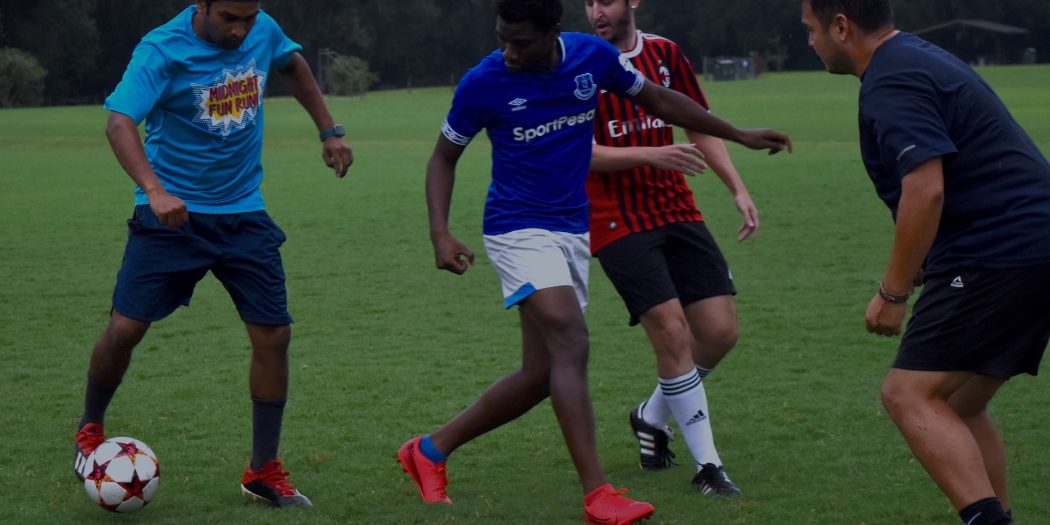 Rain, shine or global pandemic, the pickup soccer scene in Gainesville is alive and well.

“We stopped hugging each other, at least,” said Ramiya Dash, 29. “No more sharing shirts, no more sharing water and no more high-fives. But we still play.”

With so many organized activities canceled over the past six months, it’s been one outdoor exercise that many amateur athletes wouldn’t give up for anything.

The Gainesville Regional Soccer League and the University of Florida Men’s Club Soccer have each canceled the fall soccer seasons, and UF RecSports implemented a distanced form of intramural soccer — soccer tennis — in lieu of the traditional game.

According to Niklas Jacobi, a program assistant at UF RecSports, soccer tennis players must wear a mask, be temperature screened and answer questions about potential COVID-19 symptoms before playing. To limit people present at games, there are no spectators allowed, and only four participants may join a roster. On top of this, all equipment provided will be disinfected before games.

“Given the close-contact nature of the game, I don’t think there’s really a safe way to play traditional soccer right now,” said Justin Griffin, the coordinator for sports programs at UF RecSports. “Soccer tennis has proved to be a good alternative so far.”

As of last Thursday, 25 teams have registered to play intramural soccer tennis with UF RecSports. Registration closed on Monday.

Other organizations, like the UF Men’s Soccer Club, have postponed their soccer season entirely.

“We really tried to play this semester,” said Nicholas Garas, the team’s social media manager. “But as UF COVID-19 guidelines grew more strict around club sports, we thought it best to not play at all.”

According to John Malanchuk, president of the Gainesville Regional Soccer League, all players are itching to get back on the field, but safety comes first. There’s been no fundamental change in transmission of the virus, he said, so the soccer season can’t resume this fall.

Pickup player Dash said that he hasn’t been contacted by the city or UF about playing pickup on their fields.

“To stop playing, I think I’ll have to be dragged off,” Dash said last Friday night.

He laughed before waving over new, unknown park visitors to join the scrimmage, rain pounding the grass.