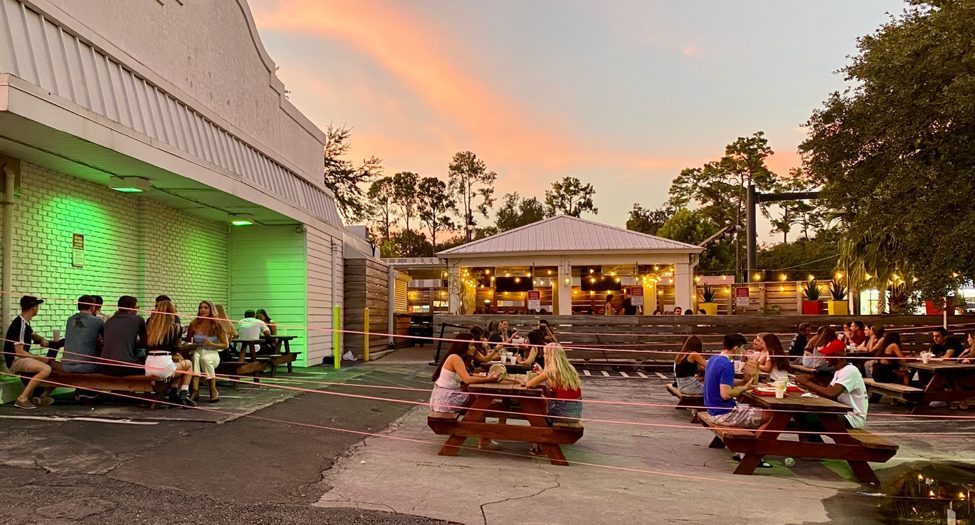 Patrons sit at outdoor tables with food and drinks in the parking lot of Felipe's Mexican Taqueria on University Avenue. (Alexa Mickler/WUFT News)

The Gainesville City Commission took the first step in suspending the enforcement of open containers of alcohol on city property in a meeting on Thursday.

People in Gainesville would be able to consume and possess any alcoholic beverage on property owned and operated by the City of Gainesville, such as parks and public right-of-ways.

City management and city commissioners are concerned about the return of University of Florida students to Gainesville for the fall semester leading to more coronavirus cases, particularly because of large gatherings at indoor house parties.

“A beer in a cup is not the end of the world,” Mayor Lauren Poe said. “It’s about going out with the family to a nice open space and enjoying some safe, socially distanced time with others.”

Still, the move met some opposition on Thursday.

Commissioner David Arreola stated the ordinance “misses the mark,” and that he cannot support it because the ordinance is written “too broadly.”

“House parties are going to happen anyways,” he said. “That is a recipe for disaster, and I can’t even bring myself to say some of the things that I would be worried about.”

A former Gainesville mayor spoke during public comment and voiced concern about underage drinking and the enforcement of other laws.

“While you’re trying to paint it as a nice thing for young people to have a beer in their hand, you’re painting a false picture,” Mark Goldstein said.

Gainesville City Manager Lee Feldman said that since 2019, only two citations were written for open container violations in the city, and those were in conjunction with other offenses.

Another member of the public, Leah White, stated her support for the ordinance, saying it will create “safe spaces” where people can “enjoy the culture of what Gainesville is.”

After communicating with UF Health officials, the city believes this ordinance would be an alternative to people consuming alcohol in large, non-socially distant groups indoors due to operating and capacity restrictions placed on bars and restaurants.

Cliff Harris, the manager of three Midtown bars, believes this ordinance could have been brought up before students arrived in Gainesville.

“They’ve had all summer to decide this stuff, and they’re just doing it now,” Harris said on Wednesday.

Harris stated the city should also discuss closing roads and car parking lots for tables where customers can sit outdoors.

City leaders said they have been working on a plan to encourage more outdoor activity in the Downtown and Midtown areas. Their ultimate goal is to accommodate people outdoors while “extending support to our businesses” by allowing them to serve more people.

Feldman said on Friday the city started working on this over the summer and started discussion in July.

“This is not something you can flip a switch and do,” he said. “This is really the final step.”

If passed, this would only be in effect while the city is in a declared state of emergency due to the COVID-19 pandemic. It could be repealed by an emergency ordinance if it creates an immediate concern.

The ordinance was adopted at Thursday’s first reading with Arreola in dissent. It will be discussed again on Sept. 10, and they plan to launch it on Sept. 12.

Alexa is a reporter for WUFT News who can be reached by calling 352-392-6397 or emailing news@wuft.org.
Previous Four Days, Five Murders: A WUFT-TV Special
Next The Point, Sept. 4, 2020: Open Containers On City Property? Gainesville Leaders Are Discussing It