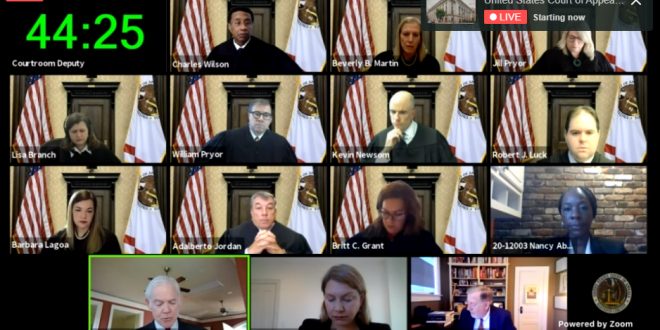 Appellate judges of the U.S Court of Appeals for the 11th Circuit hear arguments Tuesday, August 18, 2020, via Zoom, regarding voting rights for Florida felons who are unable to pay their court fines, fees and restitution. The livestream, which took place the same day as the Florida primary election, experienced technical difficulties 10 minutes after starting, cutting a portion of the state attorney's arguments and questioning. (Zoom frame grab/Fresh Take Florida)

ATLANTA – A lawyer for Republican Gov. Ron DeSantis said under questioning by a federal appeals court Tuesday that felons in Florida do not have a fundamental right to vote after their release from prison, during a hearing in an important voting-rights case that coincided with the state’s primary elections.

The hearing’s broadcast – the courtroom was kept empty of spectators because of the pandemic – suffered from serious technical glitches. About 10 minutes in, judges and their courtroom backgrounds froze. Reporters and other witnesses to the monumental civil rights case could not hear parts of exchanges between judges and the governor’s lawyer, Charles Cooper.

When audio was restored, tensions flared under questioning by U.S. Circuit Judge Adalberto Jordan, an appointee of President Barack Obama. He pressed Cooper repeatedly whether felons have a fundamental right to vote. Cooper eventually said such a right was not fundamental.

“What sort of a right is it then?” Jordan asked.

Cooper said that Florida’s system, which requires felons to pay all court fees and fines before they can vote, is not punitive and gives criminals the opportunity to vote again. He said felons must pay their debts to society.

“The financial terms of a felon’s sentence were imposed because he committed a felony, and the state’s continuing demand that he pay them is not some new and different punishment,” Cooper said.

One of the plaintiffs’ lawyers, Nancy Abudu of the Southern Poverty Law Center, described to judges the difficulty of finding employment as a felon, which creates financial obstacles for those who owe court fines.

She said the legal dispute was about “people who remain marginalized and excluded from our democracy simply because they cannot afford to be part of it.”

The chief U.S. circuit judge, William Pryor, an appointee of President George W. Bush, asked whether Florida can require any felon to pay their fees in order to vote, referring to a 1966 case that declared as unconstitutional a poll tax in Virginia. Pryor further questioned whether enforcing felons to pay fees who are financially able to violates the equal protection clause. Plaintiff attorney Paul Smith called the language of the 1966 written ruling broad and said the true problem is wealth discrimination.

The legal fight before the U.S. Court of Appeals for the 11th Circuit hinges on whether a Florida law that Republicans passed last year amounts to such a poll tax. Florida voters in 2018 had approved restoring voting rights to most felons who are not still in prison or on parole, probation or another form of supervised release. Those convicted of a sexual offense or murder are excluded.

U.S. District Judge Robert Hinkle ruled in May that Florida’s system was “pay-to-vote” because it made no allowances for poor people and because the state’s decentralized courts make it sometimes impossible for felons – or Florida election administrators – to know whether or how much they owe, especially for criminal convictions decades ago.

Tuesday’s hearing coincided the same day with Florida’s primary elections for scores of candidates statewide, including members of Congress, state representatives and roughly half the state’s senators, plus local races for sheriffs, prosecutors, judges, school board members and others. The timetable sowed confusion about whether eligible voters could include hundreds of thousands of felons who couldn’t afford unpaid fines or fees or didn’t know whether they still owed money.

The Division of Elections last week quietly issued new guidelines for such felons. It urged felons unsure about their court debts to request an advisory opinion from the state, and said anyone who can’t pay their fines could petition state judges to terminate their debts or allow them to volunteer for community service instead.

Until the appeals court agreed to review Hinkle’s ruling – and before the U.S. Supreme Court blocked his decision from immediately affecting Tuesday’s elections – Republican Gov. Ron DeSantis had effectively lost at every critical stage of the court battle. Appeals judges have previously ruled at least twice against DeSantis regarding preliminary issues in the case.

The appeals court was expected to rule before November’s general elections, even as the case was almost certain to end up ultimately in the Supreme Court. The deadline to register to vote in Florida for that election is Oct. 5.

The two-hour hearing was unusual because it was a rare session before the entire group of federal appeals judges in Atlanta, not just a three-judge panel. Such “en banc” hearings typically occur only a few times each year and are reserved for cases deemed complex or especially significant.

The ruling could help to determine whether President Donald Trump wins Florida, and the White House, in November. Former vice president Joe Biden has been consistently polling ahead of Trump since mid-April in the critical battleground state.

If they were allowed to vote, it’s unclear whether such new voters would benefit one political party, but Republicans eager to deliver Florida to Trump have been responsible for the voting restrictions on felons. It’s also unclear how many of the newly eligible voters actually will register or cast ballots this year.

Lina is a reporter for WUFT News who can be reached by calling 352-392-6397 or emailing news@wuft.org.
Previous The Point, Aug. 18, 2020: Number Of Reported Coronavirus Cases In Florida Continues To Decline
Next See Coverage Of Florida’s 2020 Primary Election Results

These Were The Bills Of Note That We Covered During Florida’s 2021 Session. Here’s What Happened To Each