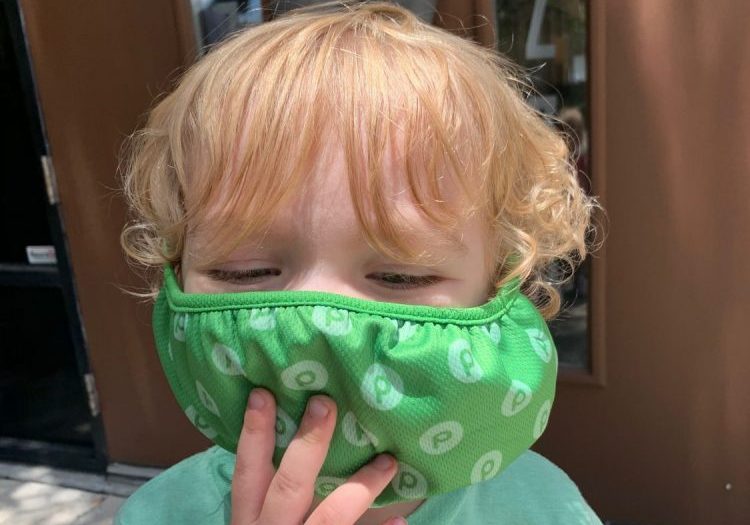 Carter Wolfe poses for his mom as he practices wearing a mask. For some people with autism, sensory processing issues can make precautions like wearing a mask more difficult. (Photo courtesy of Marcia Wolfe)

Exceptional Students Gear Up For the New School Year

Alachua County Public Schools are set to open on Aug. 24, with many students resuming distance learning. But for children on the autism spectrum, that is not the best option.

Danielle Liso, assistant director of the UF Center for Autism and Related Disabilities, said students with autism are generally very hands-on learners and learn best through direct interaction with their instructors.

“Even though individuals with autism tend to be very visual learners, which would suggest that they would do well with online learning, there is not that interactive component that they need,” Liso said. “They really need modeling, they need someone working with them individually and repeatedly.”

Students on the spectrum also benefit from routine. The public school switch to distance learning in March interrupted important routines. The time away from the classroom could also have an impact.

Liso said teachers start every academic year by assessing what students retained from the previous year to fill gaps with what has been lost. This year, given the unique circumstances since March, teachers will have to make this a special focus.

“I don’t think any of us really know how to anticipate how detrimental these five months of lack of school have been,” Liso said.

Liso emphasized that it’s important to stick to the tools that have always been effective —reinforcing positive behavior, modeling good practices and breaking larger tasks down to be more achievable. She believes parents who choose to keep their students at home are capable of doing this as well.

In Alachua County Public Schools, there are close to 4,000 students that are part of the Exceptional Student Education program, according to Donna Kidwell, ESE director. Kidwell said it will be difficult to determine how many ESE students will be returning to school until the school year begins, but she does believe teachers and parents can work together to make the school year successful.

“Building and maintaining relationships with students and families is the best way to teach kids,” Kidwell said.

In regards to following CDC guidelines, Kidwell said some students may have more issues than others. For example, enforcing mask coverings for autistic children with sensory processing issues can be particularly difficult.

Kidwell pointed to this as one of the ways parents and teachers can work together. Prior to school beginning, parents can try to build their child’s tolerance for wearing a mask, even for just a few minutes at a time. Likewise, once school starts, teachers can encourage students to wear them for as long as they can to get used to having it on their face.

Identifying students’ individual needs will assist in the transition to a new school year with new policies.

At Irby Elementary School in Alachua, pre-K ESE teacher Beth Kirby said she is prepared to take on the challenge of the new year and is excited to help her students learn and adjust.

One way Kirby will assist her students is wearing a communication mask with a clear panel over the mouth so they can still see her lips when she talks. She said this will be helpful in teaching the students words and sounds.

Aside from being a teacher, Kirby is also a mother of four. Her son Aidan is going into 5th grade, and he is autistic. Kirby strives to be a resource for the parents as well as the students.

One parent, Marcia Wolfe, attests to how helpful Kirby has been. Wolfe has a 3-year-old son named Carter who is on the spectrum as well. In January, Carter joined Kirby’s pre-K class.

Wolfe said she saw Carter begin to blossom once he started going to class and Wolfe believes it was because of Kirby, as well as being surrounded by other students his age.

When they had to switch to distance learning, Wolfe said Carter would watch Kirby’s class videos multiple times and was very responsive to them.

Wolfe and her husband made the decision that Carter will be resuming in-person instruction in fall. She said it was a hard decision to make, but feels it is in Carter’s best interest.

“We put him in these programs so that it could help him, and if we can’t do that for him, then why did we do it from the beginning?” Wolfe said.

The relationship between parents and teachers is a key component to how Kidwell feels about students going back to school.

“Public education is a mighty machine,” Kidwell said. “I am going to have faith in our teachers and our families.”

Sara is a reporter for WUFT News who can be reached by calling 352-392-6397 or emailing news@wuft.org.
Previous The Point, Aug. 5, 2020: Nursing Home Visits Could Soon Be Allowed Again In Florida
Next Marion County Teacher, Veteran Appeals Termination For Medical Marijuana Use