More Floridians Are Unemployed Because Of COVID-19, Scammers Are Trying To Take Advantage

As if the economic impacts of the COVID-19 pandemic and subsequent job losses weren’t bad enough, those who are now looking for new jobs have an additional worry.

For the thousands who lost jobs due to mandatory shutdowns across Florida and the nation, navigating job listing websites like Indeed or LinkedIn also means watching out for new scams.

Using information from online resumes, scammers sometimes contact their targets and offer fake jobs using the names of real companies. Many who are desperate for work fall victim to these scams in hopes of finding employment.

Victoria Echagaray, 17, of Miami, is one. She posted her resume to CareerBuilder and was subsequently contacted by what later turned out to be a scammer.

“It felt kind of invasive, because they were able to find my information so easily,” Echagaray said.

It began when she received a call about a job and then corresponded with the company through email. The job was a remote position as a system administrative customer service representative.

The position purported to offer $35 an hour —often double what such a job would pay in most parts of the United States.

“It didn’t add up to me, so I was very hesitant … but they made it seem super convincing,” Echagaray said.

After back-and-forth communication with the company, an interview was set up through a messaging app called Telegram, though due to concern about suspicious content in the emails, she decided to not go through with it.

“I figured out that this is 100% a scam,” Echagaray said. She then reported the incident to CareerBuilder and tried to file a police report but was told nothing could be done. Echagaray said she has since received more scam emails that used information from her online resume. 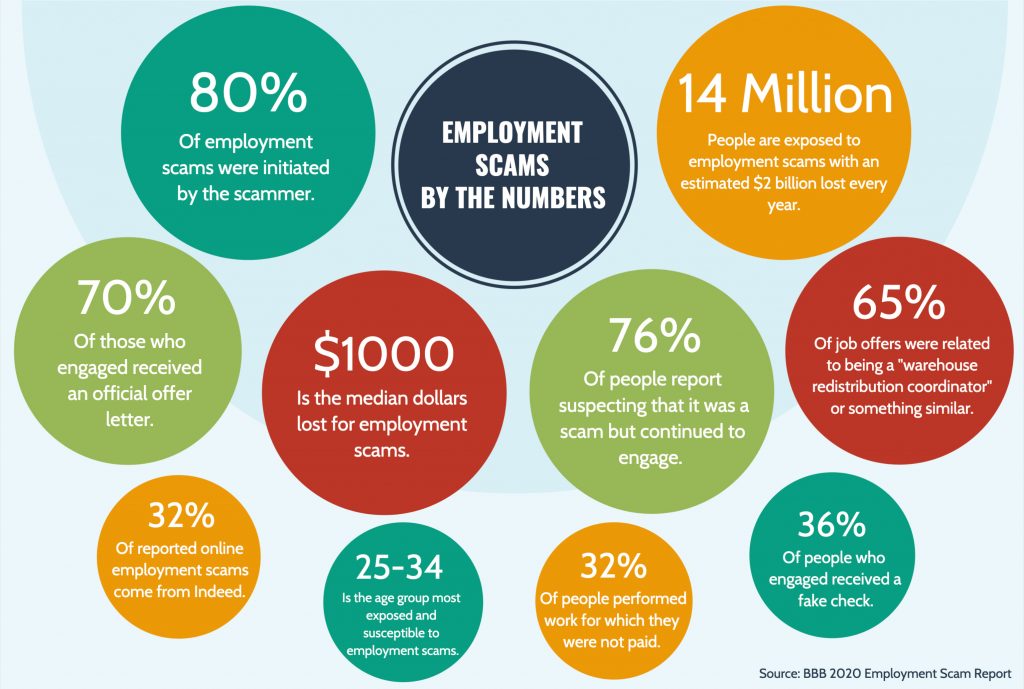 The outcome was even worse for another Miami resident, 22-year-old Elizabeth Biswell, who lost her job at a small greeting card company where she’d worked for five years.

She turned to LinkedIn and Indeed to search for work, posting her resume to both sites, and soon heard from a recruiter claiming to be from a multinational company, Altair Engineering.

“She said I was qualified based off of my resume and quoted certain skills from my resume,” Biswell said.

After a two-hour interview through the app Telegram, Biswell was offered a position of office manager and she accepted.

“I gave them a copy of my driver’s license, the W-4 form, which has your Social Security (Number) on it, and direct deposit information,” she said. Afterwards, she began working for the company from home, saying, “I was to wake up at eight in the morning every morning to train virtually.”

The company then sent her a check for $2,500 to deposit and use to buy equipment in order to work remotely. They asked her to buy the required equipment through their verified seller and pay via PayPal.

“It wasn’t that odd because at my last job I had equipment for my home that I bought myself with my company card,” Biswell said.

Three days later, her bank notified her that the check was fraudulent. After speaking to the company’s supposed HR representative about the issue, Biswell realized the job was a scam.

The scammers were using an Altair domain name to send all emails, impersonating employees of Altair, and using actual videos made by Altair to train employees. The real Altair is aware of the issue and added a disclaimer on its website stating, “We are taking this matter seriously and are working with authorities to attempt to terminate these activities.”

The scammers reached Biswell through Indeed.com, which according to the Better Business Bureau is the most reported online platform for employment scams. A statement from Indeed about the problem reads, in part, “we encourage job seekers to report any suspect job advertisements to us, or if they feel it necessary, to make a report to the police.”

Since the beginning of March, more than 16,000 scams throughout the United States have been reported to the Better Business Bureau Scam Tracker. Of those, 1,184 have been employment-related scams and 1,257 have been COVID-19 related scams.

Within Florida, the state Attorney General’s Office has, since March, issued more than a dozen alerts to help Floridians avoid COVID-19-related scams. The office recommends tips to avoid employment scams, including researching the company before accepting a job offer, looking for red flags in emails such as spelling and grammatical errors and never sending money in the form of checks, gift cards, or wire transfer to secure a job.

Allison is a reporter for WUFT News who can be reached by calling 352-392-6397 or emailing news@wuft.org.
Previous Five Voting Precincts In Alachua County Have New Polling Places For The 2020 Election
Next Florida Delays High School Football Amid Coronavirus Surge