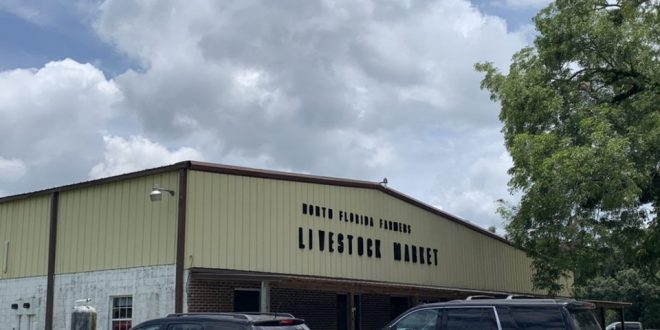 The North Florida Livestock Market has continued to have occasionally busy sales days amid the economic chaos of the COVID-19 era. (Photo courtesy of Stephanie Roberts)

Cattle prices across the country felt the punch that COVID-19 dealt. Livestock markets in Florida were no exception.

Casey Clemons, owner of North Florida Livestock Market, said COVID-19 caused prices to drop in March and prices have not rebounded much since then.

“You know we’re just kind of hanging in there at this point,” Clemons said. “Who knows what’s going to happen from here?”

Clemons also fears that the rising number of cases nationwide will continue to make beef prices in supermarkets increase. Clemons claims that even though beef is more expensive for the consumer now than it has been in the past, the producers are making less money than before.

In May, a group of attorneys general wrote to Attorney General Bill Barr that it appeared beef processors were using their consolidated hold on the market to drive down prices paid to cattle ranchers, while inflating prices for consumers in the grocery store. The Justice Department has since subpoenaed the four largest meatpackers in the United States

“Now you’ve got higher beef prices in the stores, but not for the producers…we’re still getting the same money, if not less, for our cattle than these meat packers,” Clemons said. “They’re making more money now than they’ve ever made.”

Chris Prevatt, a UF/IFAS extension agent who specializes in beef cattle and forage enterprise budgeting and marketing, said cattle markets are in a much better place today then they were back in March.

“For feeder calves in Florida and the Southeast, somewhere between $200 to $300 a head declined. Since those lows… we’ve been able to gain $75 to $125 per head back,” Prevatt said.

Prevatt said cattle prices have a lot to do with the current state of the restaurant business.

“It’s going take restaurants being fully opened with larger capacities to really get cattle prices back to where they were in 2019 and before that,” Prevatt said.

Prevatt said that because less restaurants can open at full capacity, less high-end value cuts of beef are being served, which ultimately creates less profits for beef producers.

Prevatt also said that ground beef prices have skyrocketed because of less meals being eaten at restaurants.

“Consumers are eating more at home. What do they eat a lot at home? Ground beef,” Prevatt said. “The demand for that specific product has increased.”

Prevatt said that a reduction in the demand for ground beef will ultimately be what will bring down the price of the product — a reduction Prevatt believes is still a long way off.

Livestock markets have also had to jump through hoops when conducting their in-house auctions.

Terry Bellamy, office manager at the Ocala Stockyard, said since March they have been able to conduct all their sales except for one.

“We allowed buyers to come as long as they could socially distance themselves,” Bellamy said. “We never had any come in the office and say, ‘there was no room for us today.’”

John Willis, owner of Columbia Livestock Market, said he did not feel as though he lost any business, but he did notice that there were some missing faces at the auctions.

“Age is a big thing in our industry at this time,” Willis said. “So, a lot of older buyers did not come to the sales, but they were represented.”

Markets have also struggled with receiving a limited number of cattle.

“For the first half of the year, this is the fewest amount of cattle that we’ve seen in our sale barn,” Clemons said.

Clemons said ranchers held off on bring their cattle to the market when they saw how low the prices were in March and April.

“Now we’re at the point where people’s calves and yearlings are of size and they have to move them now,” Clemons.

Prevatt believes even though the market prices have increased, it will still be a couple of years before the market fully recovers.

“In terms of how COVID-19 impacted the cattle industry as a whole, it hit us when prices were trending downward… we had prices that were similar to 2011.” Prevatt said. “It’s going to take a reduction in the supply of cattle to get us back to where we were pre-2020. It could potentially be back up in 2022…we’ll just have to see how COVID-19 continues to wreak havoc on all these other markets.”

Brooks is a reporter for WUFT News who can be reached by calling 352-392-6397 or emailing news@wuft.org.
Previous Volunteers Pull Nearly 400 Pounds Of Trash From Sweetwater Branch Creek
Next Anti-Racism Books See Spike In Readership Locally, Nationwide